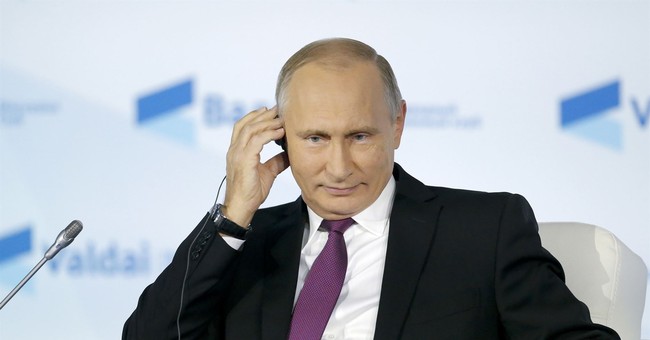 Russia's insidious meddling in our political system is unacceptable and alarming -- a view that ought to be shared by Americans from across the ideological spectrum.  As a vocal supporter the various investigations into this matter, including the special counsel's work, I haven't hesitated to criticize the president himself, his family, and his administration on this front when warranted.  I've also warned against hysterical speculation and conspiracy theorizing; we ought to let the (Republican-led) Senate Intelligence Committee and Robert Mueller's (Democrat-heavy) team conclude their work, then present their findings to the public.  If the White House has been lying in its insistent collusion denials, an enormous firestorm will ensue.  If anyone has broken the law, they should face justice.  And no matter what, active steps must be taken to mitigate and prevent future political tampering by hostile powers.

All of which is a big wind-up to reinforce that I've never walked the Trump line ("hoax," "witch hunt," etc) on the Russia issue.  But as I've also written in the past, ascertaining a complete picture of Russia's influence requires examining all of the facts, and all of Moscow's relevant machinations -- not just the ones that might make one party, or one president, look bad.  And if the media is truly interested in fact-gathering, as opposed to discrediting a political figure they loathe, they should shower attention upon a series of recent stories: (1) From The Hill's dramatic report  last week:

Before the Obama administration approved a controversial deal in 2010 giving Moscow control of a large swath of American uranium, the FBI had gathered substantial evidence that Russian nuclear industry officials were engaged in bribery, kickbacks, extortion and money laundering designed to grow Vladimir Putin’s atomic energy business inside the United States, according to government documents and interviews...They also obtained an eyewitness account — backed by documents — indicating Russian nuclear officials had routed millions of dollars to the U.S. designed to benefit former President Bill Clinton’s charitable foundation during the time Secretary of State Hillary Clinton served on a government body that provided a favorable decision to Moscow, sources told The Hill...

The Obama administration and the Clintons defended their actions at the time, insisting there was no evidence that any Russians or donors engaged in wrongdoing and there was no national security reason for any member of the committee to oppose the Uranium One deal. But FBI, Energy Department and court documents reviewed by The Hill show the FBI in fact had gathered substantial evidence well before the committee’s decision that Vadim Mikerin — the main Russian overseeing Putin’s nuclear expansion inside the United States — was engaged in wrongdoing starting in 2009. Then-Attorney General Eric Holder was among the Obama administration officials joining Hillary Clinton on the Committee on Foreign Investment in the United States at the time the Uranium One deal was approved. Multiple current and former government officials told The Hill they did not know whether the FBI or DOJ ever alerted committee members to the criminal activity they uncovered.

If this story sounds familiar, it's because it came to light prior to the election, thanks to reporting in Peter Schweizer's book, Clinton Cash.  We wrote about the shady, lucrative Uranium One situation, and the Clintons' dissembling about it, at the time.  These new details reveal that the FBI was contemporaneously tracking several of this sordid arrangement's moving parts, including alleged criminal activity, prior to the Obama administration signing over a substantial portion of US uranium interests to the Russians.  The Clinton State Department's sign-off was required for the deal to be approved, and people who stood to gain from said deal put a lot of money into the pockets of the Clintons, both personally, and through their "slush fund" foundation.  For much more on the intricacies of this story, read John Sexton's useful timeline of events, including a review of the key players.

(2) Wall Street Journal columnist Kimberly Strassel accuses Congressional Democrats of helping a Democratic opposition research firm, Fusion GPS, stonewall Republicans who are looking into the company's connections to both Russian interests and an anti-Trump dossier of questionable provenance and accuracy.  Fusion GPS executives are citing the first and fifth amendments in refusing to testify on the matter.  What are they hiding?  Strassel writes:

Fusion is known as a ruthless firm that excels in smear jobs, but few have noticed the operation it’s conducting against the lawmakers investigating it. The false accusations against Mr. Nunes—that he’s acting unethically and extralegally, that he’s sabotaging the Russia probe—are classic...It’s the firm behind the infamous “dossier” accusing Donald Trump of not just unbecoming behavior but also colluding with Russia. Republicans are investigating whether the Fusion dossier was influenced by Russians, and whether American law enforcement relied on that disinformation for its own probe. But Fusion’s secret weapon in its latest operation is the Democratic Party, whose most powerful members have made protecting Fusion’s secrets their highest priority. Senate Democrats invoked a parliamentary maneuver in July to block temporarily Mr. Browder’s public testimony. Rep. Adam Schiff, the Democratic ranking member on the Intelligence Committee, has been engineering flaps to undercut and obstruct Mr. Nunes’s investigation. Democrats on the House Ethics Committee have deep-sixed what was meant to be a brief inquiry to clear Mr. Nunes so as to keep him sidelined. Then there is the intel committee’s meeting this week. Despite the spin, forcing Fusion to appear was Republicans’ only recourse after months of stonewalling.

She goes on to describe Democrats' jaw-dropping and "unprecedented" conduct during the contentious hearing, including Democratic staffers interrupting an elected Republican Congressman to run interference on GPS' behalf. Read the whole thing.

(3) We've also learned this week that the brother of Hillary Clinton's campaign chairman, and his firm, are subjects of Mueller's special counsel probe: "The probe of Podesta and his Democratic-leaning lobbying firm grew out of Mueller's inquiry into the finances of former Trump campaign chairman Paul Manafort, according to the sources. As special counsel, Mueller has been tasked with investigating possible collusion between the Trump campaign and Russia," reports NBC News. "The sources said the investigation into Podesta and his company began as more of a fact-finding mission about the ECMU and Manafort's role in the campaign, but has now morphed into a criminal inquiry into whether the firm violated the Foreign Agents Registration Act, known as FARA."  And then there's this separate report from The Hill explaining how the FBI tracked and thwarted a Russian spy who sought to infiltrate Hillary Clinton's circle of influence:

As Hillary Clinton was beginning her job as President Obama’s chief diplomat, federal agents observed as multiple arms of Vladimir Putin’s machine unleashed an influence campaign designed to win access to the new secretary of State, her husband Bill Clinton and members of their inner circle, according to interviews and once-sealed FBI records. Some of the activities FBI agents gathered evidence about in 2009 and 2010 were covert and illegal...A female Russian spy posing as an American accountant, for instance, used a false identity to burrow her way into the employ of a major Democratic donor in hopes of gaining intelligence on Hillary Clinton’s department, records show. The spy was arrested and deported as she moved closer to getting inside the secretary’s department, agents said.

Some of these developments simply point to the lengths to which the Kremlin was willing to go in order to wield influence within the American political system. Others raise serious questions about Russia's interests potentially aligning with Democrats' political priorities. And the Uranium One story now smells even worse than it did before.  "The Russia Story," therefore, is much larger than alleged Trump "collusion," which remains unsubstantiated (despite Trump's eldest son's apparently fruitless attempt to that end).  Unfortunately, it seems as though some in the media are only eager to discuss the issue if Trump is in the crosshairs.  In fact-checking a presidential comment about the Russia imbroglio -- and yes, Trump's language is often careless and inaccurate, and he seems unwilling to accept the consensus US intelligence position on Russia's meddling -- a CNN correspondent (and former Obama administration official) left Twitter followers with the misleading impression that the IC had proven collusion.  Sloppy reporting:

Once again, a statement contradicted by the FBI, US Intelligence Community, Dem & GOP leadership, and House & Senate Intel Cmtes https://t.co/Rm0bzYIkkh

Meanwhile, other major outlets are either completely ignoring major, narrative-complicating Russia developments, or affording them far less prominent attention than Trump-negative revelations have received.  Is the press interested in getting to the bottom of the Russia matter, or are they interested in hurting Donald Trump?  They'll adamantly answer that it's the former, but do (and will) their actions reinforce that claim?  And while I have you here, I'll leave you with a Russia-related story that reflects quite poorly the Trump administration:

This is a Putin-pleasing injustice that should be reversed. (UPDATE: Reversed. Good).