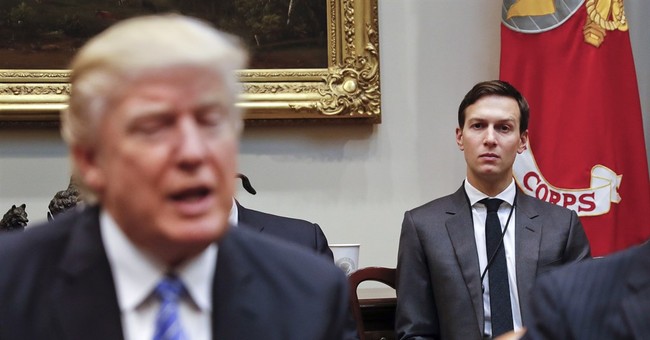 NBC News is out with a new report piggybacking on yesterday's CNN bulletin about investigators looking into a possible undisclosed meeting between members of the Trump campaign and Russian diplomats at a DC hotel last spring. Here's a how the news organizations -- whose coverage of Trump's first 100 days in office was 93 percent negative in tone -- promoted these scoops:

NBC: 5 U.S. officials are aware of classified intel "suggesting there was some sort of private encounter" btwn Trump, his aides and Kislyak. https://t.co/6DCj72Yoms


If the Attorney General -- who has recused himself from the federal Russia probe, which is why his deputy made the Special Counsel call -- failed to own up to another meeting with Russian officials, that revelation would feed into a credibility problem. Sessions testified in his confirmation hearings that he did not have any contact with the Russians during the campaign, which turned out to be untrue: He did, in fact, have two (apparently innocent and incidental) encounters with Russian officials in that time period. Sessions later clarified that he'd answered that question in the context of his role within the Trump campaign, not as a US Senator. If it is confirmed that a third meeting also 'slipped his mind,' this time in a setting much more clearly related to Trump's campaign, that would be another self-inflicted wound. As for NBC's story, it quotes unnamed sources who say that evidence exists suggesting that an undisclosed private meeting between Team Trump and a Russian envoy may have taken place. For people invested in the collusion narrative, including a certain defeated presidential candidate, this might seem significant. But here's what the report itself actually says:


It's worth noting that the headline on this story ends with a question mark, a tacit admission that they don't have anything solid.  Here are the relevant passages backing up my tweeted summary above:

The officials acknowledged to NBC News that the evidence does not amount to proof, and they have declined to provide details about it...It has long been known that Trump briefly met Ambassador Kislyak that day at a VIP reception shortly before he gave a foreign policy address at the hotel. But witnesses said it wasn't a private meeting, and White House officials dismissed it as inconsequential..."Mr. Trump warmly greeted Mr. Kislyak and three other foreign ambassadors who came to the reception," the Wall Street Journal reported in May 2016. Kushner and Sessions were also in the room, contemporaneous news reports say. Sessions' aides have insisted he did not speak to Kislyak...Any confirmation of a private meeting with Kislyak in April would raise a host of questions, most particularly for Sessions.

Proof of a secret private meeting certainly would "raise a host of questions," but right now, there is none -- and NBC's sources say so. Trump administration officials, including Jared Kushner and Jeff Sessions, have denied that any such meeting took place at the Mayflower Hotel that day, as has the Russian Ambassador.  If they're all lying, that's a big deal.  But if this just speculation, rooted in a long-known and previously-reported crossing of paths, this will look like another hedged, caveat-riddled, anti-Trump non-bombshell.  Much of the 'Russia collusion' argument has been fed by a smoke/fire standard.  At the moment, this appears to be manufactured smoke -- unless Congressional or federal investigators uncover anything concrete. Meanwhile, the allegation that President Trump's son-in-law initiated a sketchy, private back-channel with Moscow during the presidential transition was a hot story earlier in the week.  Details of that Washington Post report have been disputed, including conflicting accounts about whether or not Mr. Kushner first floated the idea of using the Russians' secure communications systems for those proposed discussions.  But the degree to which that whole interaction might be inappropriate or troubling depends on the nature and sequencing of what really happened.  I analyzed that component of the never-ending Russia saga on Fox on Tuesday:


If the Russians initiated the chat, which Trumpworld viewed as a one-off conversation about Syria, that would be a lot less worrisome than if Kushner had made first contact, and had more self-interested topics in mind. Maybe the Kremlin reached out about Syria policy, and Kushner -- a newbie to geopolitics -- assented, effectively asking, "why don't we do it at your place?"  That's very different than a scenario under which Kushner drove this train all along, perhaps angling to use the Russians' secure comms lines in order to shield conversations about business dealings from US intelligence agencies. The president's son-in-law (who initially didn't disclose a December meeting with a top Russian bank executive on his security clearance forms, which he shrugged off as an oversight) has indicated that he's willing to tell his side of the story to Congress, under oath. Oversight committees should take him up on that offer.