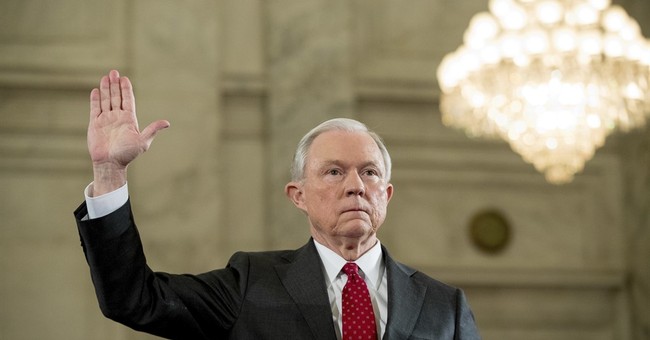 UPDATE II - Sessions has recused himself from investigations relating to the Trump campaign, which is an appropriate step. His statement is HERE.

UPDATE - Sessions will hold a press conference at the top of the hour, so we'll see his response to this controversy.

The latest media firestorm over the Trump administration surrounds an apparent discrepancy between what Attorney General Jeff Sessions testified during his confirmation hearings, and what we now know to be the case. Before drawing any conclusions, it's important to focus on the actual facts and context of the relevant exchanges. In written testimony, Sessions responded to a question from Vermont Democrat Patrick Leahy, who asked if Sessions had engaged with any Russian officials "about the 2016 election." Sessions responded, "no." Based on all available information, this was a truthful answer, as Leahy asked specifically about the campaign. A separate back-and-forth with Minnesota's Al Franken is more complicated and problematic for Sessions -- but is not, in my view, evidence of perjury or sufficient grounds to demand the Attorney General's resignation, as many top Democrats have rushed to do. Here is the full discussion, beyond the shorter snippet that most news accounts are playing:

FRANKEN: CNN just published a story alleging that the intelligence community provided documents to the president-elect last week, that included information that “Russian operatives claim to have compromising personal and financial information about Mr. Trump.” These documents also allegedly say “there was a continuing exchange of information during the campaign between Trump surrogates and intermediaries for the Russian government.” Again, I’m telling you this as it’s coming out, so, you know. But if it’s true, it’s obviously extremely serious, and if there is any evidence that anyone affiliated with the Trump campaign communicated with the Russian government in the course of this campaign, what will you do?

The wind-up to Franken's eventual question dealt with a CNN report about an alleged "continuing exchange" of information between elements of the Trump campaign and the Russian government. (It should briefly be noted that the even the New York Times and subsequent CNN reporting quoted unnamed officials -- their leakers -- who emphasized that there is no evidence of improper collusion). Franken was directly and specifically addressing a controversy within the framing of the presidential campaign.  Sessions responded that he "did not have communications with the Russians."  That's not true, broadly speaking: Sessions met with the Russian ambassador twice during the campaign, which his office now admits: One discussion was in Sessions' office -- which was not unusual due to his capacity as a member of the Senate Arms Services Committee; the other was a spontaneous interaction with other Senators at an event sponsored by the Heritage Foundation.

In light of the raging controversy about Trumpworld's supposed ties to Russia, and Democrats' eagerness to beat that drum as loudly as possible, Sessions was at least unwise and sloppy in his blanket assertion about having zero communication with any Russian governmental figures. He should have been much more careful about answering that question as categorically as he did. But it's also reasonable to presume that given Franken's line of questioning, and the entire lead-up to the question, Sessions very well may have been answering within the confines of the campaign context.  That's not a big logical leap.  And it's a far cry from deliberate perjury. The Washington Post's Philip Bump has assembled a useful timeline on this kerfuffle, concluding (as I have) that based on current information, Democrats are overreaching:

Put together a timeline on what Sessions did and said, and am now thinking that Dems are overplaying their hand. https://t.co/qSyBftV9Lf

Perjury requires proof of willful intent, a standard that allowed Eric Holder to wriggle off the hook twice after sworn statements about various Obama-era scandals were shown to be inaccurate.  One such episode was, to my eyes, a much clearer-cut instance of lying than anything we've seen from Sessions.  Absent more proof that the public hasn't seen, it seems to be that there is more than enough ambiguity here for Sessions to avoid charges. To accuse him of deliberately lying under oath is a stretch, so Americans are right to view the partisan resignation chorus through a cynical lens. Nevertheless, Sessions' over-broad response does feed the Trump/Russia controversy in an unhelpful way for the White House. The FBI and Justice Department are investigating Russia's efforts at electoral meddling, and if Sessions even appears to be compromised on his impartiality -- and particularly if he's been even a tangential subject of the probe -- it looks terrible for him to continue overseeing the investigation in any way.

Loretta Lynch was forced to quasi-recuse herself on the Hillary Clinton email matter after her infamous and egregiously foolish private meeting with Bill Clinton on a private jet was revealed. Even if they never mentioned that topic once (color me skeptical), it looked awful, so she was compelled to cut herself out of the decision-making loop on that case (although her political meddling continued). Even if you're more trusting of Sessions than Lynch, the optics still look bad. For him to continue presiding over that fact-finding exercise would taint the credibility of its eventual findings in many Americans' minds. Because of the apparent (if understandable or defensible) disconnect between his answer to Franken and the newly-revealed record, a recusal is appropriate. We discussed these issues on Outnumbered this afternoon: