WH on ISIS Fight: 'In Some Ways, This is Just a War of Narratives' 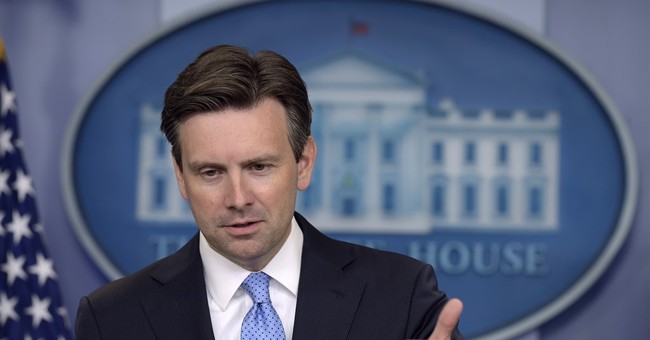 Well, it's also about sophisticated improvised bombs set by radicalized Islamists in the streets of New York and New Jersey, but it's good to see that Team Obama has its eye on the ball.  We'll get to Josh Earnest's tone deaf 'narratives' claptrap in a bit, but let's begin with an overview of how Team Smart Power is performing on the world stage, and how their priorities are playing out.  With the nation on edge after a string of successful and attempted low-level terrorist attacks -- which some of our leaders are extremely reluctant to identify as such -- a story from Politico seems especially notable this morning.   Over the last year, the Obama administration struck a deal with Iran's regime, which Obama's own State Department continues to assess as the world's top state sponsor of terrorism. Tehran is receiving hundreds of billions of dollars in sanctions relief, in exchange for partially and temporarily pausing its illicit nuclear program. This influx of money comes despite Obama chastising Iran for breaching "the spirit" of the agreement, and despite the president admitting that some of the money could be used to finance terror (and may already have). In recent weeks, critics have also blasted the administration for paying a massive cash ransom for US hostages imprisoned by Iran. The White House adamantly denied that it was a ransom payment, but the evidence proved that it was. Responding to critiques about his practice of shipping enormous sums of hard currency to Tehran, Obama asserted that the US government's hands were tied on this matter. Our tough sanctions preclude us from wiring payments to the regime, he explained. That doesn't appear to be altogether true, however:

The United States made at least two separate payments to the Iranian government via wire transfer within the last 14 months, a Treasury Department spokesman confirmed Saturday, contradicting explanations from President Barack Obama that such payments were impossible. Responding to questions at an Aug. 4 press conference about a $400 million payment delivered in cash to the Iranian government, Obama said, “[T]he reason that we had to give them cash is precisely because we are so strict in maintaining sanctions and we do not have a banking relationship with Iran that we couldn't send them a check and we could not wire the money.” But a Treasury Department spokesman acknowledged on Saturday that on at least two occasions, the U.S. did make payments to the Iranian government via wire transfer. In July 2015, the same month in which the U.S., Iran and other countries announced a landmark nuclear agreement, the U.S. government paid the Islamic republic approximately $848,000. That payment settled a claim over architectural drawings and fossils that are now housed in the Tehran Museum of Contemporary Art and Iran’s Ministry of Environment, respectively. Then, in April 2016, the U.S. wired Iran approximately $9 million to remove 32 metric tons of its heavy water, which is used to produce plutonium and can aid in the making of nuclear weapons...The July 2015 wire transfer was made while the full weight of sanctions against Iran were intact, while the April 2016 payment for heavy water was made after the lifting of nuclear-related sanctions.

The Obama administration's lies and distortions on Iran keep piling up.  Elsewhere in 'Smart Power' news, still more Gitmo recidivists have returned to the jihad, and a nascent ceasefire in Syria touted by John Kerry last week seems to be on very shaky ground (see update II):

The GITMO news comes as House Democrats overwhelmingly opposed a bill to halt additional transfers of detainees, which Obama has threatened to veto.  And the Syria breakdown arrives on the heels of even more chemical weapons attacks from Assad's forces, making a total mockery out of Obama's endlessly-violated "red line" ultimatum, and once again confirming that Kerry's 2014 'diplomatic breakthrough' that allegedly forced Syria to relinquish all of its WMD's has totally and utterly failed.  Now, as ISIS claims responsibility for a mass stabbing at a Minnesota mall, and it appears likelier than ever that multiple crude bombs set in New York in New Jersey are the work of radical Islamist terrorists, authorities are anxious about whether this is all a rehearsal for something bigger (via Ed Morrissey):

“The crudity of the devices in all three cases certainly doesn’t point to any group that’s been developing (improvised explosive devices) for years,” said a U.S. official involved in the investigation who requested anonymity to discuss the inquiry. The official added that the crude nature of the devices and the apparent low level of planning had some investigators concerned that the blasts were just a test of New York’s security. “That’s what worries us: Was this some kind of test run, not just of the devices, but also of the surveillance in New York and the response?” the official said.

Never fear, America. The Obama White House is taking a breather from lying about its enormous cash and wire payments to the world's top sponsor of Islamist terrorism to reassure citizens that it is taking this war very seriously.  This war of "narratives," that is:

Josh Earnest just now on MSNBC, about ISIS's war on the West: "In some ways this is just a war of narratives." I don't know where to begin.

Here's the video, lest you think Pollack must be exaggerating. Perhaps another (depressingly ineffective) hashtag campaign can handle the narrative part of the war, but I'd imagine average Americans are more interested in hearing about active terror cells operating inside our country.  And how does this factor into "The Narrative"?

We are so f'd. This is from @michaeldweiss's appearance on CNN tonight: pic.twitter.com/n1KMUftMLh

UPDATE: Narrative has been shot and taken into custody: