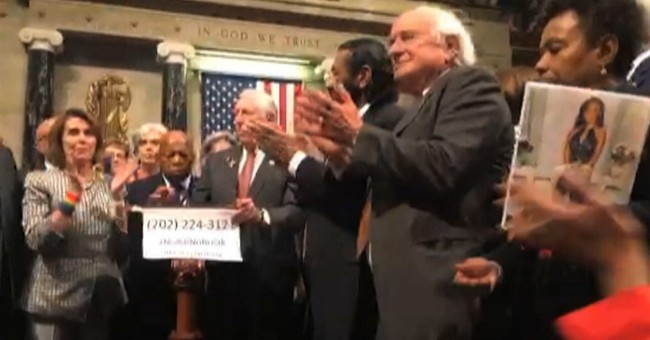 As Matt covered earlier, House Democrats abruptly 'abandoned the victims of gun violence' this afternoon, canceling their courageous anti-civil rights "sit-in" after one grueling night of air conditioning, catered meals, sleeping cots, cross-legged sitting, sloganeering, and placard-waving -- all under the vigilant protection of heavily-armed security, of course. "No bill, no break," they chanted in full throat, with Nancy Pelosi vowing to keep the vigil alive "until hell freezes over."  Mere hours later, they took that very break without compelling a single vote. In all fairness, there were flights home to be caught, and dinner reservations to fulfill.  No bill!  Let's break!  Also, please give us money.  Such commitment.  Such courage.  Since this was all about political posturing, I still maintain that House Republicans should have arrived to work this morning with one item on their agenda: Giving the Democrats an opportunity to vote on two consensus gun reform bills that their Senate colleagues filibustered earlier in the week.  If Pelosi's crew had backed the GOP-sponsored legislation, they'd have helped corner Reid's caucus, whose obstructionism would look even more cynical than before.  But if after shrieking for action, they immediately lined up to oppose limited measures that at least partially advanced their supposed goals, they'd look phonier than ever.  Better to just raise a self-righteous stink, bathe in glowing media coverage ("historic!"), vacuum up some fundraising bucks, then call it a day. Literally. One day.

GOP leadership ultimately opted to deny Democrats even the appearance of a victory, deploying Speaker Paul Ryan to resume the House's scheduled business in the middle of the night.  The fundraising, anti-due process demagogues were not rewarded for their histrionics.  Ryan arrived amid shouts and disorder, gaveled the chamber back into official session, and sought to press forward with legislation to combat the Zika virus.  Here's video of a rules-following adult killing the buzz at perhaps the lamest, most self-serving slumber party in human history:

Cortney noted earlier that Ryan correctly condemned Democrats' performance as a "PR stunt" at a press conference today, shaming his colleagues with screen shots of their naked fundraising appeals. Here is his entire statement, which exposed the minority's unvarnished politicking and emphasized the importance of respecting institutional rules to which both parties have agreed:

He also explained how Democrats had tried and failed to get their way via established channels, which is how a representative republic operates:

Why do I call this a stunt? Well, because it is one... Let’s just be honest here. Here are some facts: Yesterday, the House Appropriations Committee considered its bill for Homeland Security spending. At the committee, Democrats offered in committee an amendment offering the gun measure they say they wanted. That amendment failed on a bipartisan basis. So just yesterday, the Democrats offered this gun measure they claim they want, and it failed on a bipartisan basis in committee. There was a vote, it was in the committee, through regular order, and the vote failed. That’s a fact they didn’t want to talk about. Here’s another one: if Democrats want a vote for a bill on the floor, there is a way to get one. It just takes 218 signatures on a petition, and they can have a vote. It is that simple. That’s how the House works—it’s a well-known process. But they’re not doing that. They are not trying to actually get this done through regular order.

No, instead they’re staging protests. They’re trying to get on TV. They are sending out fundraising solicitations, like this one: Your contribution will go to the DCCC. Fifteen dollars. This one says, try giving us $25. But if you want, you can send us $50, $100, $250, $500, $1000. Because look at what we’re doing on the House floor. Send us money. If this is not a political stunt, then why are they trying to raise money off of this—off of a tragedy? What they’re calling for failed in a committee in the House. The reason I call this a stunt is because they know this isn’t going anywhere. It already failed in the Senate. They may not like this fact, but this bill couldn’t even get 50 votes in the United States Senate, let alone 60. Why is that? Why is it that this bill failed on a bipartisan basis in committee and this bill failed on a bipartisan basis in the Senate? Because in this country we do not take away people’s constitutional rights without due process. This is not just Republicans saying this. It’s groups like the ACLU who are saying this.

That last point is accurate and important.  Ryan added, "our focus needs to be on confronting radical extremism. Terrorism is the issue. Let me say it again—terrorism is the issue. And defeating terrorism is our focus here in the House." Amen to that.  Parting thought: Might Democrats hold a round-the-clock vigil outside the White House until President Obama presents a coherent plan to defeat ISIS -- you know, the terror army that inspired that jihadist to slaughter 49 Americans at an Orlando gay night club this month?  Or will there be planes to make, and "sexier" topics with which to whip up the base into a wallet-opening frenzy?