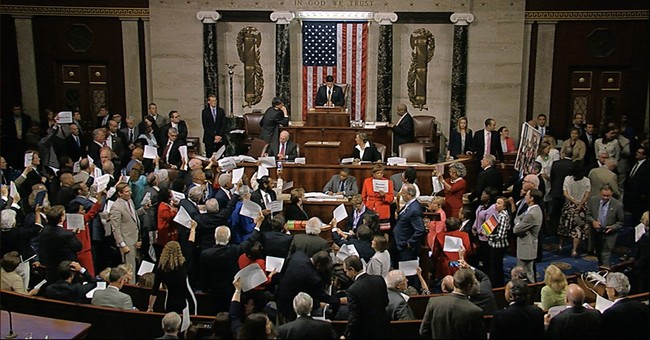 House Democrats have sent thrills up the legs of media figures and many left-wing activists with their "sit-in" protest stunt, the ostensible purpose of which is to force gun control votes in response to the Orlando terrorist attack. Their aim is to restrict both the second and fifth amendment rights of a group of US citizens that happens to be disproportionally Muslim. At the core of the current debate is how secret government watch lists -- which have wrongfully ensnared innocent Americans, including several Congressional Democrats -- can be used to prevent would-be terrorists from obtaining firearms. The vast majority of people on these lists are already barred from buying guns, "and the terrorist watch list already gets pinged when an individual applies for a background check for a firearm purchase. Matches are passed to the FBI’s Counterterrorism Division, which may then investigate and block the purchase if it is illegal."  As we noted earlier in the week, Senate Democrats failed to win simple majorities, let alone filibuster-proof majorities, for their preferred, sweeping legislation -- which would have done nothing to prevent the Pulse nightclub jihadist atrocity (as I write this, a potential mass shooting appears to be unfolding in Germany, where gun laws are extremely restrictive).

Having fallen well short of achieving their agenda, Harry Reid's caucus proceeded to filibuster two majority-supported compromise bills offered by Republicans, which would have further tied a terror watch list to the gun-buying process, and strengthened the existing federal background check system.  These common sense reforms were more incremental and more protective of Americans' constitutional rights than reactionary Democrats would have liked, but they represented incremental bipartisan progress.  Democrats balked in near-lockstep, killing both measures, before ranting furiously about "inaction" and shamefully accusing Republicans of wanting to arm ISIS.  Lower chamber Democrats have now gotten in on the act, engaging in self-congratulatory preening (they're fundraising off of the situation, naturally), agitating for votes on gun control bills. My free advice to Republican leadership:

Dare Democrats vote en masse against bills that make it harder for potential terrorists to buy guns, and improve federal background checks. Since they're demanding action (do something!), give them some action -- and force them to decide whether they'll waltz into the very cynical trap they thought they'd laid for the GOP. On some level, the Left has already won this public relations battle because basically all we're all talking about gun legislation. The Islamist killer in Orlando passed a background check and used a legally-purchased gun. The San Bernardino killers used legally-purchased but illegally-transdered guns, in addition to building explosives. The Islamist killers in Paris used illegal guns. The Islamist killers in Boston used improvised bombs. The Islamist killers in London and Madrid used more sophisticated bombs. The Islamist killers on 9/11 used box cutters and commercial jets. I could go on (and on, and on), but you get the drift. By training the political class' attention on gun control, the Obama administration's allies are helping to avoid serious discussion of more relevant concerns -- which happen to expose massive government failures in the face of a lethal threat to the American people. Here are three examples that have arisen since Orlando. Exhibit A:

"I'm not aware of any overall grand strategy at this point"
Gen Waldhauser, Today

The Commander-in-Chief admitted he didn't have a strategy to defeat the terrorist army his politically-motivated policies helped create, and intelligence about which his White House ignored and manipulated while dismissing ISIS as "jayvee" amateurs who'd been "contained." Roughly two years later, America's new top general in Africa testified before Congress that a comprehensive strategy for the group's destruction still doesn't exist, which "makes no sense." But guns.  Exhibit B:

ISIS can draw on a "large cadre of Western fighters" that could attack in the U.S. and the terror threat posed by the group remains as dangerous as ever despite efforts to crush it militarily, the director of the CIA said Thursday. "Unfortunately, despite all our progress against ISIL on the battlefield and in the financial realm, our efforts have not reduced the group's terrorism capability and global reach," CIA Director John Brennan testified to Congress using another acronym for the group.

Attorney General Loretta Lynch admitted today that the FBI is unaware of the whereabouts of Omar Mateen’s wife, Noor Salman. Salman has indicated she suspected Mateen was about to commit a terrorist attack, and even accompanied him to buy the weaponry he used to carry out the massacre. She insists, however, that as he left she tried to hold onto his arm so he wouldn’t leave. If the FBI believes she was aware of the impending attack, she could be prosecuted. “Has the shooter’s wife left the state of Florida?” a reporter asked Lynch during her press conference Tuesday. “Right now, I don’t know exactly the answer to that,” Lynch candidly replied. ”I believe she was going to travel but I do not know exactly her location now.”

Unreal. While the feds were busy redacting references to Islam and ISIS from phone transcripts that prove Omar Mateen's motivation for the slaughter -- and while the nation's top law enforcement official was suggesting we may never fully understand what motivated the "I'm doing this for ISIS" terrorist, while waxing poetic about "compassion, unity and love" -- the killer's accomplice vanished from under their noses.  But guns.