The Orlando Horror and Hard Truths 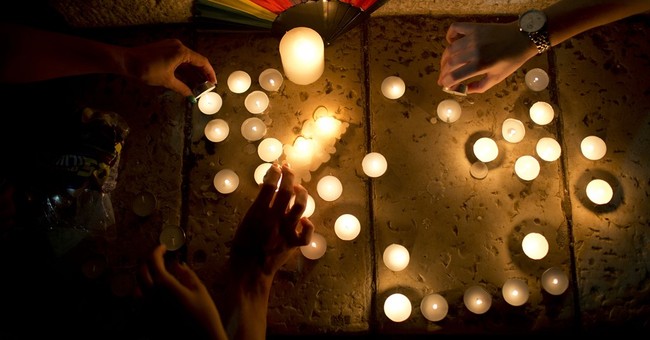 The Orlando massacre is sickening and frightening.  It's sickening on its face: Dozens of innocent people were shot to death by a remorseless, merciless fanatic on Saturday night, executed for the 'crime' of carousing with friends at an establishment that caters to a clientele despised by their killer.  It's frightening because this horror was not perpetrated by masked men shouting slogans in an unfamiliar tongue thousands of miles away. It wasn't carried out by trained practitioners of terror who hijacked airplanes and targeted symbolic nuclei of American power and wealth. No, like last year's San Bernardino bloodbath, this atrocity unfolded in a mid-sized American city, at the hands of a young U.S.-born American citizen. Fact will be separated from fiction in the days to come, as details are clarified and leads chased down. What seems to be clear at this stage is that Saturday's agent of destruction was a radical Islamist, inspired by ISIS and exhorted to action by instructions to murder and maim as many 'infidels' as possible, particularly during Islam's holy month of Ramadan.

In an utterly depressing storm of reactionary blame-casting, self-affirmation and point-scoring, far too many American partisans reacted by turning their grief and fury on one another.  Some on the Left immediately applied their prefab gun control template to this act of savagery. The NRA was relentlessly scapegoated, and appalling equivalencies were drawn; one Democratic Senator even called the US Congress "complicit" in the barbarity because it hadn't passed the sorts of laws he favored. Never mind that the attacker was a US citizen who purchased his firearms legally after passing a background check (despite this, this, and this). Never mind that he also reportedly had an (obviously illegal) explosive device in his possession, and conducted his rampage in a "gun-free zone." Never mind that the understandable impulse to do something in the face of such unimaginable carnage leads some to a "solution" that would disarm law-abiding innocents, rendering them even more defenseless against maniacs who manifestly have no interest in respecting any laws or regulations. Tight Massachusetts gun control measures did not prevent the Boston bombing, which relied on pressure cookers packed with ball-bearings to destroy and kill. Strict California laws did not stop the San Bernardino shooters from obtaining high-powered weapons or constructing a makeshift bomb.  Those are hard truths, but they're truths nonetheless. Neither the sitting president nor the Democratic nominee to succeed him could bring themselves to call radical Islamist terror by its name -- even after the connection was quite clear -- in their initial statements on Sunday, yet both managed to invoke gun control slogans.

Meanwhile, some on the Right seized on the Orlando outrage to claim validation for their over-broad views about Islam, to pillory political opponents, and to assert vindication for a proposed temporary ban on Muslim immigrants favored by the GOP presidential nominee -- who surreally congratulated himself for 'being right' about the problem at hand, even as the dead and wounded were still being identified.  Never mind that such a restriction would have done nothing to stop this individual, who was born in the USA and raised here for nearly three decades.  Never mind that erecting a religious test for entry into the United States would be logistically shambolic, would risk needlessly alienating and hamstringing key Muslim allies whose help is essential in excising the Islamist cancer, and would arguably be flagrantly unconstitutional, depending on how it was applied.  These are additional hard truths.  Let's face it: A tidy, ideologically-pure 'fix' to this threat does not exist.  We live in a country in which guns are -- and will remain -- readily available as a constitutional right, and in which armed law enforcement cannot be everywhere at all times.  By their very nature, free and open societies offer an endless supply of so-called "soft targets" that evil people can exploit if they choose to do so.  And they are choosing to do so, even those who live in our midst and work alongside us for years.  We shouldn't shy away from thoughtful debate over whether there are better ways to keep firearms away from dangerous people, nor should we avert our eyes from the very real cultural beliefs and attitudes that infect a far broader swath of Islam than many would prefer to believe.  But neither railing against the gun lobby nor mindlessly castigating the whole of Islam accomplishes anything productive, even if these intellectual pacifiers offer some fleeting sense of catharsis or comfort.

Horrific events like the Pulse bloodletting inevitably lead to a burst of thumb-sucking think pieces and news commentaries exploring "why they hate us."  Some are reflexively inclined to cast about for "legitimate grievances," often related to Western political policies, that are occasionally cited by various terrorist groups to justify their slaughter.  Which brings us to a final hard truth: What they loathe, and seek to annihilate through violence and fear, are our core values and our way of life.  Radical Islamists shot up Charlie Hebdo because of its editorial refusal to spare the Prophet Muhammad from its trademark irreverent and even blasphemous satire.  This was a literal, frontal attack on free speech.  Radical Islamists rampaged through Paris, indiscriminately butchering diners and concert-goers as vengeance for Western 'decadence' and 'obscenity.'  They laid siege to a Jewish grocery because they hate Jews, period. This was a literal, frontal attack on Western openness and small-L liberalism.  And now a radical Islamist has snatched away the lives of dozens of gay revelers simply because they are gay.  This is a literal, frontal attack on our pluralism and tolerance.  Introspection and the serious study of "root causes" can be worthwhile, but sometimes these pursuits can descend into dangerous, truth-obscuring navel gazing.  Radical Islamism is a religion-based cancer with tens of millions of adherents and sympathizers who don't need any special, discrete reasons (take your pick: Guantanamo, drone strikes, support for Israel, etc.) to want us dead.  They hate us because of the totality of who we are and what we believe.

The difficult work of preventing future lethal strikes will be complex, uneven, and imperfect, but it at least demands the rejection of blinding self-delusion on the part of Western civilization.  So, America, in this highly-charged election year, here is what our values require of us.  They require conservative Christians to set aside longstanding and deep-seated political differences and stand in unflinching support of the precious humanity of gay people, who were deliberately and specifically singled out in this radical Islamist attack.  And they require liberal gay rights advocates, feminists, and their ideological allies to set aside their dogma of political correctness to condemn and fight -- free from hedging or hysterical equivalencies -- an implacable enemy, for whom the killing of LGBT individuals abroad and now here on our shores is a ghastly matter of course.  Confronted with this bloodthirsty evil, lovers of the freedom and security we cherish in America can and must make common cause.  We'll either join together to mount a staunch defense of the shared values that are under assault by radical Islamism, or we'll tear each other apart with petty, stupid recriminations.  This ongoing process will never be easy, and serious disagreements and thorny gray areas will undoubtedly arise along the way.  Let's grapple with them together, and strive to make the right choices -- while never losing sight of a mutual enemy whose monstrous inhumanity and fetishism of death must always unite us in our humanity and love of life.