Polls: Trump Down 11 to Hillary Nationally, Trails Millennials by 36, Losing in Arizona 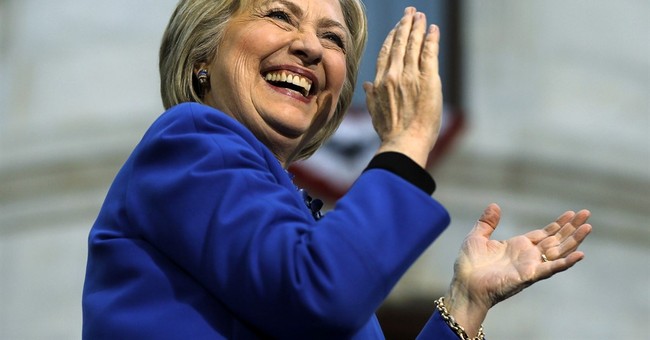 Trump followers have an extra spring in their step this morning, following their candidate's expected sweeping victories in five northeastern blue states last night. They're also crowing over a new poll from NBC (a polling source they typically dismiss as "biased" because of results like this) showing the boastful billionaire hitting 50 percent support nationally among the GOP electorate. Trump has been in that neighborhood in previous surveys, yet has underperformed those numbers in actual popular vote tallies. And they're quick to cite an outlier national poll from George Washington University showing Trump only losing to Hillary Clinton by three points, despite pulling in a dreadful 65 percent unfavorable rating -- by far the worst in either party's field. A few reality checks are in order for Republican voters in places like, say, Indiana, who may be tempted to succumb to the "unstoppable Trump" narrative his campaign and some in the media are pushing:

(1) Heading into last night, Trump had a heavy lift ahead of him. He needed to win 63 percent of the remaining bound delegates to secure a majority and stave off a contested convention. He's certainly been boosted by his fresh quintet of victories in states he wouldn't win as the Republican nominee -- and yes, I include Pennsylvania in that list. The Keystone State is unwinnable for Trump if the latest (NBC-affiliated!) poll is more or less accurate. But Hoosier State voters could put a serious dent in his math by handing Cruz an upset win next Tuesday.

(2) If the GWU poll is an outlier, the latest USA Today/Suffolk survey is much more aligned with recent trends. Its data shows Trump trailing Hillary Clinton head-to-head by 11 points, relying on an entirely reasonable (D+5) partisan sample. On the Republican side, a 40 percent plurality says they'll blame a rigged or unfair system if their preferred candidate fails to win the nomination, an indication of how poisonous this cycle has been. Interestingly, in the event that nobody secures the 1,237 delegate majority, only a 47 percent plurality believes the party must nominate the candidate with the most delegates heading into the convention. Forty-one percent say it should be "left up to the delegates" if that scenario comes to pass. One point of agreement: Fewer than one in five Republican-leaning respondent is open to the idea of a nominee who didn't at least run for the presidency this cycle.

(3) Donald Trump loves to tell his supporters that he'll 'expand the map' in the fall, picking off a string of deep blue states to defeat Hillary Clinton. This is fantasy. He has displayed the capacity to expand the map, but for the wrong party. Polls show him vulnerable against Hillary Clinton in the Republican strongholds of Utah and Mississippi, and now an Arizona survey has him trailing Clinton by eight points. That state has voted Democratic in a presidential year exactly once since 1950, even resisting Barack Obama's 2008 siren song that won over Indiana and North Carolina voters that cycle. The same poll shows Ted Cruz ahead by five points, and John Kasich up a dozen on the presumptive Democratic nominee. Trump claims he'll win states the GOP hasn't won in years. The data suggests that he'd actually force Republicans to play defense in a number of previously "safe" red states.

(4) One of the reasons Trump is so toxic in a general election setting is that his standing among ascendant voting demographics is horrific. His numbers with women, non-white voters and young people are so terrible that it's highly unlikely that those much-discussed "missing white voters" could come close to saving him. Here's another data point to plug into that equation:


Trump will not only get trounced with Millennials -- who now outnumber all other age groups as a voting bloc -- he threatens to cripple the Republican brand with these voters, beyond the beating it has already sustained. The only sliver of hope in all of this is that Hillary Clinton is quite unpopular herself, and she's really, really bad at being a candidate:


That'll be welcome news to the 65-to-69 percent of Americans who already hold a negative view of the man, including 70-plus percent of women. Didn't we just hear that his boorishness was all an act? Hasn't Trump said he's capable of totally reinventing himself on a dime? Doesn't matter. They're making it up as they go along, as Democrats salivate over dismantling this flailing, undisciplined, terribly-organized mess of a campaign if the Republicans select this man as their standard-bearer. Choose wisely, Indiana.  I'll leave you with yet another data-based rebuttal to the discredited and misleading Trump 2016/Reagan 1980 polling comparisons, this one focusing on each man's favorability standing: Night and day.