RNC Chair: No, We Didn't 'Stack' the Debate Audience With Anti-Trump Donors 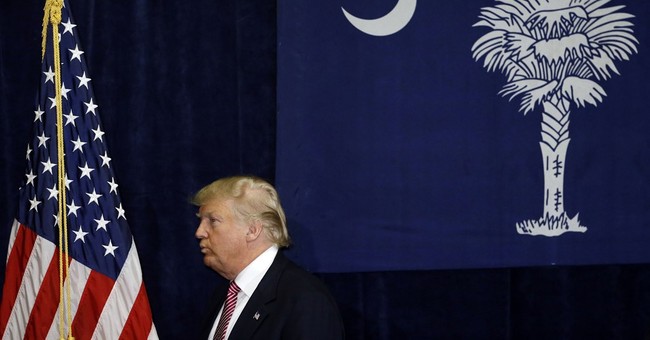 Donald Trump got booed -- a lot -- during last week's CBS News debate in South Carolina. Some of the heaviest boos rained down as he appropriated fringe-left talking points to accuse a former president who is beloved among Republicans of deliberately lying the nation into war, bearing responsibility for 9/11, and failing to kill Osama bin Laden when presented with the opportunity. All three of these charges are either grossly unfair or flat-out false. Trump also claimed that he alone had the foresight to staunchly oppose the Iraq War -- over which he called for President Bush to be impeached -- before it was waged. There is no evidence that this is true either, just as there's nothing that backs up Trump's dubious boast that the September 11, 2001 attacks wouldn't have happened on his watch. So as he grabbed the microphone and bellowed Code Pink slogans at others on the stage, his face flushed with anger, hundreds of South Carolina Republicans let him have it. This entirely predictable reaction, he now insists, must be proof of an anti-Trump RNC conspiracy over which he is once again threatening to jettison his Republican loyalty pledge.  Republican National Committee Chairman Reince Priebus appeared on Fox News last evening to address Trump's allegations:


"The RNC had a total of ten donors in the audience from our ticket allocation. Ten. So that's about half a percent of the entire audience."


Townhall has obtained a copy of a memorandum sent to RNC members yesterday, detailing how tickets were dispersed:


Trump fans will say that in addition to the hundreds of supporters of other candidates in the crowd, roughly 1,000 tickets were distributed to party officials at the national and state level, so that's how "the establishment" placed its finger on the scale. But the sort of party dignitaries and activists who are most likely to receive these tickets are almost certainly political veterans in the state -- not the disaffected, low-propensity voters who make up a significant portion of Trump's base. The point is that the audience's hostility toward Trump arose organically, based on the way these events are run. It was not premeditated or carried out as some orchestrated scheme.  According to public polling, roughly two-thirds of South Carolina Republican voters support someone other than Trump for the nomination, and President Bush has an 84 percent approval rating in the state. The disapprobation directed at Trump, therefore, isn't some sinister mystery; it's a natural product of political realities and Trump's conduct on stage.  I appeared on Lou Dobbs' show with the Trump campaign's national spokesperson this week and called the billionaire celebrity out for his incessant whining and conspiracy-mongering:


As I note in the clip, Trump's paranoid theories and provocative assertions are often untethered to empirical reality.  He was not robbed of a victory in Iowa.  He did not see thousands of New Jersey Muslims cheering in the streets on live television in the aftermath of 9/11.  He did, in fact, seek to build Casinos in Florida, and he did propose a massive tariff on the Chinese in an editorial board meeting -- both of which he angrily denied during debates.  By the way, his "new" conniption fit is a familiar one: If Ted Cruz doesn't stop "lying" about him, Trump says, he'll file a lawsuit over Cruz's eligibility to be president.  Cruz has encouraged Trump to go right ahead and waste his time and money on that frivolous endeavor. What's especially curious about Trump repeatedly returning to the "natural born citizen" well with Cruz (a tactic that failed in Iowa) is that if Trump genuinely believes that (a) Cruz isn't eligible (he's flip-flopped on this point, of course) and (b) he has standing to sue, why would be link his threats to ancillary day-to-day complaints?  You're constitutionally disqualified from being president, and I'm going to sue you over it...unless you stop saying these other, unrelated things that make me angry.  It's almost as if this is an empty threat being leveled by an unserious, unstable, capricious, intemperate man.

Parting thought: There's a reason why President Obama is singling Trump out for criticism: He's playing to both parties' bases.  It's calculated signaling.  On one hand, hardcore Democrats obviously loathe Trump for all sorts of reasons -- though they may appreciate his anti-Bush tirades, support for government healthcare, and kind words about Planned Parenthood.  On the other hand, Obama knows that by training his fire on Trump, he's poking at the hornet's nest of rage on the Right, elevating Trump in the process.  He is intentionally inflaming political tribalism in a way that will redound to Trump's benefit in the short term.  As I quipped on Twitter after Obama's Tuesday press conference, let's dispense with the fiction that this man doesn't know exactly what he's doing.  Democrats are licking their chops over the prospect of running against the cartoonish mogul in the fall.  Trump's  head-to-head polling against both Clinton and Sanders is the weakest of anyone on the GOP field (he's down 5 to Hillary and 10 to Bernie in the RCP average), and his standing is likely to deteriorate when the Democratic attack machine really goes to work against him.  And his fundamentals, especially on favorability, portend a November loss -- perhaps a cataclysmically lopsided one, at that.