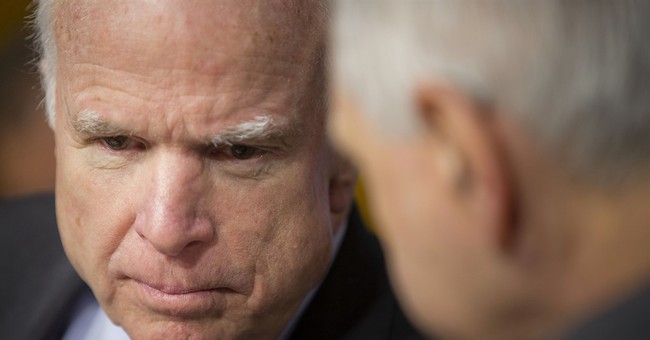 Like Trump, they're not saying he's ineligible, mind you -- they're just saying.  Rand Paul:

“You know, I think without question he is qualified and would make the cut to be prime minister of Canada, absolutely without question, he is qualified and he meets the qualifications,” the Kentucky senator said of Cruz on the radio show Kilmeade and Friends. In an interview with the Washington Post on Tuesday, Donald Trump said Ted Cruz’ Canadian birth would be a “big problem” for the Republican Party. Asked again if he thought Cruz was qualified to be president, Paul said he wasn’t “an expert” on what the Constitution says about natural-born citizens. “You know, I’m not an expert on the natural-born clause in the Constitution and people have various opinions,” said Paul. “Some people believe it means you need to be born here, some people think it means you can be born in another country as long as your parents are citizens.” “And we’ve had some previous cases of it, but I don’t think we’ve ever gone through the court system for the Supreme Court to decide one way or another,” he continued.


The Canadian Prime Minister line is obvious snark, but Paul's follow-up point is serious, and not entirely wrong: This issue hasn't been officially adjudicated by the Supreme Court.  But the law is quite clear, a point we'll revisit momentarily.  Why Paul decided to feed this narrative isn't exactly clear, but it's not the first time he's plunged a timely dagger into his fellow "wacko bird."  And who was it that coined that derogatory slur, again?  Oh, right:

“I don’t know the answer to that,” said McCain on the Chris Merrill Show on KFYI550 on Wednesday of Cruz’s eligibility. “I know it came up in my race because I was born in Panama, but I was born in the Canal Zone, which is a territory. Barry Goldwater was born in Arizona when it was a territory when he ran in 1964.”... “Yeah, [I was born on] a U.S. military base,” continued McCain about his own birth. “That’s different from being born on foreign soil, so I think there is a question. I am not a constitutional scholar on that, but I think it’s worth looking into. I don’t think it’s illegitimate to look into it.” “I would think so,” McCain added, when asked if Cruz should try to get ahead of eligibility issues, saying he got ahead of questions about his birth in the Canal Zone. “It may be, that may be the case,” McCain said of the Supreme Court deciding the meaning of being a “natural-born” citizen.


That would be the same John McCain who was the Republican Party's presidential nominee in 2008, and who was born outside of the United States, albeit to American parents on an American military base.  As Buzzfeed notes, both McCain and Paul (and Trump) have previously dismissed this question as a non-issue.  Which it is.  As we've said on several occasions, the simplest way to think about this is that there are two types of US citizens: Natural born citizens (citizens from birth), and naturalized citizens (who've undertaken a process to attain citizenship).  Cruz was never naturalized.  Ergo, by simple logic, the law, and process of elimination, he is a natural born citizen.  Former federal prosecutor Andy McCarthy (a Cruz supporter who also cites non-Cruz supporters) delves deeper into the law at National Review:

The Constitution’s invocation of “natural born citizen” incorporates this principle of citizenship derived from parentage. That this is the original meaning is obvious from the Naturalization Act of 1790. It was enacted by the first Congress, which included several of the framers, and signed into law by President George Washington, who had presided over the constitutional convention. The Act provided that children born outside the United States to American citizens were “natural born” U.S. citizens at birth, “Provided, That the right of citizenship shall not descend to persons whose fathers have never been resident in the United States.” As we shall see presently, Congress later changed the law, making it easier for one American-citizen parent to pass birthright citizenship to his or her child, regardless of whether the non-American parent ever resided in the United States. But even if the more demanding 1790 law had remained in effect, Cruz would still be a natural born citizen...Under the law in effect when Cruz was born in 1970 (i.e., statutes applying to people born between 1952 and 1986), the requirement was that, at the time of birth, the American citizen parent had to have resided in the U.S. for ten years, including five years after the age of fourteen. Cruz’s mother, Eleanor, easily met that requirement: she was in her mid-thirties when Ted was born and had spent most of her life in the U.S. [having been born in Delaware]...

If NH was between Trump, Rubio and Cruz, who would Republicans vote for? Per @PPPpolls: Trump 36% Rubio 34% Cruz 19%


Here we're seeing the reverse of 2012's dynamic, which redounded to Mitt Romney's advantage: The "establishment"/center-right logjam (Christie, Bush, Kasich) is helping Trump (and Cruz in other states) -- and is certainly impeding Marco Rubio, who represents something of a bridge between the two camps.