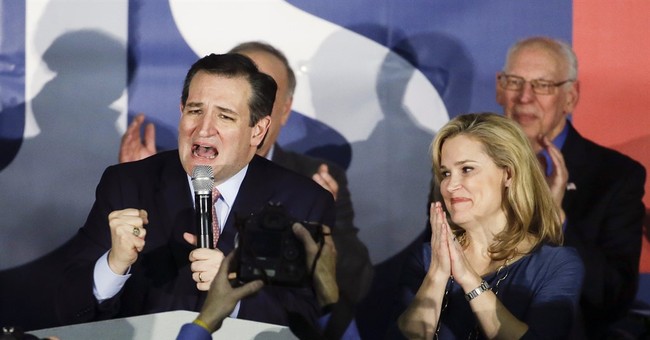 A few points on what we learned last night in the Hawkeye State, where Ted Cruz won eight nominating delegates, Donald Trump and Marco Rubio each pulled in seven, Ben Carson secured three, and Rand Paul and Jeb Bush each picked off a single delegate:

(1) Some laws of political gravity do apply to Donald Trump after all, even in the GOP primary. The billionaire counted on his flood-the-zone "earned media" strategy and large rallies to attract waves of new voters and get the job done for him; Ted Cruz relied on good old fashioned political elbow grease, setting up a superior ground operation. In the end, Cruz out-worked and out-organized Trump. A well-earned victory. Despite his loss, it's worth noting that Trump was uncharacteristically magnanimous and brief in his remarks, even if the speech was a bit...low-energy, by his standards.

(2) The polling was wrong. Again. This seems to be becoming a trend, both here in the US and around the world. Donald Trump was the frontrunner heading into caucus night, having led in 13 consecutive statewide polls. His average lead was nearly five points. He lost by four. Cruz over-performed his RCP average by four points, Trump under-performed by five, and Marco Rubio beat his polling average by seven percentage points. Trump has a much larger cushion in New Hampshire, but it'll be interesting to see how he responds to his "winner" narrative being punctured right out of the gate, and how New Hampshirites digest the Iowa results.  By the way, re-read this post from Monday afternoon and have a chuckle at my advice about which polls to ignore.  Oops.

(3) The conventional wisdom about turnout was also wrong. Virtually everyone agreed that the larger the turnout among GOP caucus-goers, the better news it was for Trump. The all-time record for Iowa Republicans was just shy of 122,000 last cycle.  2016's number? 182,000 -- totally shattering the previous high water mark, and surpassing the upper end of Team Cruz's projections and modeling. So turnout blew away expectations, yet Trump came perilously close to falling to third place. Remarkable. Entrance polling data suggests that Rubio benefited heavily from late deciders breaking his way, pulling his candidacy from a distant third to a near-tie for second place, firmly in the top echelon of candidates.  The GOP's enthusiasm advantage was real in Iowa, but many of the  lower-propensity voters who showed up did so to vote for someone other than Donald Trump.  In other words, we learned that Donald Trump's support is not a mirage, but at least in Iowa, it was significantly overstated in the public polls he so often loves to quote.

(4) It was a good night for conservatives.  Many of us who have been Trump detractors have argued that in addition to his shortcomings on temperament, judgment and policy knowledge, Trump simply isn't a reliable conservative.  Iowa ended up being a three-man race, with Cruz, Rubio and Trump accounting for fully 75 percent of Republican caucus-goers.  Nine other candidates divided up the remaining quarter of the pie.  Within the three-candidate dynamic, the two conservatives -- Cruz and Rubio -- accounted for 51 percent of the vote, more than doubling Trump's 24 percent.  The big questions now become whether New Hampshire confirms or upends the "it's down to three guys" narrative, and how quickly the still-crowded (even post-Huckabee) field winnows.

(5) Monday's results were outstanding for Cruz, very good for Rubio, and a mixed bag for Trump (let's face it: a second-place finish with a bare-bones campaign in a heavily evangelical state is still pretty impressive for a guy like The Donald, in the scheme of things).  The outcome was a catastrophe for Jeb World.  The Bush campaign and its allies spent roughly $15 million in Iowa alone, significantly more than any other candidate's campaign and supporters, in either party.  Those millions were primarily directed toward boosting the former Florida governor and attacking Marco Rubio.  In the end, Jeb finished with a paltry three percent of the vote in Iowa, and Rubio surged in a major way.  A comprehensive failure.  And then there's this.  Oof:


New Hampshire is next, with a critical debate scheduled for Saturday night on ABC News, followed by the Tuesday primary.  Pull up a chair and get comfortable -- this nominating battle could just be getting started, with both the Rubio and Cruz campaigns signaling that they're equipped to stay in it for the long haul.  I'll leave you with the top three finishers' versions of victory speeches, all delivered while the Democratic nailbiter was too close to call:


UPDATE - My breakdown of Iowa, late last night with Megyn Kelly -- speaking of whom, it looks like Trump's decision to boycott Fox's debate backfired. Via Right Sightings: