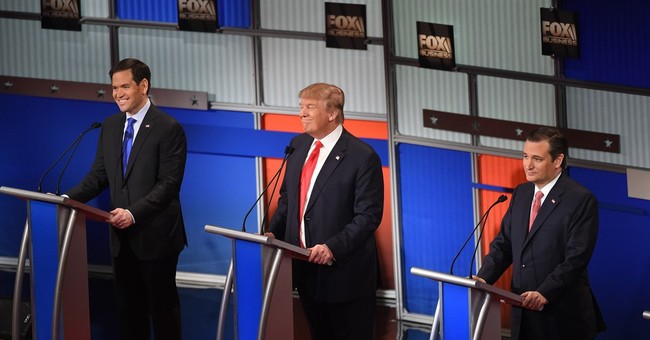 Read on, and we'll toss some very cold water on that headline. But first, two statewide Iowa surveys in the field since last Friday show the Republican race virtually deadlocked among Donald Trump, Ted Cruz and Marco Rubio. See for yourself:


You'll notice that the two most recent polls have Trump/Cruz/Rubio at (27/26/22) and (20/19/19), virtual ties at the top of the heap. But you'll also notice that two more respected and established pollsters churned out very different final results. Quinnipiac shows Trump leading Cruz by seven, with Rubio seven points behind Cruz. This is roughly similar to the Des Moines Register's last pre-caucus poll, which we covered in some detail over the weekend (it is genuinely extraordinary that a candidate this unpopular within his own party is leading the race).  If you're a Cruz or Rubio fan invested in the narrative that Trump's a paper tiger and that Iowa's a total jump ball, you'll cling to the Emerson and Opinion Savvy results as evidence of late-breaking momentum.  But don't get your hopes up.  Allahpundit:

Emerson has a C+ rating from FiveThirtyEight and their sample consists of just 298 likely Republican caucusgoers for a margin of error of 5.6 percent. (Which, technically, means Rubio might actually be leading.) Opinion Savvy, which Nate Silver says is essentially the same shop as Insider Advantage, has a D rating. If you’re making any bets, I’d stick with Selzer and Quinnipiac.


So would I, for what it's worth.  Of course, polling won't matter in a few hours -- which fixes our attention on the whole ballgame tonight: Turnout. Katie wrote about the record GOP turnout expected this evening, but just how big that record-breaking number ends up getting will likely be determinative. Allahpundit has a terrific post on this over at HotAir, which I encourage you to read in full. The bottom line is that Trump leads in the polls and stands to benefit the higher turnout gets, as huge numbers would point to lots of first-time caucusers, upon whom Trump is relying. But Team Cruz seems extremely confident in its hyper-sophisticated ground game, via National Review:

The Cruz campaign has done extensive modeling on the caucuses and believes the turnout will ultimately fall between 133,000 and 137,000. Republicans familiar with Cruz’s analytics program say his team has modeled caucus electorates all the way up to 175,000 out of an abundance of caution, and feels confident that its man will prevail even if turnout reaches that high. The reason: Cruz will hold a lead of roughly 7,000 votes over Trump with a GOP electorate of 125,000, his allies say. Trump would need to win a huge plurality — if not a majority — of additional votes in order to offset Cruz’s lead.


The Trump and Cruz camps both seem convinced that their guy will win Iowa tonight, while the Rubio folks are talking up their candidate's momentum.  Somebody's going to end up being disappointed when the votes are tabulated and announced in a matter of hours.  By the way, over on the Democratic side, Hillary Clinton's final RCP polling edge is four points, with six of the last eight Iowa surveys breaking in her direction.  Sanders is predicting a major upset, but the data suggests Clinton is poised to win.  By the way, guess who doesn't seem to be quite so sick and tired of hearing about those "damn emails" anymore?


It looks like the Vermont Socialist will have plenty of money to fight Hillary tooth and nail over the long haul.