Cruz: You Realize Democrats Are 'Very Eager' to Run Against Trump, Right? 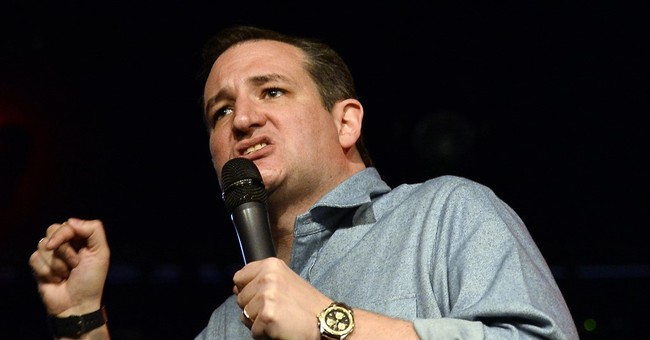 Of course they are. I've spoken to some of them. They're mostly keeping their powder dry for the moment, but they're so ecstatic over the Trump phenomenon that they're practically prepared to don "Make America Great Again!" hats throughout primary season.  For what it's worth, they also say they see Cruz as another easy demonization mark ("extreme" conservative, "Senator Shutdown," etc.), but they seem less smug about that assessment as Hillary stumbles and polls like this become the norm.  Why the Trump "enthusiasm" among professional Democrats? Because they know that a match-up against Trump would virtually guarantee that their team retains the White House, even with a wheezing corrupt liar as their standard-bearer. Trump's fundamentals are atrocious among the broader electorate; his loose canon schtick obviously doesn't wear well with most voters -- who'd be...highly susceptible to the tsunami of negativity Democrats' billion-dollar attack machine would unleash against him if he's nominated.  Trump is an opposition researcher's dream come true. The teflon effect goes down the tubes in a general election setting. The good news for the celebrity billionaire is that he enjoys universal name recognition. The bad news is that his political brand is horrifically bad, especially among moderate, female, young, and Hispanic voters, among whom Republicans must improve in order to win. Plus, one can't help but wonder if some Democrats may privately be pondering whether Trump will resort back to embracing the liberalism he's espoused for most of his adult life just as soon as leading certain voters around by the nose is no longer in his immediate interests.  All of this is obvious to conservatives who've consistently opposed Trump's candidacy.  What's newsworthy is that Ted Cruz is now advancing this line of argument:

.@tedcruz also suggested Democrats are "very eager" to support Trump because they want to run against him in the general election.

What seems to have finally -- finally! -- forced the Cruz to abandon the "we're besties!" routine is Trump's relentless, intentional amplification of the birtherism narrative, the premise of which is that the Texas Senator is ineligible for the presidency because he was born in Canada.  For reasons that we have outlined over and over and over again, this is incorrect.  Based on a commonsense reading of the constitution (US citizens who've never been naturalized are by definition natural born) and explicit federal law, Cruz can be president.  This should be a non-issue, tortured re-definitions of what "naturalization" means notwithstanding.  Trump pretends he's merely asking questions for Cruz's own good, and says that he'd "hate" to see this become a problem for Cruz.  Hey, people are talking about it, Trump shrugs with a twinkle in his eye, before warning that the controversy could lead to lawsuits and uncertainty.  And by "people" he means "Donald Trump" --  in tweets, on television, and in speeches.  Behold, a charming vignette from a recent Trump rally in Nevada:

Ted Cruz has a real cloud hanging over his head," Trump said. "So the question is: Is Ted Cruz, is he a natural-born citizen?" The crowd again shouted, "No!" "I just heard this: He was a citizen of Canada for a long time," Trump said, referring to Cruz having citizenship in the United States and Canada until recently. "He was a citizen of the United States, I believe, and Canada simultaneously. How do you, how -- what's going on here? So, he's got to straighten these things out." Trump questioned why Cruz didn't revoke his Canadian citizenship years ago, especially when he became a U.S. senator. "Does he get a pass from that?" Trump asked. The crowd again answered, "No!"


But he'd surely hate for any of this to damage his dear, dear friend, you must understand.  Cruz is punching back harder than usual because there's some evidence that this story is hurting him, among his own voters, and among the Trump base he hopes to inherit if and when the real estate mogul fades. Today's new Des Moines Register poll indicates this is less of a potent issue than PPP does, but Cruz's standing has eroded by seven points since the last survey. Yesterday afternoon, Cruz lobbed initial salvos at Trump on this, including floating the idea that Democrats would love to face Trump in the general (message: he'll lose to Hillary), and hitting Trump for citing a liberal law professor to advance this storyline (message: Trump's a say-anything non-conservative).  Then there were the additional indications that a high-octane Trump/Cruz "cage match" the latter candidate has long attempted to avoid might be coming soon, via RealClearPolitics:

Although Ted Cruz has insisted he will not personally attack Donald Trump as the race for the Republican nomination heats up, supporters of the Texas senator appear to be weighing how best to target Trump in Iowa, where Cruz holds a narrow lead. A message-testing phone call in Iowa on Monday floated seven distinct lines of attack against the national frontrunner, asking whether each one would make the listener more or less likely to support him.


Among the criticisms tested were messages about Trump's past support for abortion and single-payer healthcare (which he still defends), as well as a line "[depicting] Trump as 'a New York liberal pretending to have conservative values.'" RCP couldn't confirm for sure that these calls were sponsored by Team Cruz, despite several context clues. Well, how's this for confirmation?

Welcome to the fight against Trump, Cruz supporters https://t.co/hnnqjwoO29


Oh, it's on. And Thursday's Fox Business Network debate in South Carolina could be rather memorable indeed.  I'll leave you with this Iowa anecdote that may warm the hearts of anti-Trump Republicans everywhere -- presented with the requisite caveat that rival campaigns underestimate The Donald at their peril:

At Trump event in Cedar Falls; Trump staffer asked crowd how many had definitely decided to caucus for Trump. Only about 5% of hands go up.

Sen Cruz on Trump and nuclear triad, 'Understand not just based on Sunday Shows' #glovesoff https://t.co/NqcOFNCCHe