Former ‘Non-Binary’ Woman Will Sue Medical Professionals Who Provided Her Irreversible ‘To...
Tipsheet

After lying mostly dormant for weeks amid intensive media focus on the Republican presidential race, Hillary Clinton's scandals have exploded back into the headlines over the past four days. On Friday, the  State Department released a 2011 email that appeared to show then-Secretary Clinton instructing a colleague to strip an identifying heading -- which includes classification notices -- off of a sensitive memo and send it "nonsecure." The episode may prove criminal mishandling of classified material, and at the very least underscores the Democratic frontrunner's reckless and cavalier approach to safeguarding national secrets. More than 1,300 emails that passed through Clinton's unsecure, improper private email server contained classified information, including top secret intelligence. With Clinton lamely and misleadingly defending herself on that front over the weekend, Fox News' Chief Intelligence Correspondent Catherine Herridge breaks this significant news today:

The FBI investigation into Hillary Clinton’s use of private email as secretary of state has expanded to look at whether the possible “intersection” of Clinton Foundation work and State Department business may have violated public corruption laws, three intelligence sources not authorized to speak on the record told Fox News. This track is in addition to the focus on classified material found on Clinton’s personal server. "The agents are investigating the possible intersection of Clinton Foundation donations, the dispensation of State Department contracts and whether regular processes were followed," one source said. The development follows press reports over the past year about the potential overlap of State Department and Clinton Foundation work, and questions over whether donors benefited from their contacts inside the administration.


Three separate sources, who point to several indications of major escalation -- including the overlapping of two high-profile Clinton controversies:

Inside the FBI, pressure is growing to pursue the case. One intelligence source told Fox News that FBI agents would be “screaming” if a prosecution is not pursued because “many previous public corruption cases have been made and successfully prosecuted with much less evidence than what is emerging in this investigation.” The FBI is particularly on edge in the wake of how the case of former CIA Director David Petraeus was handled...In the Petraeus case, the exposure of classified information was assessed to be limited......It is unclear which of the two lines of inquiry was opened first by the FBI and whether they eventually will be combined and presented before a special grand jury. One intelligence source said the public corruption angle dates back to at least April 2015. Fox News is told that about 100 special agents assigned to the investigations also were asked to sign non-disclosure agreements, with as many as 50 additional agents on “temporary duty assignment,” or TDY. The request to sign a new NDA could reflect that agents are handling the highly classified material in the emails, or serve as a reminder not to leak about the case, or both...Separately, a former high-ranking State Department official emphasized to Fox News that Clinton’s deliberate non-use of her government email address may be increasingly “significant.” “It is virtually automatic when one comes on board at the State Department to be assigned an email address,” the source said.


Much to unpack.  At some point in the course of its probe, the FBI expanded its inquiry from simply examining possible large-scale and unlawful handling of classified material to also looking into a potential obstruction of justice element of Mrs. Clinton's dodgy arrangement.  Today's news suggests a third, very serious, prong to the investigation that may date back as far as last spring.  If Herridge's sources are correct, federal agents are also scrutinizing whether Clinton's work as America's top diplomat was unethically influenced by her personal and financial interests vis-a-vis the Clinton Foundation -- which charity watchdogs and former employees have described as a "slush fund," and something quite different from a bona fide charitable organization.  Various deep dives into the Clinton Foundation's books and history have turned up serious questions involving national security-compromising deals, pay-to-play access-peddling, cronyist favoritism, unseemly greed, undisclosed and unvetted foreign donations (in violation of signed transparency agreements), and egregiously inaccurate tax filings.

Which brings us to the final bolded portion of the excerpt above.  One of the questions voters may have asked themselves throughout this email imbroglio is why Mrs. Clinton would go through the trouble and expense of setting up a rules-violating private server on which she intended to conduct all of her official business.  Why not just use the secure State Department system, as required?  Hillary's explanation is that she did so for "convenience," a ludicrous assertion on its face.  Paying someone -- who has since pleaded the fifth, by the way -- to install and maintain an entire separate email scheme is the opposite of convenient.  Furthermore, her follow-up claim that the primary goal of the server was to allow her to only use a single mobile device has been completely shot to pieces.

Critics argue that Mrs. Clinton proactively sought to wield complete control over the contents of her emails in order to insulate herself politically and limit the probative potency of future investigations.  With absolute control over her discrete server, Hillary and her team could unilaterally pick and choose which messages ever saw the light of day.  They could also permanently delete anything they determined to be legally or politically problematic.  We already know that Hillary withheld or deleted a number of work-related emails, which she swore under penalty of perjury that she hadn't done.  What else did she and her henchmen attempt to wipe (" like, with a cloth?") from the record?  The FBI has reportedly managed to recover many of the files Team Clinton sought to destroy, which may help explain what prompted today's newly-revealed branch of the bureau's widening investigation.  As they sifted through tens of thousands of deleted emails, might the feds have uncovered additional evidence of Mrs. Clinton effectively selling access to the highest rung of US statecraft?  Phil Kerpen advances the argument that if the whole purpose of Hillary's email set-up was to enable other underhanded dealings without the risk of oversight, the entire shady enterprise represents a single scandal:

@NoahCRothman The email setup was done to conceal the foundation pay-for-play stuff. One scandal, not two.


The other attention-grabbing passage in Fox's exclusive report is the apparent confirmation that many agents and officials will be livid if the Obama Justice Department refuses to pursue an indictment in this case.  These sources say previous instances of official malfeasance have been successfully prosecuted with "much less evidence" than what has already been gathered in the Hillary probe.  If politics prevails, expect to see an avalanche of ugly leaks and recriminations from whistleblowers.  Which would Democrats prefer: An indicted nominee, or endless questions and accusations about banana republic-style political fixing, under which their nominee was spared an indictment for transparently partisan reasons? Unpleasant options, both. 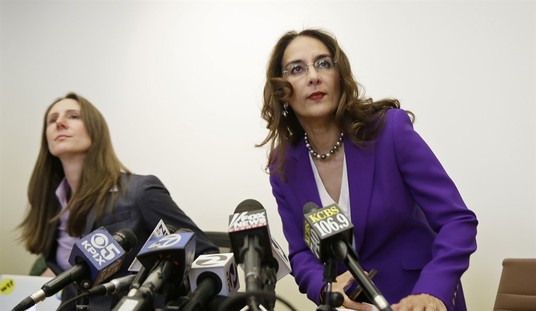