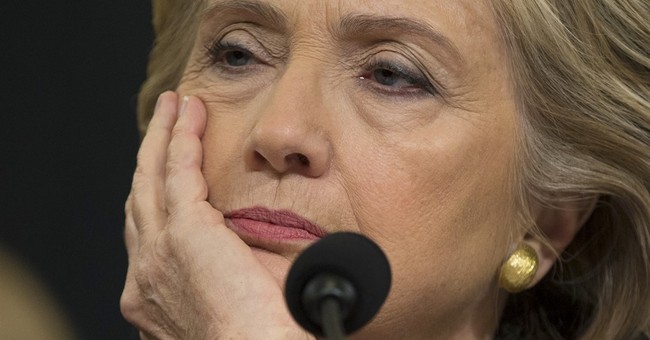 Poll: Sanders moves ahead of Clinton by 5 in Iowa https://t.co/HOIgKER9KD | AP photo pic.twitter.com/cYf4sQ1VTP


Those New Hampshire results aren't unusual; four polls taken in December and January have shown the Vermont Socialist leading Hillary by double digits in his neighboring state.  But Sanders' resurgence in Iowa is a bit more surprising.  A new ARG poll also gives Bernie the lead there, NBC/Marist has the race within the margin of error, and PPP measures major movement, too. The RCP average now has the two Democrats deadlocked in the Hawkeye State, with the scrappy underdog enjoying all of the momentum.  Here's Quinnipiac's trend line:


As Dan McLaughlin notes, even if this reversal of fortunes carries him to victory in one or both of the first two contests, Berniementum will undoubtedly slam into a brick wall in South Carolina.  Sanders' appeal is still relatively narrow, and Clinton enjoys much stronger fundraising, operational prowess and establishment support than he does.  Democratic Party elites -- who quite literally count more than average voters under their nominating rules -- have overwhelmingly cast in their lot with Hillary Clinton.  And the Clinton attack machine hasn't even begun to really hammer Bernie.  (She's already coming after him on his wildly unaffordable agenda, and here's a foretaste of how ugly things could get, if necessary). Plus, there's a strong case that the nominating calendar heavily favors Clinton in the crucial stretch from late February through much of March.  Barring an unforeseen implosion of epic proportions, Hillary Clinton will be her party's general election nominee -- even, I suspect, if she's indicted.  But her struggles among early state voters, who've seen the most of her in recent months, must be concerning to national Democrats.  She just isn't very good at this.  And Quinnipiac's Iowa numbers foreshadow fundamental general election vulnerabilities:


Democrats in this swing state view her much less favorably, as much less honest, and as far less empathetic and caring than her left-wing counterpart.  And the reason she's now trailing Sanders in the top line results can be boiled down to one phrase: Gender gap.  Yes, she commands a double-digit lead among women, but she trails Sanders by 31 points among Democratic men.  Hillary Clinton is simply a candidate who struggles mightily to win male voters, even within her own party at this stage; she'll count on overwhelming that disadvantage through an unprecedented galvanization of women in the general election.  Relying on that strategy may prove to be a risky proposition, depending on her opponent.  And one wonders how much the constant drip, drip, drip of scandal -- and the prospect of a possible criminal prosecution -- weighs on the minds of Democratic voters.  If we don't really like or trust her that much, how will other voters who are also less inclined to agree with her policies feel?  By the way, here's the Clinton camp's ridiculous response to yesterday's Fox scoop about the FBI's expanding probe:

Absolutely not true, Hillary Clinton says of Fox News report that FBI is investigating whether any public corruption laws were violated.

Hillary Clinton tells @DMRegister she has heard nothing from the FBI. "No, there’s nothing like that that is happening," she says.


Unless Hillary Clinton has perfect and omniscient knowledge of what federal investigators are up to -- which she doesn't and shouldn't -- this is a baseless denial.  Catherine Herridge has three sources who say the feds have roped public corruption allegations into their investigation.  Hillary cannot simply wish realities away through assertion. I'll leave you with my discussions of these developments on Fox News' On the Record and America's Newsroom (via Right Sightings):


In the first clip, Greta Van Susteren expresses puzzlement over Hillary's inadequate explanations of the email saga. Here's Mrs. Clinton's problem: She did try to explain why she broke the rules by setting up a private, unsecure email server through which she did all of her official business. But that story fell apart at the seams under modest scrutiny. She isn't offering reasonable, understandable justifications for her actions because there aren't any to offer.  She can't tell people the truth, which is that she wanted total control over her emails in order to protect her political aspirations, even at the expense of national security.  And that could well be criminal conduct.