By the Way, Bill and Hillary Have Banked More than $30 Million Since Last January 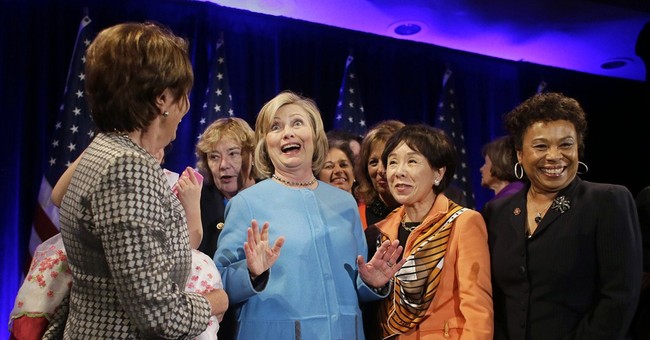 She's running for president as a "topple the rich" champion of "everyday Americans," and he's just tryin' to pay the bills, y'all:

Hillary Rodham Clinton and her husband made at least $30 million over the last 16 months, mainly from giving paid speeches to corporations, banks and other organizations, according to financial disclosure forms filed with federal elections officials on Friday. The sum, which makes Mrs. Clinton among the wealthiest of the 2016 presidential candidates, could create challenges for the former secretary of state as she tries to cast herself as a champion of everyday Americans in an era of income inequality. The $25 million in speaking fees since the beginning of last year continue a lucrative trend for the Clintons: They have now earned more than $125 million on the circuit since leaving the White House in 2001. In addition, the report shows, Mrs. Clinton reported income exceeding $5 million from her memoir of her time as secretary of state, “Hard Choices.” ...The report makes clear that Mrs. Clinton, since leaving the State Department, has joined the family speechmaking business with gusto. But the former president can still command higher fees than his wife, collecting about an average of about $250,000 per speech to $235,000 for Mrs. Clinton. And while Mr. Clinton’s largest honorarium was the $500,000 he collected from the EAT Stockholm Food Forum in Sweden, his wife’s engagements topped out at $350,000.


I would be remiss if I didn't highlight this little detail.  Nice work, if you can get it: "The former President was even paid $175,000 for a speech in Miami where he appeared via satellite."  Hillary also made six figures for addressing a gathering she didn't physically attend. Also, from the "dead broke" annals:

Bill Clinton was making about $24,000 a day in the first few months after leaving the WH. http://t.co/R6Yqw3WJZy pic.twitter.com/506YDnXitM


First of all, good for them.  To the extent that they've taken advantage of what the free market will fetch, their financial success ought to be greeted with applause by conservatives.  Capitalists have no quarrel with people making lots of money in exchange for in-demand goods and services.  On the other hand, to the extent that Bill and Hillary's financial fortune has been amassed via quid pro quo influence peddling, they should (at least) pay a heavy political price.  Is it a coincidence, for instance, that Bill's foreign speeches and paychecks appear to have spiked while his wife was running America's foreign policy?  Potential improprieties abound, involving both the Clintons personally, and their cash cow, not-quite-charity "slush fund."  Corruption is one caveat; hypocrisy is another.  Mrs. Clinton is parroting the resentment-based rhetoric of her party's most committed class warriors, droning on about income inequality and ostentatiously wringing her hands about CEO pay.  Here she is in Iowa last month:


"There's something wrong when CEOs make 300 times more than a typical worker."


As it turns out, the Clintons pulled in more income in 2014 than a number of Fortune 500 CEOs, people who run massive companies that employ thousands of people.  If you have a moment, take the "who made more money" Clinton/CEO quiz.