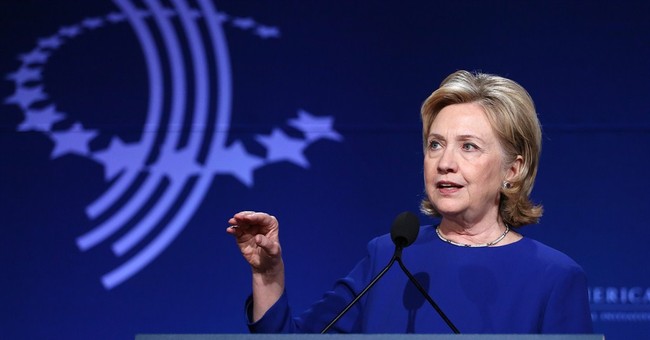 Hillary Clinton stepped in it when she said she was “dead broke” when she and her husband, President Bill Clinton, left the White House. As my colleague Guy Benson commented on Fox News earlier today, the Clintons are loaded.

Slick Willy made almost $105 million for 542 speeches between 2001-2013; his seven-day speaking tour to corporate executives across Europe in 2012 netted him a $1.4 million dollar payday alone. There’s nothing wrong with this, but, as Roger Simon of Politico noted, “you can’t both be wealthy and poor-mouth. Not if you want to be president.”

Time’s Joe Klein labeled the remarks as a “disaster” for Clinton since the media focus is now on their wealth, instead of the substance of her book, which probably isn’t a good pivot since the sales are dismal. Yet, this poor choice of words by Clinton should have conservatives feeling a bit more comfortable about her alleged 2016 candidacy; she’s human. And, she’s beatable. Obama knows this better than anyone.

If anything, this “inartful” comment puts the spotlight on one of Hillary’s weaknesses: she isn’t a good campaigner. Earlier this month, Tom Bevan of Real Clear Politics listed this as one of the reasons why Hillary won’t – or shouldn’t – run in 2016:

She's just not that good at campaigning. If the last two gaffe-prone weeks have reminded us of anything about Hillary, it’s that she’s a mediocre politician at best. Her shortcomings are significant: she can be stiff and wooden in public; she lacks the aura of a natural politician; she’s not a great public speaker, and she can come across as politically flat-footed and tone deaf -- as she did with her “dead broke” response to a rather benign question about relating to the financial challenges of the average voter. People still seem to believe that the Clinton name is synonymous with political skill, but that assumption is only half-true: If Hillary possessed even half of Bill’s political talent and acumen, she wouldn’t have lost to Barack Obama in 2008.

Hillary ran a dumb campaign in 2008 and might do so again. For a group of seasoned veterans, the 2008 Clinton campaign showed a stunning ignorance of how to win delegates in a Democratic contest. Rival Barack Obama exploited that weakness brilliantly. For example, Obama collected more net delegates by winning the Idaho caucuses, with 21,000 participants, than Clinton did by winning the New Jersey primary, with more than 1 million voters. Clinton just didn't pay attention to the smaller stuff, particularly the caucuses, and her cluelessness helped Obama win. It might help another rival in 2016.

Warren does align more with the Democratic base. Additionally, York noted, “Clinton has never really excited the most liberal wing of the Democratic Party. They see her as an overcautious centrist like her husband, and on top of that, many have never forgiven her for voting to authorize the war in Iraq.”

This could come back to haunt her as Iraq's national government finds itself fighting for its survival against advancing ISIS [Islamic State In Iraq and Syria] forces.

But, before she can spin that vote again, she’ll have to put this “dead broke” business to bed first.

Keli Goff at the Daily Beast aptly noted that this inability for Hillary to discuss her success in America is actually an important issue given that the GOP has mostly middle-class candidates populating their 2016 field:

Though in recent years the GOP nominees have been scions of privilege (think Bush, McCain and Romney) the current GOP lineup has more middle- and working-class bona fides. Chris Christie, Scott Walker, Bobby Jindal, Paul Ryan and Marco Rubio all come from backgrounds that make it likely they know how to operate a grocery store scanner. They also come from backgrounds in which the meaning of “dead broke” probably has a very different meaning for them than it appears to for the former secretary of state, especially since unlike her they are all still relying on government salaries.

Mitt Romney lost the last presidential election not because he was born to privilege, but because he didn’t know how to talk about his privilege. If Hillary has any hope of being a viable candidate against these men, then she should say what Romney never did: “I’ve been more fortunate than the average American.

So far, this supposed 2016 Clinton rollout has been lackluster at best; with her favorability rating dipping below 50 percent.