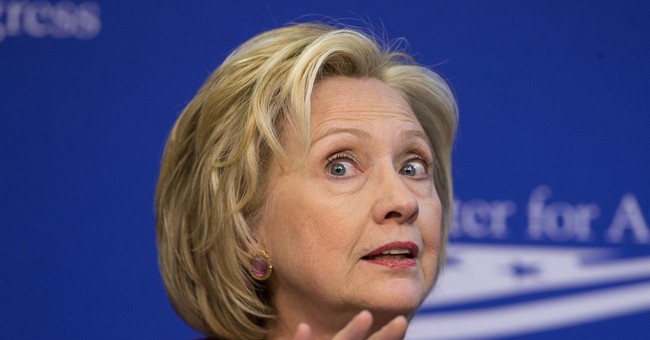 According to Vox's Jonathan Allen, formerly of Bloomberg, at least 181 Clinton Foundation donors lobbied the US State Department while Hillary Clinton was in charge, highlighting new questions over whether the Clintons profited from effectively renting out American foreign policy:

The size and scope of the symbiotic relationship between the Clintons and their donors is striking. At least 181 companies, individuals, and foreign governments that have given to the Clinton Foundation also lobbied the State Department when Hillary Clinton ran the place, according to a Vox analysis of foundation records and federal lobbying disclosures...This list of donors to the Clinton foundation who lobbied State matters because it gives a sense of just how common it was for influence-seekers to give to the Clinton Foundation, and exactly which ones did.


Bear in mind that this analysis only includes the disclosed donors.  The recently-revealed Russia/uranium deal involved undisclosed donations (part of a pattern, it turns out), in violation of a transparency agreement Hillary signed upon joining the State Department.  Team Clinton's excuse for failing to disclose the information has unraveled under cursory scrutiny. Clinton's defenders insist that nobody has offered concrete proof that this multi-million-dollar "slush fund" favor bank ever resulted in direct action by the State Department; at some point, though, enough smoke convinces people there's a fire.  And the smoke is billowing:

Former President Bill Clinton accepted more than $2.5 million in speaking fees from 13 major corporations and trade associations that lobbied the U.S. State Department while Hillary Clinton was secretary of state, an International Business Times investigation has found. The fees were paid directly to the former president, and not directed to his philanthropic foundation. Many of the companies that paid Bill Clinton for these speeches -- a roster of global giants that includes Microsoft, Oracle and Dell -- engaged him within the same three-month period in which they were also lobbying the State Department in pursuit of their policy aims, federal disclosure documents show. Several companies received millions of dollars in State Department contracts while Hillary Clinton led the institution. The disclosure that President Clinton received personal payments for speeches from the same corporate interests that were actively seeking to secure favorable policies from a federal department overseen by his wife underscores the vexing issue now confronting her presidential aspirations...When she became secretary of state in 2009, Hillary Clinton agreed to subject Bill Clinton’s speaking engagements to a conflict-of-interest review by an ethics counsel in Clinton’s State Department. Documents from Judicial Watch show the counsel’s office approving the bulk of the speaking engagements -- even those that came during or after periods when the firms paying Bill Clinton were filing disclosure forms notifying government regulators that they were lobbying the State Department. The revelation that the Clinton family accepted money from 13 firms actively working to influence the Clinton-run State Department follows IBTimes’ report on Monday showing that Goldman Sachs paid Bill Clinton $200,000 just before the banking giant began lobbying the State Department.


They made big payments to Bill within the same three-month window in which they were pressuring his wife's governmental entity "in pursuit of their policy aims." The Goldman Sachs story mentioned at the end of the excerpt is here. Which brings us to another whiff of impropriety, from thousands of miles away:

A politician from India donated some $5 million to the Clinton Foundation — which would have amounted to nearly his entire net worth, a new book about the Clintons claims. The Clinton Foundation in 2008 reported that it had received a contribution of between $1 million and $5 million from Amar Singh, a member of India’s Parliament and a pal of Bill Clinton. The size of the donation relative to Singh’s net worth raised questions about whether Singh was the true source of the cash, according to “Clinton Cash” author Peter Schweizer . The 2008 contribution was made as Congress debated approval of a nuclear agreement between the United States and India, which then-Sen. Hillary Rodham Clinton eventually supported.


While the mainstream media has by and large done a decent job of digging into this web of cash, many journalists and commentators have taken to fixating on the lack of "smoking gun" evidence of transactions that would amount to bribes (evidence potentially may have existed in Hillary's since-destroyed public/private emails).  MSNBC's Joe Scarborough finally had enough of it this morning, defending Clinton Cash author Peter Schweitzer and angrily noting a glaring double-standard at play -- via America Rising:

Part of the reason so many people feel compelled to defend the indefensible is that Hillary is essentially the only game in town for Democrats, a choice that the party has made for itself.  And America's "gliding queen" isn't in any rush to address any of these serious allegations -- or anything else for that matter:  Since announcing her presidential campaign 17 days ago, she has answered a total of seven questions from the media.  And most of her "answers" were either facile deflections or substance-free cliches.  Why subject yourself to real questions when you can stage phony "listening sessions" with hand-selected supporters stripped of their cellphones, and pander on Twitter:


Friendly reminder: Hillary Clinton was an opponent of same-sex marriage as a matter of "bedrock principle," before she was for states rights, before she was for a SCOTUS ruling establishing a Constitutional right to gay marriage.  That last evolution literally happened a few days ago, bit it doesn't matter.  Her rainbow Twitter avi is a symbolic expression of tribalism and an emblem of  "right thinking" that the media recover in lieu of relentlessly pounding away at her ethical breaches and ongoing refusal to answer questions...which is absolutely, positively how'd they be treating a similarly-situated Republican.  As I said at HotAir last evening, nod and glide, Your Majesty: