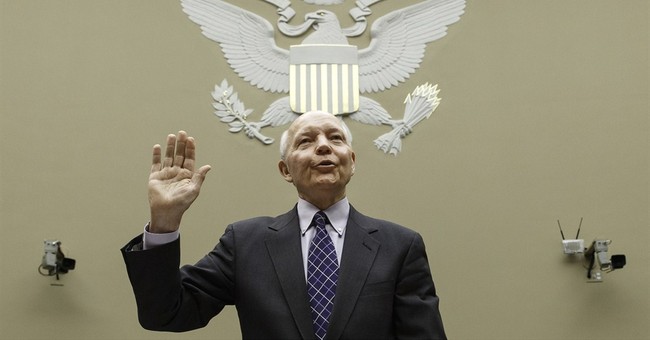 I had to watch this video twice to make sure I was understanding its implications correctly. Sure enough, here is everyone's favorite IRS Commissioner testifying on Capitol Hill (discussing subjects other than this scandal or this one) that under President Obama's unlawful executive amnesty, millions of illegal immigrants will be eligible to receive the generous Earned Income Tax Credit (EITC). This won't just be the case moving forward; the newly quasi-legalized-by-fiat immigrants also be able to claim retroactive refunds for up to three years -- even if they didn't file or pay taxes at the time. Astonishing:


The Washington Times summarizes the exchange:


Step one: Violate the laws and sovereignty of the United States of America by entering the country illegally.  Step two: Find work and get paid (often off the books).  Step three: Receive "deportation relief," a work permit and a Social Security Number, courtesy of the president's unilateral policy decree. Step four: Instantly become eligible for hefty future and back tax credits -- ie, checks cut directly to people with no tax liability, in many cases -- all courtesy of American taxpayers.  Even to a pro-DREAM Act, pro-reform squish like myself, this is completely indefensible. Our own Conn Carroll, it must be said, saw this coming a few months back.  He noted at the time that even though illegal immigrants already collect smaller tax credits ($4 billion from the Additional Child Tax Credit in 2011 alone), the EITC is a much bigger program involving a much deeper pot of money.  Some Republican Senators are blasting this scheme as tantamount to an "amnesty bonus," and if you believe Koskinen, the White House apparently didn't bother to ask how the president's power grab might open a fire-hose of new benefits for illegal immigrants via the tax code.  Think about that. Then again, they probably don't see it as a problem at all.  Remember, Obama's Attorney General nominee recently asserted that non-citizens have the "right" to work in the US.  The IRS can't say how much this little wrinkle will cost taxpayers, but Conn's back-of-the-envelope calculations suggest we could be looking at tens of billions in back payments over the past three years alone.  Meanwhile, Senate Democrats continue to obstruct any votes on the House-passed bill to fully fund the Department of Homeland Security, minus the small subset of appropriations to implement and carry out the president's unpopular, illegal (and evidently quite expensive) executive amnesty.  As a Twitter buddy put it, they're protesting 'shutting down' DHS while...objecting to funding DHS.  And they're hoping the media will give them an assist in pushing that preposterous narrative, which is entirely in service to the White House's politically-motivated arrogation of power via executive decree.  Incidentally, here's another amnesty-related concern raised in the Washington Times story:

Lawmakers also raised concerns Mr. Obama’s amnesty could open a window to illegal immigrants finding ways to vote, despite it being against the law. “While we may disagree about whether your deferred action programs were lawfully created and implemented, we are confident that we can all agree that these programs cannot be permitted to impair the integrity of our elections,” Republican members of Congress from Ohio wrote in a letter to Mr. Obama Wednesday, ahead of a hearing on the issue in the House on Thursday.


I'd like to see more details on the basis for this specific worry, but before Democrats laugh off questions regarding illegal voting by non-citizens as a paranoid Republican fairy tale, they should read this.  I'll leave you with a few questions: Since the media and Democrats seem so interested this week in Scott Walker's side-stepping of a silly question about his personal beliefs on evolution and faith, I'm sure they'll eagerly ask prominent Democrats about this actual, current policy controversy, right?  They'll be banging down the door of wherever Hillary is hiding these days to ask her about billions in tax credit pay-outs to illegal immigrants, right?  And while they're at it, maybe they can challenge her with some thorny "gotchas" about religion and science, since they apparently love those (although Democrats oddly tend get special exemptions from sneery "anti-science" fingerpointing). To start, does Hillary think all of these people are ignorant?

Re: the POLITICS of evolution: @TheFix flags Pew survey showing only 19% of voters believing in Darwinian evolution http://t.co/ZMvAj6z5Lr