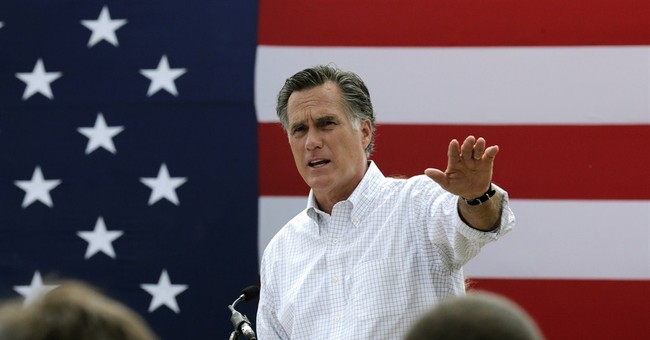 Details have been bleeding into the press for days now, and the emerging picture strongly suggests that the GOP's 2012 presidential nominee is angling to take a third crack at a White House run after all. Mitt Watch: 2016

struck me as a silly exercise as recently as a few months ago, when the former Massachusetts governor was still adamantly denying that he harbored any intention of entering the fray.  Then, with Jeb Bush making tell-tale moves toward launching a presidential campaign, I further reasoned that the likelihood of Romney jumping in was growing even more remote.  With a well-known, well-funded, well-connected Republican establishment-leaning standard bearer planting his flag in a major way, any remaining raison d'être for a Romney candidacy would basically vanish, right?  Wrong, according to a "senior GOP source:"


Apparently Ann is more or less on board, too, which is relevant; remember, her exhaustion and recalcitrance was said to be one of the big reasons Mitt's response to 2016 chatter was consistently some variant of, "no, no, no, no, no." By the way, this report via an unnamed source based on an alleged private conversation isn't an isolated piece of evidence.  The Romney drumbeat has grown a lot louder lately:

Mitt Romney told an audience of Republican donors in New York on Friday that he is seriously considering a third presidential bid. "Mitt told the group of 30 or so guys that were there that he is considering a run for the White House and that they could go tell their friends," a source in the room told CNN. The Wall Street Journal first reported the comments. Though his loyalists and supportive donors have floated his name as a potential candidate for the better part of a year, Romney himself has been more reticent about mounting another White House bid after his 2008 and 2012 losses. But Romney's outlook has changed in recent weeks, according to people who have spoken with him recently, and he seems to be more serious than ever before.


Political Twitter has been abuzz with theories about what Romney's really up to.  Allahpundit lays out a few of them here, including a scenario in which Romney really just has his eye on doing what he can to prevent Jeb from sucking up too much oxygen and establishing a stranglehold on some critical mass of the party's money men.  Under this theory, Romney would step aside when the time was right bestow his endorsement (and all that would entail) upon a Marco Rubio-type candidate (Paul Ryan is officially out).  That's…possible, I guess.  Those machinations would either mean that Romney harbors some sort of ill will toward Jeb, or that he's convinced that no Bush can win another national election.  But let's apply Occam's razor here.  Isn't it more likely that Mitt Romney is just an ambitious man who's tasted the presidency, still believes he's be a good president, has enjoyed the flurry of 'buyers remorse' polls since Obama's re-election, feels vindicated by a slew of correct predictions, has lots of chits to cash in, knows he can raise serious cash quickly, and has a turn-key operation at his fingertips?  The gist: "Hey, I won 61 million votes not too long ago.  The Democrats' Bain/greed attacks will feel stale, and Hillary is an easier target for counter-attacks on that front.  Maybe third time's the charm."  And before conservatives line up to decry the potential entry of another "RINO" into the race, consider this: If Jeb, Mitt and Christie all run representing the more moderate wing of the party, won't that dilute the potency of that primary constituency?  Let's say Jeb and his fundraising juggernaut runs up against Rubio and Cruz and Rand and Walker and Jindal, etc., wouldn't that supply Bush with an unobstructed track to the nomination?  Parting thought:  I genuinely like and respect Mitt Romney, but please explain how this ad would fail hit its mark two years from now, even if some of its details remain sketchy, and even if Hillary is more vulnerable on wealth and Wall Street ties?

CNN Accuses Tucker Carlson of Getting His Facts Wrong, But They End up Beclowning Themselves
Redstate
Report: Nike, Coke, other companies lobbying against bill that would ban goods made with slave labor of Uighurs in Xinjiang
Hotair