Bob Schieffer: I've Heard That If Jeb Doesn't Run in 2016, Romney Might 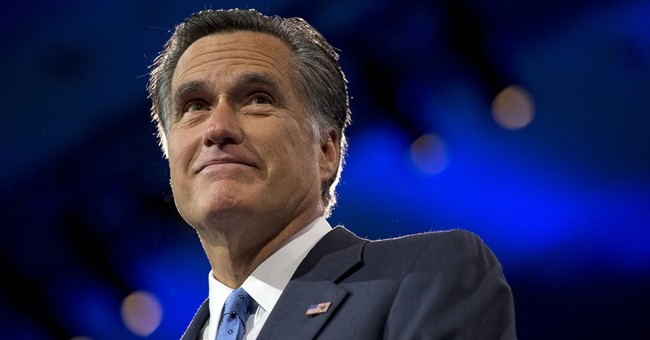 And now, an obligatory 2016 speculation post. Face the Nation anchor Bob Schieffer says he has "a source" who tells him that if former Florida Governor Jeb Bush opts not to run for president next time out, Republicans may see the return of...Mitt Romney:

On Sunday morning, CBS' Bob Schieffer said not to write off the idea of a 2016 campaign by Romney so quickly. "I have a source that told me that if Jeb Bush decides not to run, that Mitt Romney may actually try it again," Schieffer said. During a political panel discussion, the "Face the Nation" host said that he has been told that Romney will consider seeking the Republican nomination for the presidency in 2016 if former Florida governor Jeb Bush chooses to sit the race out. Romney and Bush are considered similar candidates -- both moderate former governors who enjoy the support of much of the GOP establishment but draw skepticism from the party's conservative ranks. Several major Romney donors told The Washington Post earlier this year that Bush would be their preferred Republican candidate in 2016. After shrinking out of the public light following his crushing loss to President Obama in 2012, Romney has slowly reemerged as a coveted political ally for Republicans seeking office this year.


With all due respect, Schieffer's comments hardly qualify as a meaningful scoop. His source isn't merely anonymous; we have absolutely no concept of how well-placed this individual might be. If it's a top GOP insider with deep ties to the Romney camp, that'd be one thing -- but for all we know, the big tip could have been baseless wish-casting by some low-level admirer. The hypothetical scenario Schieffer paints also relies on a combination of "ifs" and "mights," which may be the lifeblood of political punditry, but it's not news. Most importantly, Mitt Romney himself has been categorical and emphatic in his denials that he'd consider running again. Can a door be pressed shut any more tightly than this?


But he only said 'no' eleven times! Why not an even dozen? C'mon. He's not running.In the documentary Mitt, which was released late last year, it was made painstakingly clear to viewers that Romney had to be lobbied heavily to run in 2012. After the frustrating crucible of his 2008 campaign, he didn't want to put his family (especially his wife with MS) through another ordeal. Nevertheless, the Romney's scaled that mountain one last time, and fell short of the summit. It is nearly impossible to imagine Romney putting Ann through all of that again. His words don't just leave the same impression -- they adamantly confirm it. As Mitt comprehensively forswears another bite at the apple, the youngest Bush brother appears to be warming to the idea of a presidential bid. Jeb Bush told a group at a charitable fundraiser last week that he's "thinking about" taking the plunge. Let's face it, Jeb has a lot going for him: He's a smart and capable guy who'd jump into the fray with a formidable, turn-key money network all but in place. He's got bona fides as a popular, successful and conservative swing state governor, not to mention his Spanish fluency and instant name recognition, courtesy of his dynastic political family.

But that last point is a double-edged sword for obvious reasons. Most Americans say they're wary of another Bush presidency, despite the fact that Jeb's father and older brother have each bounced back from polling doldrums after leaving office. Hell, the Bush family is split on whether they're prepared for another one of their own to occupy the Oval Office. And does the GOP want to go anywhere near a head-to-head competition between the Bush and Clinton political brands? Then there's the issue of the Republican primary electorate. Grassroots conservatives aren't keen on Jeb for a number of reasons, and if Christie runs, Bush would be in for a real slug fest just to lock up the center-right element of the party. Plus, unlike the last few cycles, the (very preliminary) 2016 GOP field is shaping up to be packed with heavyweights. While Republican voters were eager for a savior to swoop in and sweep them off their feet in 2008 (Fred Thompson?) and 2012 (Rick Perry?), the coming round promises to be pretty impressive. Would a former governor -- laden with complicated family baggage, and who's been out of office for nearly a decade -- have a legitimate shot at emerging victorious?

Parting thoughts: If the key to the Republican nomination is bridging the grassroots/establishment gap, who's best suited to do that? Rubio? Jindal? Walker? Pence? Finally, coming full circle, beware the political denial:

Now feel free to resume not thinking about the 2016 presidential election, as it is still early 2014.
Maybe the San Francisco School District Hasn't Learned Its Lesson After All When It Comes To Priorities
Rebecca Downs