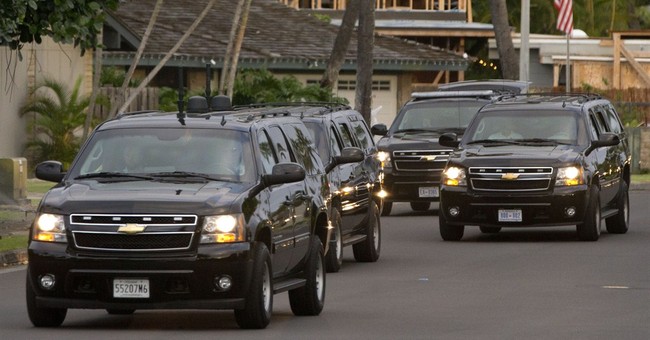 Earlier today, the president's entourage drove right past the VA medical center in Phoenix that found itself at the center of last year's firestorm over falsified wait lists and substandard care, a scandal that stirred outrage and rocked the federal veterans' healthcare system.  Obama was in town to deliver a rah-rah speech about the improving US economy, for which he's scrambling to take credit.  He's in the process of attending a string of similar rallies across the country in advance of his State of the Union Address later this month.  The tour's themes are by now quite familiar.  In short, my policies have been successful, and now is the time for additional "investments" and government interventions.  Curiously, the president couldn't be bothered to stop by the Phoenix VA, a towering monument to big government corruption and incompetence.  His priority instead was to lecture a partisan, cheering crowd about the urgent need for more big government programs.  Some veterans were none too pleased by the snub:

President Barack Obama angered veterans by not visiting the troubled Phoenix Veterans Affairs hospital at the center of a nationwide wait time scandal while in town for a speech. Obama's motorcade drove right past the facility on the way to the high school where he delivered his speech on the housing recovery Thursday morning. A small group of veterans were among an eclectic collection of Obama protesters and supporters across from Central High School. Vietnam-era veteran Jesus Miramon was wearing his old U.S. Army dress uniform and holding a sign saying "do not hate vets today." Miramon says the president missed a chance to show veterans he cares by stopping at the VA hospital. White House spokesman Josh Earnest says Obama is committed to fulfilling the nation's promises to veterans.


Oh yes, Obama is passionately committed to fulfilling all those promises to veterans, as evidenced by his attentive leadership on the matter throughout his presidency. He says one thing on the campaign trail, he does another.  In the meantime, his administration and the bureaucracy applied pressure on the VA's Inspector General to water down his findings on the impact of delayed care.  The IG complied, then backtracked amid furious criticism.  In spite of sunlight finally exposing its insidious dysfunction, the system is still broken, and will be very difficult -- if not impossible -- to fix.  By the way, Obama did have time to make an unannounced stop in Phoenix.  He swung by a housing development for a photo-op and a few remarks.  That detour, unlike the VA facility, allowed him to stay on message.  Gotta keep that dubious public opinion "comeback," or whatever, on track.  I recognize that presidents can't be all things to all people, and that schedule constraints are real.  This president seems to have a special talent for uniquely galling optics as it pertains to "no" RSVP's.  His indefensible Ft. Hood agenda springs to mind, of course...and he literally drove right past this place in Arizona, with some diabled vets waiting outside:

The president's limo drives past the Phoenix VA as veterans watch. He did not stop or mention the VA today. @12News pic.twitter.com/A1WNVOiPs9


For an optics-obsessed presidency, Obama's lapses on that front are at times truly astounding.