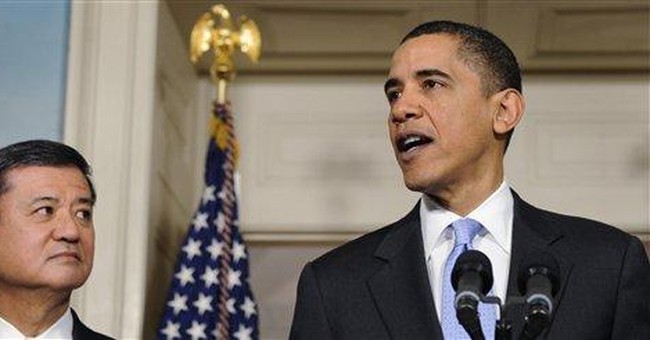 These "isolated cases" (Sec. Shinseki) that may or may not be indicative of a larger problem (Jay Carney) certainly are piling up. The latest is out of New Mexico, via The Daily Beast:

Add Albuquerque, New Mexico’s to the growing list of VA hospitals accused of keeping secret waiting lists to hide delays for veterans seeking medical care. And it may already be too late to get to the truth and find out what harm, if any, was done to veterans there—VA officials are already destroying records to cover their tracks, a whistleblower inside the hospital tells The Daily Beast...“The ‘secret wait list’ for patient appointments is being either moved or was destroyed after what happened in Phoenix,” according to a doctor who works at the Albuquerque VA hospital and spoke exclusively with The Daily Beast. “Right now,” the doctor said, “there is an eight-month waiting list for patients to get ultrasounds of their hearts. Some patients have died before they got their studies. It is unknown why they died, some for cardiac reasons, some for other reasons.” There’s no proof yet that veterans died while waiting for treatment, like what allegedly happened in Phoenix. But the doctor says it’s quite possible that some veterans would still be alive if they hadn’t been pushed through a record-keeping trap door that buried their requests for medical care.


Can you imagine how shocked the president must have been when someone forwarded him the link to this story? This quote makes it sound as if the VA's book-cooking scheme was a relatively open secret:

When another of the doctor’s colleagues, a physician in a managerial position at the Albuquerque VA, saw the initial story about secret wait lists break he heard him say, “I always knew that Phoenix was better than us at playing the numbers game.”


Man, those guys and Phoenix had cynical ass-covering cheating down to an art. How many VA "artists" have been at work across the country for years, protecting their bonuses by gaming the system and placing vets' lives in danger? As we discussed yesterday, even some of the administration's defenders are telegraphing that this mess could pose a larger political problem than other previous scandals -- which were covered, then ignored, then dismissed by much of the mainstream press. Washington Post columnist Dana Milbank has called for Eric Shinseki's resignation, citing the Veterans Affairs Secretary's "maddeningly passive" response to recent revelations. ABC News' Jonathan Karl -- who has been excellent on other issues, too -- points out that the man nominated to replace the now-resigned Robert Petzel (this guy, who was about to retire anyway) has some embarrassing baggage of his own:


This doesn’t look good. The person nominated two weeks ago to replace the VA’s outgoing undersecretary for health was responsible for supervising one of the hospitals at the center of the current scandal. Dr. Jeffrey Murawsky was nominated on May 1 to replace Dr. Robert Petzel as undersecretary of health at the Department of Veterans of Affairs. Petzel’s “resignation” was officially announced today, although his impending retirement was first announced last September. Murawsky is currently the network director–effectively the CEO–of the VA region that includes the Edward Hines, Jr. VA Hospital in Chicago. Before he moved up the VA hierarchy, he worked as a manager at the hospital. That hospital, the Associated Press reported yesterday, is under federal investigation for allegedly keeping secret lists to conceal how long veterans wait for health care.


In other words, he'll make a fine replacement. President Obama, we're told, is "madder than hell" about everything (see this post for the problem with that expression of detached anger), so the GOP produced a video illustrating how frequently President Aloof relies on this trope to convey frustration with bad behavior happening within his own executive branch:


First, he's hopping mad, then he demands (and subsequently can't comment on) investigations, at which point further questions start getting dismissed as partisan, followed by the "phony" downgrade, and then the issue is re-framed as totally old news anyway. Meanwhile, conservatives ought to anticipate the Left's "solution" to this, which is the same approach they take on virtually every problem: Spending more taxpayer money. Congressional liberals hilariously tried to blame the IRS scandal on lack of funding, and falsely claimed budget cuts were a contributing factor to the Benghazi massacre. Despite that talking point having been completely debunked several times over, they're still employing it to this day. And with that in mind, I'll leave you with this:


The second group of stats pertains to the VA's claims processing backlog, which is a separate but related issue. "Official" average wait times for securing appointments and care would basically be useless anyway, in light of recent allegations. But look over those numbers. The VA's budget has more than doubled since 2008, yet the backlog has more than tripled over roughly the same time span. We now know that care itself has been delayed and denied, too -- and on an increasingly grand scale. Perhaps the influx of claimants has increased year-over-year, but it's still fair to ask where all of that money has been going.