Surprise: WH Says Obama Found Out About VA Scandal On the News 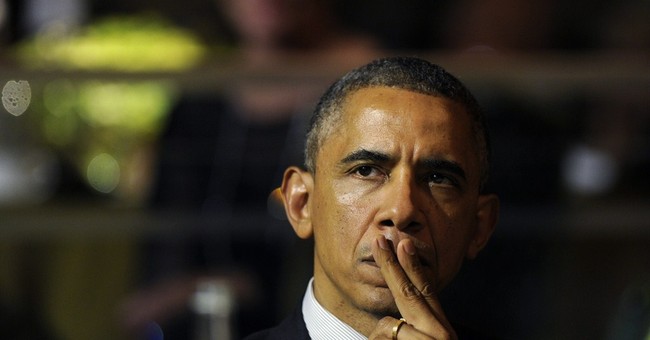 Notice how Carney isn't willing to concede that these "problems" at the VA actually exist just yet; only that "allegations" emanating from within "bureaucracies" have seeped into news coverage. If you missed it earlier, be sure to read Mary Katharine Ham's six-point rundown of the Obama White House's scandal playbook -- which actually didn't include the inevitable "we found out about this on the news like the rest of you" line, perhaps because that goes without saying at this point. Here's Jon Stewart mocking Obama's serial (supposed) aloofness about all things damaging back in 2013:

Since then, we've also been assured that Obama had no idea that this signature law was about to humiliatingly stall on the launch pad (despite flashing, neon warning signs), nor was he aware of the NSA's monitoring of foreign allies' communications. We can now tack the VA scandal onto the growing roster of controversies the President of the United States allegedly first learned about via news reports. I wrote this morning that there have been far too many warning signs for this issue to have snuck up on the brass at the VA:


The GAO raised red flags about wait lists for care in 2012 (virtually no progress has been made in rectifying problems, according to the WSJ), and allegations of fraud were brought to the department's attention on several occasions in 2013. CBS News has noted that at least one major allegation of wait list fraud was investigated and confirmed by the VA last year, yet no action was taken until the news network exposed it this month.


Is it possible that none of those problems ever rose to the presidential level? Maybe. It's at least plausible, given how little personal management and oversight Obama devoted to his own legacy legislation. Should the president have known about any of this? The Washington Times reports that Obama's 2008 transition team was alerted to concerns about this exact practice years ago, which presents both a headache and an opportunity for the Obama spin team. On one hand, they can Blame Bush -- another staple of their crisis management handbook. On the other hand, the fraudulent scheme appears to have metastasized on O's watch...after he made a big deal out of improving conditions at the VA as a candidate. It was a virtuosic political play at the time, of course. Obama could run against the Bush-tied GOP for starting a war that had grown highly unpopular, while twisting the knife by attacking the outgoing administration for failing to "do right by our veterans." The unsubtle message: These Republican 'chicken hawk' cowboys sent our boys abroad to die in an ill-advised war of choice, then didn't even have the decency to make sure the maimed were taken care of back home. An Obama administration would be different. No more foolish foreign entanglements that fail to advance American national security interests, plus a new emphasis on restoring our sacred commitment to the men and women who've worn the uniform once they've returned from the battlefield. That's a winning message, perfectly suited for the country's mood. Neither promise has been kept, alas, the latter one especially. If Obama cares as much about fixing the VA's dysfunction as he's claimed, his own due diligence would render the "I didn't know" excuse moot. The other option is that the well-being of our wounded and sick veterans wasn't quite the priority he wanted us to believe it was. Either choice is ugly. I'll leave you with this flashback quote from Sen. Obama, working himself into a righteous lather over the urgency of addressing the VA's endemic failures:

"When 400,000 veterans are stuck on a waiting list for claims, we need a new sense of urgency," said Sen Obama in 07: http://t.co/HlayjGUWsd


Evidently, the "urgency of now" wasn't quite as fierce as Obama said it was, perhaps because once he'd achieved his central goal (attaining power), the difficult work of accountable governance felt like an annoying afterthought. Plus, dude: 2007 was, like, seven years ago.