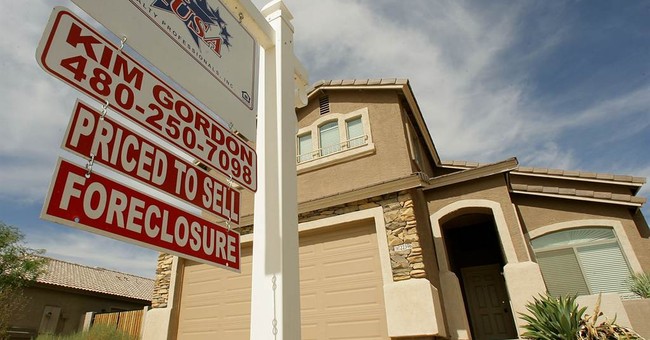 At a high school in Phoenix Wednesday, President Obama claimed his administration's policies are responsible for the nation's recovering housing industry, despite the fact that his administration's signature housing initiative, the Home Affordable Modification Program, harmed almost as many homeowners as it helped.

The centerpiece of the housing plan Obama outlined in Arizona in February 2009 was HAMP, a program that used Troubled Asset Relief Program funds to pay mortgage lenders to reduce monthly mortgage payments for homeowners that were behind on their payments.

At the time Obama said the program would help 4 million homeowners avoid foreclosure. But according to the latest TARP Special Inspector General's report, the program has been a total failure. Less than half, just 1.3 million homeowners, have received "permanent" loan modifications through the HAMP program.

The Garwood family of Michigan, for example, lost their home after they were promised lower payments through TARP, but later got lost in a maze corporate/government bureaucracy. "It's got to be borderline criminal," Terry Garwood told The Huffington Post. "Basically it allowed them to steal my house from me."

Not only were the Garwood's not alone, but Obama Treasury Secretary Tim Geithner later revealed that HAMP was actually designed to help Wall Street banks at the expense of American homeowners. Former-TARP Special Inspector General Neil Baraofsky recounted in his book, Bailout: An Inside Account of How Washington Abandoned Main Street While Rescuing Wall Street:

For a good chunk of our allotted meeting time, Elizabeth Warren grilled Geithner about HAMP, barraging him with questions about how the program was going to start helping home owners. In defense of the program, Geithner finally blurted out, "We estimate that they can handle ten million foreclosures, over time," referring to the banks. "This program will help foam the runway for them."

A lightbulb went on for me. Elizabeth had been challenging Geithner on how the program was going to help home owners, and he had responded by citing how it would help the banks. Geithner apparently looked at HAMP as an aid to the banks, keeping the full flush of foreclosures from hitting the financial system all at the same time. Though they could handle up to ‘10 million foreclosures’ over time, any more than that, or if the foreclosures were too concentrated, and the losses that the banks might suffer on their first and second mortgages could push them into insolvency, requiring yet another round of TARP bailouts. So HAMP would ‘foam the runway’ by stretching out the foreclosures, giving the banks more time to absorb losses while the other parts of the bailouts juiced bank profits that could then fill the capital holes created by housing losses.

The Garwood's were just one of the millions of homeowners Geithner used to "foam the runway" for Wall Street banks.

This is the program Obama credited with saving the nation's housing market in Phoenix today.