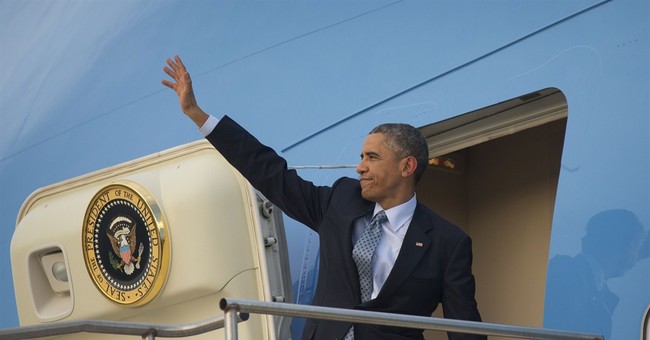 According to Fox News' recent report, President Obama's unilateral executive amnesty could drop as early as this week. The president had indicated that he'd give Congress some time to conform to his will before unleashing this extraordinary power grab, but perhaps that timeline has shifted for some reason. Some had speculated that he'd hold off at least until December 7 in order to give Sen. Mary Landrieu one last gasp at re-election before enraging most of the public, but it wouldn't be much of a surprise if the White House has followed national Democrats' lead by privately chalking up her seat as a lost cause at this stage.  In the meantime, Obama is issuing extortionary statements, offering Congress one last chance to comply with his demands before he has 'no choice' but to leave them in the dust:

This is among the most remarkable statements I have ever seen. It’s almost self-parodic. pic.twitter.com/FPWlXDK8ge


Stop perceiving executive authority abuses and do as I say, he explains.  It's such a "very simple solution," people.  Get with the program.  Obama and his indefatigable water-carriers have been setting the stage for his royal decree for months; over the weekend, the New York Times'  Ross Douthat clarified why an action we've become conditioned to accept as inevitable is deeply harmful to our Constitutional system:

The White House’s case is straightforward: It has “prosecutorial discretion” in which illegal immigrants it deports, it has precedent-grounded power to protect particular groups from deportation, and it has statutory authority to grant work permits to those protected. Therefore, there can be no legal bar to applying discretion, granting protections and issuing work permits to roughly half the illegal-immigrant population...The reality is there is no agreed-upon limit to the scope of prosecutorial discretion in immigration law because no president has attempted anything remotely like what Obama is contemplating. In past cases, presidents used the powers he’s invoking to grant work permits to modest, clearly defined populations facing some obvious impediment (war, persecution, natural disaster) to returning home. None of those moves even approached this plan’s scale, none attempted to transform a major public policy debate, and none were deployed as blackmail against a Congress unwilling to work the president’s will. And none of them had major applications outside immigration law. No defender of Obama’s proposed move has successfully explained why it wouldn’t be a model for a future president interested in unilateral rewrites of other areas of public policy (the tax code, for instance) where sweeping applications of “discretion” could achieve partisan victories by fiat. No liberal has persuasively explained how, after spending the last Republican administration complaining about presidential “signing statements,” it makes sense for the left to begin applying Cheneyite theories of executive power on domestic policy debates.


Click through to read Douthat's commentary on how Obama's expected move is even more audacious in the wake of the 2014 electoral wave.  We'll return to his important "limiting principle" point in a moment, but it's worth underscoring Douthat's first point.  When Josh Earnest and other surrogates attempt to cite reams of precedent to demonstrate how Obama's de facto mass legalization of millions of illegal immigrant adults is really a non-story if you really think about it, they'll be deliberately distorting the truth.  The scope and implications of this president's anticipated action would drag the United States into uncharted waters -- and the man responsible would be this now-unrecognizable opponent of expanding executive power:


That man is now on the precipice of simply imposing sweeping changes to our national immigration policy by his lonesome -- not just "deferring" action on deportations for millions at his "discretion," but also proactively issuing work permits.  He's not even using a fig leaf of "crisis" to justify his action; in fact, his previous foray in this area directly precipitated (at least in large measure) the unaccompanied minor crisis that roiled our Southern border earlier this year.  Only the Republican-held House of Representatives took formal action to address that genuine problem, about which the White House was first warned two years ago.  Back to "where does it end?"  It's a crucial question, and Allahpundit suggested last week that maybe Republicans ought to start asking it, loudly, to remind reflexive liberals that precedents have consequences:

That’s the state of Hopenchange in 2014 — tossing unconstitutional, highly divisive policy grenades in hopes of triggering a shutdown or even impeachment. Just because it might help Democrats politically. So here’s an idea. Boehner and McConnell call a press conference flanked by Marco Rubio, Rand Paul, Ted Cruz, and Paul Ryan. If any Republican governors eyeing 2016 want to attend too, they’re invited — Christie, Walker, Jindal, Jeb Bush, whoever. At the presser, B&M make a short statement: The GOP intends to challenge Obama’s amnesty in court as an unconstitutional infringement on separation of powers. If, however, they lose that suit, they’ll encourage any Republican successor to O to use the amnesty precedent in other areas of policy, starting with tax reform. Specifically, they’ll advise the president to issue an executive order barring the IRS from collecting more than 10 percent of adjusted gross income from American taxpayers, a de facto flat tax. Like Obama’s amnesty, that order will be temporary; a Democratic successor could rescind it with one stroke. Like Obama’s amnesty, that order will be aimed at a highly contentious issue on which Congress is currently deadlocked. If the opposition party doesn’t like the order, they can simply join the majority party in Congress in passing a compromise bill that supersedes it, just as Obama always says about the GOP and immigration. The point, obviously, is that the practice of dubious executive power grabs at Congress’s expense can work for both parties. And will.


I'll leave you, as I often do in posts pertaining to this topic, with a reminder from one Barack Obama, speaking in 2012:

Obama may have undermined his case because he has insisted time and again that he's the president, not the king, and "can't just make the laws up by myself." In a 2012 interview with Telemundo, Obama defended his decision to defer deportations for children but said he couldn't go any bigger. "If we start broadening that, then essentially I would be ignoring the law in a way that I think would be very difficult to defend legally. So that's not an option," he said then.


He said similar things about the DREAM Act-style DACA decision activists were demanding he make, of course, then changed his tune and green-lit the plan.  Legal constraints seem to melt away when Obama's political interests "necessitate" change.  And if you don't like it, don't forget that "very simple solution" at your disposal: Just give him what he wants, and you can keep your precious Constitutional order.