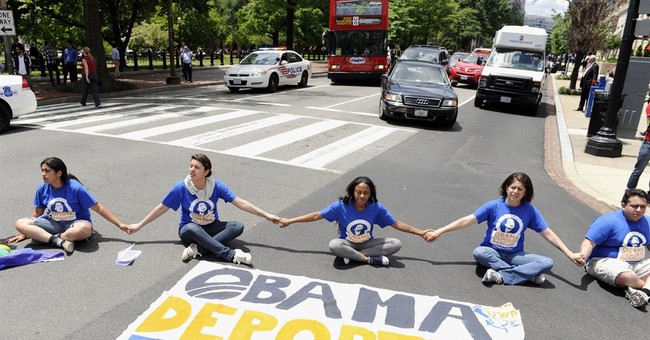 The president's long-anticipated executive action to unilaterally afford temporary legal status to between five and eight million adult illegal immigrants may be pushed off until after the 2014 midterm elections, according to several reports.  Appearing on MSNBC yesterday, veteran journalist Jim Warren called the plan "off the table through the elections," presumably in reference to a New York Times  story published over the weekend:


President Obama is considering a delay of his most controversial proposals to revamp immigration laws through executive action until after the midterm elections in November, mindful of the electoral peril for Democratic Senate candidates, according to allies of the administration who have knowledge of White House deliberations. The president vowed in late June to act unilaterally, declaring a deep frustration with what he termed Republican obstruction in Congress. He pledged to act to reshape the immigration system soon after he received recommendations from senior advisers at the end of the summer. But now Mr. Obama and his aides appear to be stepping back from a firm commitment to that timing, a move that could draw fire from immigration advocacy groups who are expecting decisive action soon.


The story quotes incensed immigration activists, upbraiding Obama over his refusal to "stand up to Republicans," and calling the rumored delay "unconscionable."  They're livid over a potential nine-week postponement.  So why would Obama risk upsetting a vocal element of key Democratic constituency?  Pure politics:


Some of Mr. Obama’s advisers are urging him to postpone action, fearful of the political ramifications of a broad action to protect millions of immigrants in the country illegally from deportation and to provide many of them with official work papers. Such a move by the president, some senior officials worry, could set off a pitched fight with Republicans and dash hopes for Democratic Senate candidates running in Arkansas, Louisiana, North Carolina and potentially in Iowa. Control of the Senate hinges on the outcomes of the half-dozen close races in states where Mr. Obama is not popular, notably in Southern states where opposition to an immigration overhaul runs high, and strategists fear that an immigration announcement could hurt Democratic candidates...Democratic senators have reached out to top White House officials, including Denis McDonough, the chief of staff, to argue that the recent crisis with unaccompanied minors crossing the border into the United States justifies a delay. Several Democratic officials on Capitol Hill said the angry reaction to that border crisis eroded public support for changing immigration policy, and in some cases, turned the issue into a negative one for them.


Democrats' goals are twofold: (1) In the medium-term, they want Obama's action to change the 'facts on the ground' in the immigration debate, so to speak.  Once millions are awarded work permits and "temporary" relief from the threat of deportation, it will be exceptionally politically difficult for future presidents or Congresses to reverse that new reality by re-imposing illegal status onto those people. (2) In the short term, some Democrats are hoping that a sweeping executive action from Obama will goad Republicans into a furious response. Within this breathtakingly cynical calculation, they'd actively root for Obama to push the envelope as far as possible in order to prompt an angry reaction, which could then be exploited to fundraise (they hauled in millions with their "impeachment" nonsense this summer), motivate the liberal base for the midterms, and further erode Republicans' image among Latinos.  This is the veritable definition of bad faith.  What a number of purple and red state Democrats are realizing, though, is that the politics of a massive executive amnesty may, at best, be volatile and risky.  Make no mistake, these nervous incumbents and candidates aren't begging Obama not to overreach and bypass Congress on a major policy issue altogether; they're just asking him to execute his power grab after voters would have an opportunity to punish them for it.  Also bear in mind that Obama himself has stated explicitly in the recent past that he lacks the authority to take the precise action that now seems to be a fait accompli:


Obama may have undermined his case because he has insisted time and again that he's the president, not the king, and "can't just make the laws up by myself." In a 2012 interview with Telemundo, Obama defended his decision to defer deportations for children but said he couldn't go any bigger. "If we start broadening that, then essentially I would be ignoring the law in a way that I think would be very difficult to defend legally. So that's not an option," he said then.


But that was then. Regal powers are now legal and legitimate, apparently. Obama performed a similar about-face before imposing his DREAM Act-style 'DACA' amnesty in 2012.  He made that move because the so-called DREAMers are a fairly small and sympathetic group, and carving out an exception for them had bipartisan support. Extending a similar reprieve to millions of illegal adults is a far more aggressive gambit, particularly in light of the still-unresolved border crisis involving tens of thousands of unaccompanied minors.  Those kids all still being held indefinitely, with more arriving each week.  Harry Reid's Senate, unlike the Republican-held House, left town for the summer recess without addressing that urgent issue. Speaking of the crisis, it is an objective fact that rampant (and false) rumors in Central America of an impending blanket amnesty for children was a major contributing factor to the current border crisis.  Obama's 2012 'DACA' action flipped on a powerful magnet.  How much stronger would its pull become if the president expands the same policy to millions of adults? That's a rhetorical question. Even as a supporter of immigration reform, it's abundantly clear that compounding the ongoing crisis by fueling one of its top triggers is extremely irresponsible, especially if it's done in the form of an executive order of questionably legality in order to bypass the legislative process -- which is difficult by design.  Proponents of Obama "going big" on his own say that pushing the move off until mid-November is unacceptable because people will be deported in the interim, "breaking up families" in the process.  While I'm sympathetic to the idea of not separating families, many of these same people are opposed to reuniting families through deportation vis-a-vis the unaccompanied minor situation.  How curious.  I'll leave you with three immigration activists venting their frustration with Obama for not flipping Congress the bird faster, replete with video of DREAMer agitators disrupting events to yell at Marco Rubio and Paul Ryan (two relative allies on these issues):


I'll reiterate that I'm pretty moderate on the immigration issue, but my empathy wavers when I see people who entered our country illegally berating and lecturing duly-elected members of Congress for not furnishing them with their preferred political resolutions fast enough.  They are not entitled to any immigration reform law, let alone one that meets their various demands (for example: legalization first, border security later, if at all).  They should be in no position to make demands.  Oh, and by the way:


Pew: By 2 to 1, Americans disapprove of the way Obama is handling immigration policy (31-61) http://t.co/GLVSnsLQn8 (h/t @NumbersMuncher)