Over It: 'Steady Stream' of Democrats Leave Campaign Rally During Obama Speech 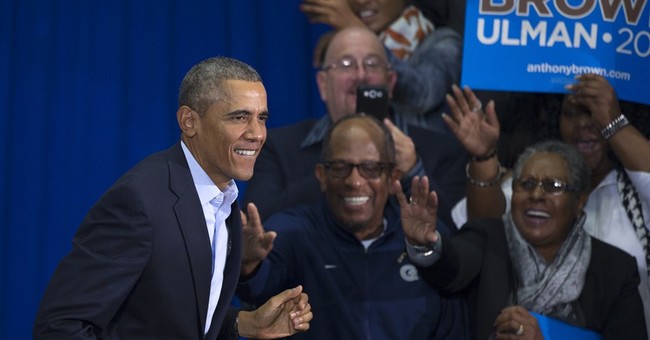 In 2008, they were passing out. In 2014, they're walking out.  These tweets come from mainstream media correspondents who watched in puzzlement as "lots" of Maryland voters departed a campaign rally over the weekend while President Obama was still talking.  Change:

Lots of people, at least up front near where journalists are sitting, appear to be leaving this rally now that Obama has started speaking.

Steady stream of people leaving Maryland rally continues as Obama speaks. It's noticeable and noisy. They would have waited hours to get in.

After waiting a long time for a POTUS speech, don't you want to hear the whole thing? And not just take a phone pic or two and then leave?

President Barack Obama made a rare appearance on the campaign trail on Sunday with a rally to support the Democratic candidate for governor in Maryland, but early departures of crowd members while he spoke underscored his continuing unpopularity. With approval levels hovering around record lows, Obama has spent most of his campaign-related efforts this year raising money for struggling Democrats, who risk losing control of the U.S. Senate in the Nov. 4 midterm election. Most candidates from his party have been wary of appearing with him during their election races because of his sagging popularity. Not so Lieutenant Governor Anthony Brown of Maryland, who is running for governor, and Governor Pat Quinn of Illinois, who is running for re-election….A steady stream of people walked out of the auditorium while he spoke, however, and a heckler interrupted his remarks.


First of all, it is rude to 'noticeably and noisily' walk out of any speech, let alone one delivered by the President of the United States.  Really poor form, which should somewhat temper any schadenfreude conservatives may feel over this humiliation.  Keep two things in mind, though: (1) These were Democratic partisans disrespecting the president they continue to support. If an audience of conservatives had treated Obama in a similar manner, their actions would have already spawned dozens of racially-tinged columns and MSNBC segments. (2) Maryland is one of the few states in which Obama's political brand is not radioactive, which is why he was even invited to the Brown event in the first place.  A recent, massive nationwide survey from the New York Times and YouGov found that the president's approval rating is underwater in 43 out of 50 states.  Obama registered his strongest score in Maryland, a jurisdiction packed with government workers, white liberals with postgraduate degrees, and African-Americans.  Yet even a gymnasium full of Democratic base voters in Obama's best state couldn't be bothered to sit through his remarks. Alas, as the Reuters story goes on to say, it doesn't seem as though Anthony Brown is in much danger of losing to Republican Larry Hogan, even as several recent polls show the race closing to a high single-digit margin.  This tells you everything you need to know about the voters of Maryland.  Lt. Governor Anthony Brown was put in charge of implementing Obamacare in the state, failed miserably, and has been shifting blame and claiming dubious credit for "taking action" to fix the problems over which he presided ever since.  Maryland's healthcare exchange crashed and burned so badly that Brown and company were eventually left with no choice but to abandon it completely, wasting more than $100,000,000.00 in taxpayer money.  For his stellar work, the people of Maryland are poised to furnish Brown with a promotion.

A similar dynamic is playing out in Oregon, home to the mother of all Obamacare debacles.  Not only did Oregon's disastrously failed Obamacare exchange flush away more than $300,000,000.00 without signing up a single person for coverage online, it has been the subject of fraud investigations, including serious allegations that Democratic Gov. John Kitzhaber willfully lied about his knowledge of the meltdown.  Kitzhaber leads his GOP opponent by roughly ten points in the RCP average.  Stunning, costly incompetence and dishonesty don't appear to be fazing voters in these deep blue states, who are essentially saying 'yes, more of that, please.'  Which brings us to Obama's home state of Illinois, where failed Democratic Governor Pat Quinn's approval ratings have languished in the 20's and 30's for much of his term.  He's overseen multiple downgrades to Illinois' worst-in-the-nation credit rating, he's hiked taxes significantly (promising more to come), and he's presided over an exodus of jobs from the state, whose catastrophic public pension obligations continue to spiral. In spite of all of that, Quinn -- the one-time running mate of disgraced felon Gov. Rod Blagojevich -- has stormed back in the polls against Republican Bruce Rauner.  Democratic attack ads have portrayed Rauner as a mean multimillionaire (the Romney script), setting the state for Quinn's comeback.  Though both the centrist Chicago Tribune and liberal Chicago Sun Times have each endorsed Rauner, the incumbent has seized a very small lead in the race, having trailed by double digits for most of the year.  The race now is a pure toss up, which is an extraordinary commentary on Illinois politics.  Obama's now in town to try to help Quinn seal the deal with Chicago voters.  We'll see in a few weeks if empirically failed Democrats are effectively bulletproof in all three of these liberal states.