Why an Abortion Group is Attacking Me to Raise Money

NARAL Pro-Choice America -- an extreme abortion advocacy organization that re-branded in 2003 by scrubbing 'abortion' from its official name -- blasted out a nationwide fundraising email* to supporters over the weekend, entitled, "insulting even for Fox News."  It expressed indignance over some outrageously outrageous comments made recently by a Fox News commentator: Namely, yours truly.  "There's just no making this up," the missive begins, priming recipients to be bowled over by my "unbelievable!" remarks.  Here's a screen shot of the email, which quotes the supposedly offensive question I asked while co-hosting Outnumbered in New York last week: 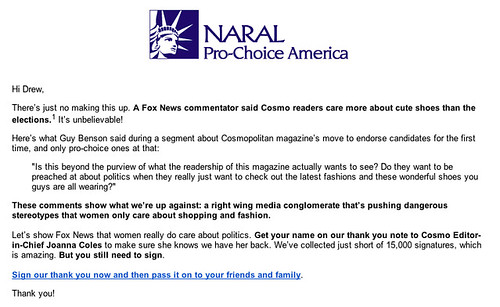 Once you've recovered from the inevitable shock induced by the suggestion that perhaps women read Cosmo for fashion trends and sex tips, as opposed to political endorsements, feel free to watch the full segment:


Oddly, NARAL chose not to highlight this quote, uttered moments before the bit they lifted: "At first blush, I thought [Cosmo's effort] was a good idea.  Get more people engaged, get more women to the polls.  That sounds great."  My quarrel, quite obviously, isn't with the notion of women becoming more politically involved; it's with Cosmo's explicitly-stated editorial guidelines for issuing endorsements: No pro-lifers, period. No supporters of religious liberties upheld in the Supreme Court's Hobby Lobby decision.  And no backers of voter ID laws -- which attract lopsided, super-majority support from the public.  These policies will result in overwhelmingly partisan preferences.  The publication's editors have the absolute right to dispense and withhold endorsements as they see fit, of course, so the focus of our discussion to critique Cosmo's arrogant, narrow definition of 'acceptable' womanhood.   Asked why the magazine wouldn't even consider recommending, say, a female candidate who favors mainstream abortion restrictions, one editor asserted that such policies are not in readers' "best interests."  Hmm.  The vast majority of American women support significant legal limitations on abortion, yet the Cosmo -- ahem -- 'brain trust' evidently refuses to acknowledge that reality, opting instead to condescend to its readers about what is, and is not, in their alleged interests.  The unambiguous point of my question (do note that NARAL didn't pluck any quotes from the ladies on the show who agreed with me) was to suggest that most women who pick up Cosmo do so to leaf through glamorous fashion photos, or to discover "8,042 ways to please their man" in bed.  They don't rush to newsstands to check out whether the mag has endorsed Alison Grimes over Mitch McConnell in the Kentucky Senate race (which they have, natch).


Just as I wouldn't dream of taking my political cues from some force-fed Sports Illustrated feature, I strongly suspect that most women might prefer to enjoy Cosmo for what it is, and seek out more serious sources to influence their voting decisions.  That profoundly uncontroversial proposition was somehow twisted into the breathless averment that a "right wing media conglomerate" is pushing the (dangerous!) stereotype that women "only care about shopping."   That's not what I said at all, but hey: If NARAL needs to manufacture sub-moronic fake "outrages" to rile up their gullible supporters, so be it.  I, for one, consider it a genuine honor to be denounced by an organization whose sole purpose is to to deny unborn children their human rights.  And now seems like a pretty good time to reiterate that national polling consistently demonstrates that NARAL and their ilk are radically out-of-step with most Americans -- especially women and young people -- on these issues.  This special interest group supports taxpayer-funded, late-term abortion-on-demand for any reason whatsoever, and they oppose popular laws that restrict the so-called 'right' to dismember pain-capable children in the sixth month of gestation and beyond.  It's grotesque, inhumane, and extreme.  Both NARAL and Cosmo routinely deign to speak on behalf of "women's rights"… while scrupulously and obstinately ignoring what women actually believe.  There's just no making it up!

*A Cosmo writer insists that I'm "intentionally misleading" readers with this characterization because, in her mind, a petition-style email acquisition blast isn't "fundraising" per se.  It's just a fundraising-related tactic.  Okay.  These kinds of petitions are a major element of fundraising 101, but since the requested parsing doesn't impact my point in the least, I'm delighted to concede her point.  The item reproduced above was a fundraising-related email from NARAL.