CNN Poll: 58 Percent of Americans Oppose Abortion in All or Most Cases 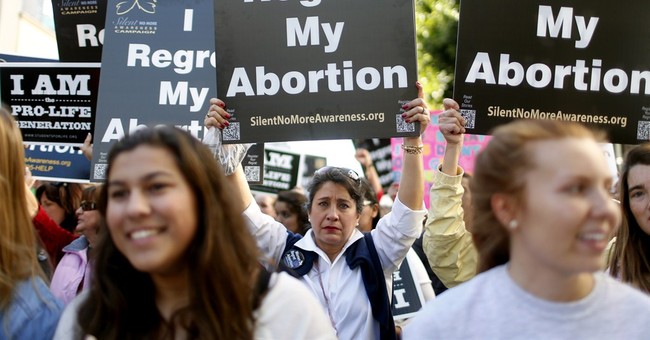 Overlooked in the CPAC shuffle of late last week were the results of a nationwide CNN survey on abortion, the results of which confirm America's anti-abortion trend. A solid majority (58 percent) of respondents espoused viewpoints associated with the pro-life movement; namely, that abortion should be legal under "few" or "no" circumstances. The 'mostly illegal' position represented a strong plurality at 38 percent. Meanwhile, just 40 percent of Americans said that the practice should be "always" or "mostly" legal. Also, public financing of abortion remains heavily unpopular:


The poll showed that less than one-third of self-identified Democrats embrace the legal abortion in all circumstances -- an extreme position embraced by President Obama and Planned Parenthood. That organization's president recently stated that she didn't believe life begins until after birth, dismissing the core underlying question as irrelevant. Another Planned Parenthood official offered shocking testimony last year that the "right" to abortion may extend beyond the womb. Unfortunately, CNN did not provide the internals of its poll, so I can't review the breakdown of responses along gender and age lines. Fortunately, CNN's overall results are virtually identical to Gallup's survey released last spring. Those internals revealed that 57 percent of women and young people selected pro-life responses. Former HP CEO and US Senate candidate Carly Fiorina was one of the few speakers at CPAC to address abortion at any length (Chris Christie was another). She pushed back hard against the "war on women" meme in her Saturday remarks:

"I am a proud pro-life woman. Like so many young women who are pro-life today, I believe that science is proving us right every day. I am prepared to accept and respect that not all women agree with me. I know how lonely a woman can feel when she faces a terrible decision. What we are not prepared to accept is that we are waging a war on women simply because we know that an abortion at five months is inhumane to mother and child."


CPAC organizers came under some fire for somewhat de-emphasizing the life at the 2014 confab, but ACU Chairman Al Cardenas defended that decision in an interview with Hot Air's Ed Morrissey. Cardenas pointed that that virtually all speakers at the conference were pro-life and commented that it's clear conservatives have "already won" the battle on this issue within the center-right coalition. The CNN and Gallup polls cited above indicate that pro-lifers are winning the battle well beyond "the choir," too.