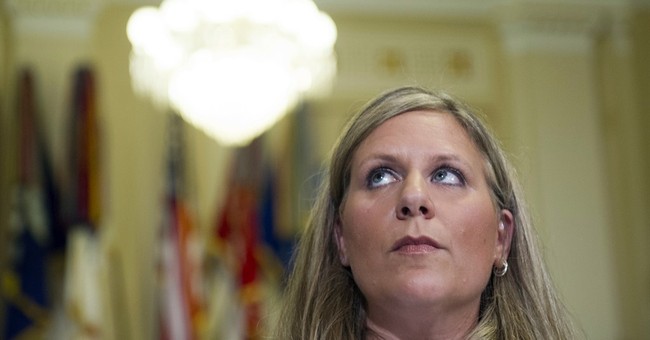 The VA scandal hasn't magically disappeared, even as much of the political class has moved on to fixating on brighter shiny objects -- like the crucial fake issue of birth control "access." More details continue to emerge about the outrageous corruption, shoddy care, and retaliatory culture that has infected the VA system. One whistleblower who testified before Congress this week alleges that the agency's systemic fabrication of data isn't limited to misrepresenting wait times for healthcare; bogus data procedures are also being employed to make the VA disability claims backlog look less severe than it is. CBS News had the story:

"They were instructing us to change the dates of claims -- on any claims, regardless of the circumstances -- if they were older than a certain date," Kristen Ruell told a House Committee. CBS' correspondent also notes that when investigators from the VA's inspector general did a spot check at a facility in Philadelphia last month, they "found a room full of claims-related mail from veterans, up to three years old, and still containing documents not scanned into the system." Ms. Ruell isn't the first person to level this accusation. We highlighted a McClatchy report last month in which a whistleblower made precisely the same claim about the claims backlog. Administration officials have seized on the falsified data to crow about major "improvements," which were really just another mirage. They're cooking the books, fraudulently changing dates, and stacking piles of documents for years, then congratulating themselves over their gerry-rigged stats. In her testimony, Ruell also described the punishment she faced for sounding internal alarm bells: "I raised many issues...instead of solving problems, I was, and continue to be, retaliated against...the VA's problems are the result of morally bankrupt managers who through time and degree have moved up into powerful positions, where they have the power and continue to ruin people's lives." Meanwhile a VA nurse from upstate New York who's embroiled in bitter fight with the agency says she witnessed abusive and substandard care, reported it, and was instructed by managers to step down from her position:

In November, Riviello, a nurse manager, and nurses on her team were advocating for removal of a patient's restraints, she said. The patient had been strapped down at 6:30 in the morning, and remained that way hours later...The patient in question had suffered sexual trauma during her military service, and was breathing with the assistance of a tracheostomy tube. Riviello believed being restrained and under the supervision of a male attendant, as the patient was, could be particularly damaging. But the patient's doctor decided she should remain restrained until after a staff meeting at noon to discuss her situation. The meeting didn't happen. The patient wet herself and began removing her clothes. The male attendant told Riviello he was uncomfortable with the situation. So Riviello made the call to remove the restraints. The patient was cooperative, she said...She reported the incident to her supervisor, who said not to worry. Riviello later complained to a patient safety officer. Within days, Riviello was told to step down as a nurse manager and to convince her staff it was her own idea, she said. Stepping down resulted in a loss of about $6,000 a year in pay. "This is a physician-driven facility," Riviello said she was told. "Physicians don't want to work with you." The move stripped Riviello not only of her work but also of her lifelong identity as a nurse, she said.


Riviello also alleges that dying patients were mistreated and mistakes were covered up: "Dying patients who were supposed to receive morphine to alleviate pain, but instead got a salt-and-water mixture. A nurse treating hospice patients stole the vials of morphine, according to Riviello. She said managers delayed reporting the problem," the Albany Times Union reports. Rep. Jeff Miller, the Chairman of the House Veterans Affairs Committee, told WMAL-AM radio that when his staff arrived for an unannounced spot audit at a regional VA hospital on July 2, they were ushered into a room with "active" microphones and cameras. They also discovered a list on which whistleblowers' names were circled, along with an instruction for workers to "ignore" the investigators. Audio of the interview:


There are many qualified, diligent and compassionate medical professionals who populate the VA. It is a shame that their reputations are being indirectly tarnished by this scandal, but the myopic corruption and negligence of the VA bureaucracy is quite obviously out of hand. The agency's leadership is a disgrace and its culture is toxic. It will take a Herculean effort to reform this mess; the CNN reporter who's covered this scandal from day one says he thinks the agency may be beyond fixing. Undeterred by facts, Obamacare advocates bragged about the VA as a model of government-run healthcare done right. In spite of the still-unfolding horror show at the VA, many of these people are still ideologically committed to exponentially expanding this failure by moving American toward a VA-style, government-administered healthcare system. If they can't get it right for the veterans to whom we owe so much, and around whom there's a strong political consensus, how do they plan to manage a sprawling system for 300 million people? I'll leave you with an always-timely pre-buttal to the inevitable Statist rejoinder: No, funding isn't the issue here.