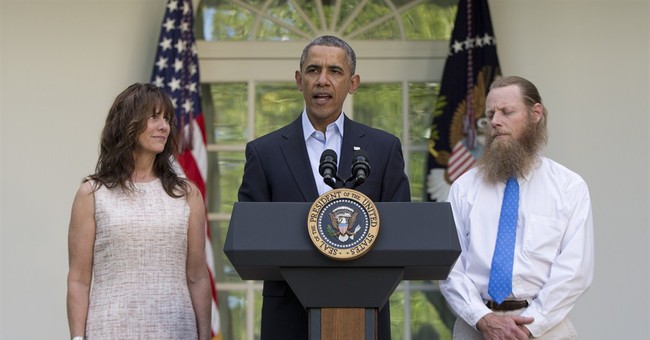 This Politico story is highly revealing, from top to bottom. It paints a portrait of a White House reeling from a festering, self-inflicted political wound that's flailing frantically to regain some measure of control over the narrative. It's also a tad unnerving. This crew is so deep in the bunker that they can't see a major mistake for what it is, preferring to take the mental exit ramp of chalking up the entire maelstrom to "hatred" of Obama -- a claim that requires acute cognitive dissonance, for reasons we'll discuss in a moment. A few choice excepts:

President Barack Obama’s Rose Garden appearance Saturday afternoon with Sgt. Bowe Bergdahl’s parents was an attempt to humanize the prisoner swap to deflect potential criticism of letting five Taliban leaders out of Guantanamo Bay, White House aides say. It didn’t work. White House aides were aware Sgt. Bowe Bergdahl had been tagged a deserter, and that they would be grilled over not keeping Congress in the loop. But they figured people would be most outraged over the national security implications. The White House has been surprised by how much attention has remained on the questions about Bergdahl, from the circumstances of his disappearance to the wild beard his father grew while he was being held that’s even led to Bergdahl’s hometown canceling a celebration. All this, Obama aides say, is in their minds a proxy for the hatred toward the president. The new approach: Frame the criticism as another example of Republicans complaining about something just because Obama was the one to do it. White House aides and other liberal outlets are highlighting what they see as Republican hypocrisy, citing past quotes from GOP lawmakers calling for Bergdahl’s freedom.


Just a few days ago, White House aides were whispering to Chuck Todd that they were utterly shocked by the negative public reception to the Taliban swap; they had been expecting widespread "euphoria." With soldiers who served with Bergdahl prior to his evident desertion coming out of the woodwork to douse the attempted jubilant whitewash with cold water, administration officials shifted to accusing them of "swift-boating" Bergdahl. Now Team Obama has moved on to claiming that they expected some significant backlash all along, but failed to anticipate the flash points and depth of the anger. Flummoxed, they've discarded the entire episode into their catch-all "Obama haters" bin, and are busily crafting a lefty media strategy to highlight Republican "hypocrisy." Their big smoking gun on this point is a series of past statements from Republicans urging the safe return of Sgt. Bergdahl. See? They said they wanted Bergdahl home, and now that Obama's achieved that amazing feat, they're mad because he's the one who did it.

This is a moronic line of argument. Of course many Republicans, and many Americans generally, are heavily inclined to be sympathetic toward a US soldier being held by the enemy. Most of the people who voiced support for Bergdahl likely had no idea about the desertion allegations. Even those who may have heard those rumbles could still have been supportive of a move to bring him home. But the deal Obama struck isn't hypothetical. It isn't some yellow ribbon tied around an oak tree. It's real, and it's very messy. Thus, there's new information on the table (some of which was deliberately suppressed via non-disclosure agreements and exhortations to shade the truth). And based on that changing information, and the incensed reaction from Bergdahl's platoon mates, people's opinions are shifting. Imagine that. What we now know is that the White House negotiated with the Taliban, a horrible, radical group that most people consider to be terrorists. (Also, the Haqqani network, which is officially classified as a terror group). Beyond that, our "negotiators" made major concessions, basically giving the Taliban everything they asked for. And what they asked for was the release of five jihadist commanders that our own government classified as high-risk detainees. Then there's the issue of failing to inform Congress in a timely fashion, which broke a law that Obama himself signed. Finally, there are the sordid and increasingly plausible accusations that Bergdahl is a deserter who may have collaborated with the enemy. Several members of his unit have now publicly stated their strong suspicion that Bergdahl helped the Taliban hone their anti-US bombings. The Taliban said he was doing as much in 2010, as reported in a British newspaper. There is a difference between spitefully opposing Bergdahl's return outright and having profound problems with the way the dominoes fell. The Huffington Post's Sam Stein, a noted Obama hater, scoffs at the administration's new line:

WH spin doesn't make sense. If they knew about controversy surrounding Bergdahl leaving base, why have Rice laud him? http://t.co/2T32ZLhn37


Maybe they could claim that Rice spoke out of school with her infamous "honor and distinction" line, but no. The Politico piece says those offensive comments were carefully chosen: "Even though they were aware of the deserter questions, the lines she and other aides have been using to defend Bergdahl’s record were no mistake." So they intentionally sent her out to praise him, just as they made a choice to hold a celebratory event in the Rose Garden. But...they also say they knew the desertion/collaboration stuff would be an issue. It's incoherent. It appears as though they're also planning to lean more heavily on chest-thumping emotionalism, exemplified by President Obama's comments in Poland yesterday:

“Regardless of the circumstances, whatever those circumstances may turn out to be, we still get an American soldier back if he’s held in captivity. Period. Full stop. We don’t condition that.”


Harry Reid took things a step farther, arguing that the appropriate course of action is to "rescue our soldiers first and ask questions later." Both Obama and Reid's sentiments sound stirring and uplifting, but they're also also specious. What if the Taliban's demand had been the unconditional release of KSM, the mastermind of 9/11? Or the immediate freeing of all Gitmo detainees? Or a nuclear weapon? Would we have said 'yes,' and asked questions later, "full stop"? Of course not, so let's dispense with that ridiculous standard as a meaningful defense. This was a difficult decision based on a number of factors, including national security concerns and precedent. Based on what we currently know, a lot of people have concluded the White House made the wrong choice, with potentially disastrous consequences. If that's all rooted in Obama 'hatred,' then we're witnessing the emergence of some rather unlikely haters -- from Sen. Dianne Feinstein (D-CA) to former Obama SecDef and CIA chief Leon Panetta, to Chris Matthews (!), to worried Afghan villagers, to defense and intelligence officials, to the soldiers who served with Bergdahl and risked their lives searching for him. It's that last group that's leading this charge, and their passion has nothing to do with Barack Obama, despite what White House advisers suffering from reflexive myopia want to believe. These guys were betrayed and personally endangered by Bergdahl's actions. At least six of their friends were killed trying to bring him back to safety, in spite of the indications that he willfully deserted them. It requires some nasty brew of cluelessness and sociopathy to insinuate that these actual heroes, and the people who have their backs, are engaged in this issue in order to score a few cheap partisan points. Good luck with that argument. I'll leave you with this: