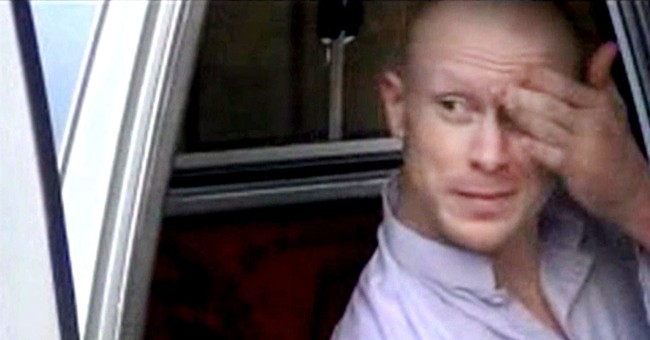 You'll recognize the term, obviously, as a throwback to the 2004 election. Democratic nominee John Kerry was harshly criticized by a group of his former comrades in arms called the Swiftboat Veterans for Truth. They ran brutal ads featuring his own words against him, like this one:


"Swiftboating" quickly became a dirty word on the Left, synonymous with smearing. Liberals descended into a blind rage over war veterans speaking their mind in such a way that damaged Democrats' electoral prospects. And now the S-word has vaulted back into our political lexicon, courtesy of Obama White House aides. Truly remarkable:

“I’ve had a few aides describe it to me as ‘we didn’t know that they were going to Swift Boat Bergdahl’.”


John Kerry's words and actions may have been viewed as outright treachery by the men rotting away in North Vietnamese POW camps, but no one ever accused him of desertion. Indeed, as Democrats so often reminded us during that campaign, he won three purple hearts (they typically edited out the bits about him symbolically throwing away medals). Bowe Bergdahl, by contrast, was determined by the US military to have deserted his post, allegedly leaving a desertion note behind. His fellow soldiers have confirmed as much, with some of them -- backed by US intelligence and contemporaneous reports -- explicitly suggesting that he may have actively collaborated with the enemy. In using the verb "swiftboating," Obama administration officials are effectively defending Bergdahl's service record (Susan Rice said he served with "honor and distinction"), and attacking his platoon mates as politically-motivated smear merchants. This is beyond shameful. Team Obama has been stunned by the backlash to their Taliban Five swap, which they thought would prompt nothing but hosannas, so they've been reduced to anonymously lashing out at the soldiers who are finally free to vent about the man who betrayed them. These veterans may not have felt compelled to go public if the White House hadn't cynically dressed up Bergdahl's release as the joyous return of a hero. Watching the president hold a Rose Garden event with the parents of a known deserter, and hearing Susan Rice use the words she did, was apparently just too much to bear. And now the people who tried to choreograph this is highly dubious trade as a national triumph are flinging mud at truth-tellers. The guys who didn't abandon their post. The guys who risked their lives searching for Bergdahl, and had friends die in that pursuit. I wish this question were too far-fetched to be realistic, but I'm not convinced it is:

Wonder how long it is before oppo on outspoken members of Bergdahl's platoon starts popping up.


I'll leave you with two items: (1) This piece, which posits (not unconvincingly) that Obama and his political team miscalculated basically everyone's response to this development because they are so far removed from military values and culture. Shocked by the anger and dissent, they appear to be hastily retreating to their comfort zone: Partisan attacks. (2) A State Department spokeswoman asserting that we should trust Bergdahl's account over statements from his squad members:


Questions: What incentive do all of these soldiers have to lie? And didn't Bergdahl, um, leave a note confirming their version of events? Defense Secretary Chuck Hagel is admonishing people against jumping to "unfair" conclusions about Bergdahl. He's no doubt entitled to due process, but has Hagel seen…his own department's findings on the guy?


UPDATE - Liberal commentator Van Jones accused Bergdahl's platoon mates of being party to an "orchestrated" GOP "smear campaign" on CNN last night. So they're really going there, huh? As a point of reference, Jones resigned from the Obama administration after it emerged that he had signed a 9/11 truther petition.