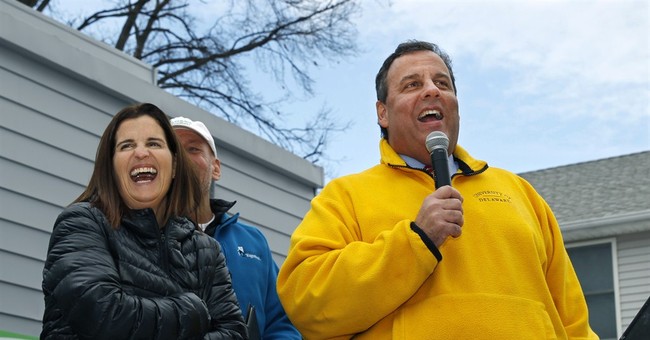 A featured item on national Democrats' anti-Christie punch list is to create a political climate in which Republicans come to view Christie as radioactive, and force him out as chairman of the Republican Governors Association. The RGA's overriding purpose is to raise money to support GOP gubernatorial candidates around the country. It's essentially and primarily a bank account, which is why this news makes it highly unlikely that Christie is going anywhere:


The Republican Governors Association said Tuesday that it set a monthly fundraising record in January, a $6 million haul that comes despite the traffic-scandal troubles of its chairman, New Jersey Gov. Chris Christie. The announcement is unusual for the RGA — the group typically releases its fundraising results less frequently — and it is a show of strength for Christie the same day he visits Chicago for a fundraising swing. The association raised the $6 million in January “with the help of Chairman Christie and all of our Republican governors,” RGA communications director Gail Gitcho said in a statement. That’s more than twice the group’s fundraising in any previous January, including the last midterm cycle in 2010, according to Gitcho. This month, Christie already has raised $1.5 million from a swing through Texas, Gitcho said.


Christie more than doubled any previous January haul, and is off to a strong start in February. The money is pouring in despite relentlessly negative media coverage -- some of which is warranted, but much of which has been sloppy, or based on ridiculous and/or debunked allegations. As I've stipulated from the beginning, if Christie turns out to be lying about the extent of his involvement in or knowledge of the lane closures, no further analysis is necessary. He'd be persona non grata within the party, and his future ambitions would die a very sudden death. But if the various investigations fail to implicate him in the scandal, as they have thus far, his viability as a presidential candidate will depend on his ability to win back the independents who've fallen off the bandwagon in recent weeks. His brand is -- or was -- a strong, plain-spoken leader with cross-party appeal. He's talented enough to recapture that reputation if he weathers the current storm. What's interesting is the pro-Christie backlash from "core Republicans," among whom he's gained as his other polling points have taken a hit. Based on his impressive fundraising showing in January and early February, it also seems as though the party's donors haven't been scared off by a spate of tough headlines. I discussed these dynamics with Gretchen Carlson on Fox News yesterday afternoon:


Very few Republicans have contributed to Democrats' rumblings about booting Christie out of his RGA role; most have voiced support. His continued fundraising prowess will probably silence the critics -- unless some incriminating evidence drops. The RGA isn't the only Republican political operation performing well in the crucial money race. The RNC trounced the DNC in 2013:


The Republican National Committee beat the Democratic National Committee in 2013 fundraising by $18.4 million. The DNC told POLITICO on Friday that the committee raised $3.9 million in December — bringing its yearly fundraising haul to $62.2 million. That compares with the $80.6 million the RNC announced last week it had raised in all of 2013. The DNC has $4.7 million cash on hand, with $15.6 million in lingering debt from the 2012 cycle. ..The RNC has no debt, and has $9.2 million on hand.


UPDATE - One of the Left's latest scandal conspiracy theories is that Christie flew in a helicopter over the George Washington Bridge during the lane closures, perhaps to survey his wicked handiwork. Their hope was to "prove" that he had contemporaneous knowledge that there was traffic on the bridge. Swing and a miss. Again:


Governor Christie never flew over or near the George Washington Bridge during the September lane closures, the state police said Tuesday. “None of the three flights transporting the governor during that week flew over, or close to either the George Washington Bridge or Fort Lee, including the flight on 9/11,” state police spokesman Capt. Stephen Jones said in a statement. Leaders of the joint investigative committee investigating the lane closings said they would seek documents related to whether Christie flew in a helicopter near the traffic jam in September, which if true, might have contradicted Christie’s claim that he was unaware of the extent of the traffic.


They're throwing the kitchen sink at this guy, following the DNC's marching orders. Here's Nicole Wallace blowing up at MSNBC's Chuck Todd over the network's coverage of the story. "Rachel's not on 'til nine:"