Dem Senator: Maybe We Should Just Delay All of Obamacare For a Full Year 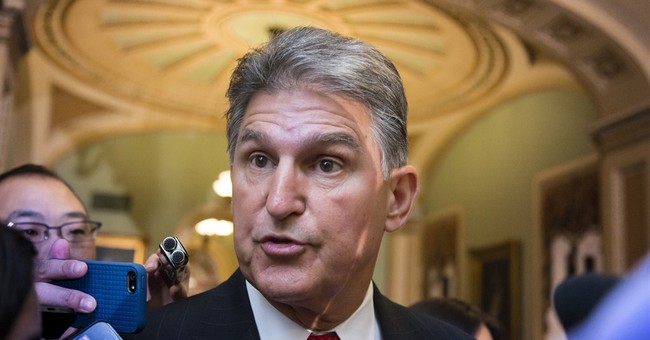 If only Republicans had thought of this idea when it was still logistically feasible, say, just before the law's horrific implementation roll-out. What a novel solution from Sen. Joe Manchin (D-WV), who was already on the record in support of an individual mandate delay:


“You’re just picking and choosing,” the West Virginia Democrat said of the administration’s decision. “First it’s basically the large employers, then it’s medium groups, then it’s 50 to 100 — medium-sized. If there’s a problem, there’s a problem.” He said there’s bipartisan support for legislation postponing the implementation of the entirety of the Affordable Care Act until 2015. “We’re sure in a transition period and they keep changing the dates,” the senator said, frustrated. “So I wish everyone would come to grips.”


Those quotes come via NRO's Betsy Woodruff, whose entire report is fascinating. Manchin's sprint from this law is no surprise, so what may be more newsworthy are the utterly incoherent comments from other Democratic Senators justifying the administration's latest unilateral postponement:

Senator Barbara Mikulski of Maryland, was unequivocally supportive of the move. “I think it’s more important than we get it done right than fast,” she told NRO. “So I support the president’s decision. Typically these businesses that have to negotiate and — so I support the president’s decision.” When I asked her if she thought it was valid to argue that delaying the employer mandate but not the individual one favors companies over individuals, she said, “I think I support the president’s initiative.” And Montana’s Senator Jon Tester was sort of on the fence, saying he trusts that the president has access to information that justifies the move the move. “You know, it’s probably the right thing to do,” he told NRO. “I mean, he probably looked at some metrics that caused him to make that decision."


This is jibberish. Mikulski's explanation is a tautology -- she supports the president's decision because she supports it. Asked if it was unfair to grant special reprieves to businesses, but not individuals and families, Mikulski shed additional light on her nuanced thinking, stating that she supports the president's decision. She displays not even a hint of concern over whether Obama's actions are lawful, or whether he's setting a precedent that future Republicans could invoke to simply impose their will on the country. Sen. Tester's response isn't much better. He thinks Obama "probably" did the right thing because he "probably looked at some metrics" that prompted the delay. How insightful. And what metrics might those be? Data indicating that medium-sized businesses would suffer if the employer mandate were implemented in 11 months -- which is already one year behind the legally-mandated schedule? If these requirements are bad for hiring and growth, why not repeal them? So much for Democrats' preposterous insistence that Obamacare will be terrific for employers and employees alike. Meanwhile, allies of a Democratic Congressman in a majority-Hispanic Florida district are running ads touting his work to "fix" the broken law. The spot boasts that he "took the White House to task" for its "disastrous" roll-out. Democrats are distancing themselves from their signature law, not "running on it," as Nancy and Debbie vowed:


Democratic partisans from Kirsten Powers to Ron Fournier are openly stating that they're growing weary of defending Obamacare, and mainstream reporters like Major Garrett are blasting away with both barrels:


The Affordable Care Act means what it says and says what it means. Until it doesn’t. The arbiter is President Obama and a phalanx of health care advisers and political strategists. Together, they try to implement what even Obama’s heartiest loyalists concede is an onerous and complicated law. They do this amid myriad Democratic midterm anxieties. And frothy Republican objections. But it’s time to concede that no one has been more adept or aggressive about delaying and defanging Obamacare than Obama himself. Systematically and with an eye toward his party’s immediate political troubles, Obama has reshaped, photo-shopped, reimagined, and reengineered Obamacare. It all sounds techy and cool and flexible—at least to the administration. To those who must live with and live under the law, the arbitrary is the norm. The only pattern is chaos. Obamacare’s worst enemy is Obama.


The New York Times chronicles the sundry delays and changes that have been made to Obamacare, while the Washington Post's pro-Obamacare editorial page expresses exasperation over the latest "cavalier" decision. When I wrote yesterday that virtually no one was impressed with the White House's imperial power play, it wasn't much of an exaggeration. I did fail, however, to account for people like Sen. Mikulski who avidly support the move, for reasons that she cannot articulate.