Fail: Latest Obamacare Delay Slammed By Pretty Much Everyone 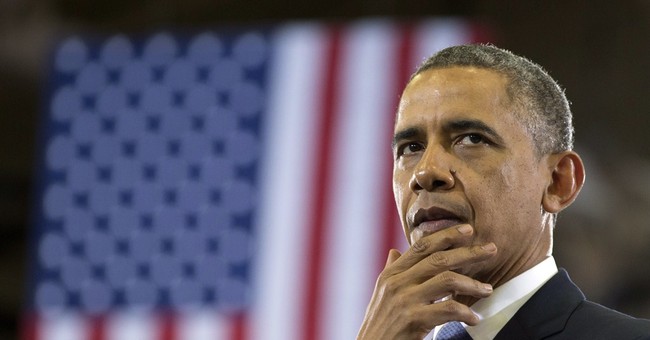 No one seems to be impressed with Barack Obama's fresh imperial machinations, wherein his administration has once again unilaterally delayed and altered Obamacare's employer mandate. Philip Klein restates the basics:


Under Obamacare, businesses with 50 or more workers are supposed to be subject to fines of $2,000 per employee (minus the first 30) if one of their workers obtains federal subsidies to purchase insurance on one of the new health insurance exchanges. The text of the law read that, the requirements, "shall apply to months beginning after December 31, 2013." ... The changes raise several important issues. To start, the employer mandate was put in place to prevent a scenario under which businesses simply dump workers into government-run exchanges. A constantly evolving weakened employer mandate makes dumping more likely. As designed, the employer mandate also gave businesses an incentive to reduce the number of its full-time employees so that they could get under the cap that triggers the mandate. But, with Democrats on the defensive over the failures of the health care law during the 2014 election year, it isn't surprising that the White House would want to avoid bad headlines and push back full implementation once again. In the past, I wrote that "Obama has turned his signature legislative accomplishment into a constantly evolving wikilaw, with editing privileges restricted to himself and a few administration officials." If Obama believes the employer mandate is a bad idea that needs to be repealed or severely changed, he should propose permanent changes rather than erratic piecemeal fixes.


The White House has loudly insisted that the healthcare law is not having any measurable deleterious impact on the US job market -- the new CBO report notwithstanding. But the new delay (especially this element of it) is very clearly designed to mitigate the exact consequences that Team O claims are figments of the right-wing imagination. David Freddoso asks a seemingly trite question, but it's actually pretty powerful: If Obamacare is so great, why does Obama keep delaying it? Click through for his analysis on America's full-time jobs shortfalls. CNN called this move "political" last night, and Time's Mark Halperin echoed that patently obvious sentiment on MSNBC this morning:

National Journal's Ron Fournier, a liberal who tends to be intellectually honest, writes that it's becoming increasingly difficult to defend this law:

It's getting difficult and slinking toward impossible to defend the Affordable Care Act. The latest blow to Democratic candidates, liberal activists, and naïve columnists like me came Monday from the White House, which announced yet another delay in the Obamacare implementation...Not coincidentally, the delays punt implementation beyond congressional elections in November, which raises the first problem with defending Obamacare: The White House has politicized its signature policy. The win-at-all-cost mentality helped create a culture in which a partisan-line vote was deemed sufficient for passing transcendent legislation. It spurred advisers to develop a dishonest talking point—"If you like your health plan, you'll be able to keep your health plan." And political expediency led Obama to repeat the line, over and over and over again, when he knew, or should have known, it was false...If not illegal, the changes are fueling suspicion among Obama-loathing conservatives, and confusion among the rest of us. Even the law's most fervent supporters are frustrated.


Which brings us back to a core question: Is this move lawful? The president barely even attempted to mount a legal or constitutional defense of his first employer delay last summer when briefly questioned by the New York Times. Sarah Kliff of the Washington Post's liberal 'Wonk Blog' explores the issue in a post today. She cites three experts, none of whom are confident Obama is acting within the confines of the law. She links to an op/ed by authored by former circuit court judge Michael McConnell after the White House unveiled round one of the employer mandate delay last July. McConnell attacked the move as an "abuse of power." She also quotes a law professor at the University of Michigan who questions the administration's flimsy defense of themselves; namely, that administrative changes and delays aren't unprecedented:


"There are challenges in the argument,” he says. “Affording transitional relief for a law that was enacted four years ago raised the question of, shouldn’t you have had your ducks in a row when you knew this was coming down the pike? There might be questions about whether a year is an appropriate delay, too.”


Liberal constitutional law professor Jonathan Turley has upbraided the Obama administration in the strongest of terms for its arrogation of power. "President Obama meets every definition of an imperial presidency," Turley told the Christian Science Monitor in January. "He is the president that Richard Nixon always wanted to be."