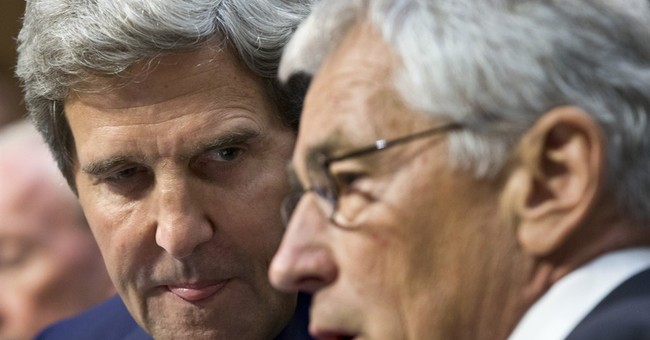 According to a pair of hot-off-the-presses public opinion polls, the American people are deeply skeptical of any additional US intervention in Syria's bloody civil war.  First up are the new numbers from ABC News and the Washington Post.  Note the bipartisan nature of the data on airstrikes; opposition levels among Republicans (43/55) and Democrats (42/54) are practically indistinguishable, with independents leading the way: 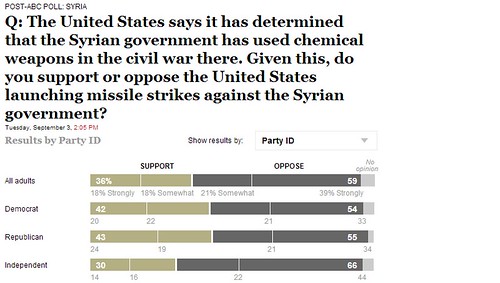 Support for airstrikes rises to 46 percent -- with a slim majority still opposed -- if countries like France and Great Britain joined our coalition.  The British Parliament voted down an intervention proposal late last week.  The least popular proposition is providing (additional) arms to the Syrian rebels, with fully 70 percent opposing the idea.   But that's apparently what the Obama administration is preparing to do, according to Sen. John McCain:


In a private meeting at the White House on Monday with Sen. John McCain, President Obama said he plans to give Syrian rebels more advanced weapons, according to McCain. If this happens, it would mark an expansion of Obama’s latest Syria strategy of possibly mounting a military response to Bashar al-Assad’s use of chemical weapons.  McCain and Sen. Lindsey Graham met with Obama to discuss the plan, which, as currently outlined by the White House, involves a limited mission to punish the Syrian regime’s use of chemical weapons, as the Syrian president did most recently on August 21, and deter future assaults. Administration officials have made clear that “regime change” is not an objective of the mission. But Obama’s new arming strategy would certainly help the rebels, whose goal is removal of the Assad regime. The White House didn’t respond to requests for comment Monday.

And who are these rebels?  The answer to that question is muddy at best, and "heinous Al Qaeda-affiliated jihadists" at worst.  The public appears to be unconvinced that the US has the capacity to distinguish between "good" and "bad" rebels -- a distinction that might not mean much if the worst elements continue to co-opt and disarm their more moderate allies.  On the subjects of arming rebels and unintended consequences, see: Libya.  Now let's turn to the Pew poll:

And here's why Americans aren't keen on airstrikes:

The final item is the most important one, in my book.  Even if we lob a few missiles into Syria, will it actually affect anything for the better?  What, precisely, do we expect to achieve?  The administration says "Assad must go," but insists that regime change isn't our goal, yet wants to arm the rebels (whose objective is regime change) -- but only the "good" ones.  Americans can be forgiven for viewing this posture as incoherent.  Also notice the worry that airstrikes might "lead to a long-term military commitment" in Syria.  The last thing the Obama administration wants is a protracted engagement with boots on the ground.  They want to take symbolic action, and little more.  But Sec. Kerry didn't help to allay Americans' concerns with this stunning answer at today's Senate hearing:

Secretary of State John Kerry refused to absolutely rule out the possibility of U.S. troops on the ground in Syria on Tuesday... “In the event Syria imploded for instance or in the event there was a threat of a chemical weapons cache falling into the hands of al-Nusra or someone else and it was clearly in the interest of our allies — all of us, the British, the French, and others,” Kerry said, “I don’t want to take off the table an option that might or might not be available to the President of the United States to secure our country.”  Kerry quickly walked it back, saying “The bottom line is the president has no intention and will not and we do not want to put American troops on the ground to be involved in the fighting of this Syrian civil war.”  Pressed on this point later by Senator Bob Corker, Kerry said “All I did was raise a hypothetical question about some possibilities and I’m thinking out loud about how to protect American’s interests.”

The first part of his answer is actually pretty responsible.  If we get involved militarily, and even if we don't, the US shouldn't take that possible contingency off the table.  But running away from that answer, and saying that he was just "thinking out loud" (!) is stunning.  High-stakes Senate hearings don't lend themselves to sloppy spit-balling.  That wasn't even the worst moment of the hearing:


Gen Dempsey, chairman of the Joint Chiefs of Staff, responding to Sen Corker: "I can't answer that - what we're seeking." #Syria


Kerry and Hagel also contradicted each other on whether airstrikes would constitute "war."  The Secretary of State also said a potential attack isn't about President Obama's red line (which it should be), but humanity's red line.  This is silly.  "Humanity" includes the pro-Assad Russians, and the anti-intervention Brits.  I'll leave you with a question, and two links:  (1) Why didn't all of these hearings and justifications happen in April, when the administration asserted that Assad's regime had unleashed two separate chemical weapons attacks?  (2) National Review's editors make the case for intervention. Key word: "credibility."  (3) John Bolton builds the case against intervention:


UPDATE - This hearing is brutal.  See this, this, and this.