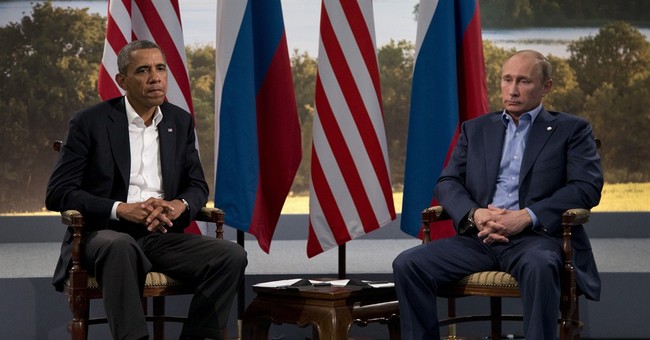 National Journal's Ron Fournier, a veteran DC journo who calls 'em like he sees 'em, hasn't been terribly impressed with President Obama's careening and incomprehensible handling of the crisis in Syria.  In an unsparing review, Fournier concludes that Obama has demonstrated himself to be naive and isolated. Behold what 'smart power' hath wrought:

Naive about the levers of power: Where to start? Obama reversed course on congressional authorization at the last minute, after a private chat with his chief of staff, and to the surprise of his national security team--all in violation of presidential best practices. He then left the country on a quixotic trip to Russia, allowing misgivings to grow in Congress and the public before he could build a case for striking Syria. Boxed in, Obama seized upon a Russian proposal to put Syria's weapons in the hands of the international community. It's an impractical solution, a fig leaf. Either Obama trusts Russian President Vladimir Putin (a mistake) or he is a partner in deceit (an outrage). A Democratic strategist who works closely with the White House, and who requested anonymity to avoid political retribution, told me, "This has been one of the most humiliating episodes in presidential history." ... As he faced an international and constitutional crisis, Obama and his team were in a familiar state: isolated, insular, and alone.


I've used the word "incoherent" quite often in describing the administration's ever-shifting Syria posture.  Fox News produced a montage that begins to capture the incoherence, albeit without some of the more memorable fumbles and contradictions:

Meanwhile, we're reportedly distributing "lethal aid" to certain Syrian rebel groups.  Have they been properly vetted?  Do we know if they run the risk of being disarmed and overtaken by Al Qaeda?  Would these be the same "moderate" rebels who feel abandoned by the US, whose leadership is fracturing, and who pledge to join forces with the radicals to take out Assad?  For those delusional few who are at least pretending to believe that Obama outfoxed Putin over Syria, it looks as though US-Russo relations have declined to a post-Soviet nadir.  So much for the "reset."  This is open, emboldened hostility:

Russia could expand arms sales to Iran and revise the terms of U.S. military transit to Afghanistan if Washington launches a strike on Syria, a senior Russian lawmaker said Wednesday.  Alexei Pushkov, the Kremlin-connected chief of the foreign affairs committee in the lower house of parliament, told lawmakers that Moscow hopes that the U.S. will back Russia's proposal for Syria to put its chemical weapons under international control for their subsequent dismantling.  During Wednesday's debate in the Russian parliament of a draft resolution on Syria, Communists called for an increase in Russian weapons supplies to Iran and a revision of conditions for transit via Russia of supplies for U.S. forces in Afghanistan.

Beyond that, as others have pointed out over the last 24 hours, experts have assessed that the process of "disarming" Syria of its WMDs in the middle of a civil war is essentially impossible.  And that's assuming that Assad would genuinely surrender all of the illegal weapons...that he wouldn't even acknowledge possessing until yesterday.  Keep in mind that his regime has been preparing for a possible US strike for days.  Might those preparations have entailed moving and hiding certain strategic weapons stockpiles?  As Ramesh Ponnuru has noted, Assad likely believes that his chemical weapons cache is a backstop against being overthrown and killed.  Are we to believe that he'd willingly surrender his heinous trump card, especially under Russian supervision?  Just three days ago, Obama's UN ambassador was slamming Moscow.  Now the Kremlin is the fulcrum on which a peaceful resolution hinges?  Even as they're threatening us, blowing kisses at Iran, and obstructing any meaningful action at the Security Council?  The entire proposition is risible, back to front.  Even many liberal writers can't avoid excoriating the president's Syria performance, averring that Obama "struck out" by getting "snookered," rendering his administration "dazed and confused."  One cutting line: "To say that the Obama administration is freelancing when it comes to foreign policy is an insult to freelancers."  Peggy Noonan says Obama should have just canceled last night's speech.  He didn't, the public mostly shrugged, and here we are.  I'll leave you with former New York Times editor Bill Keller listing the ways in which Putin just ate Obama's lunch.