IRS: Okay, We Also Spied on Conservative Groups After Granting Them Tax-Exempt Status 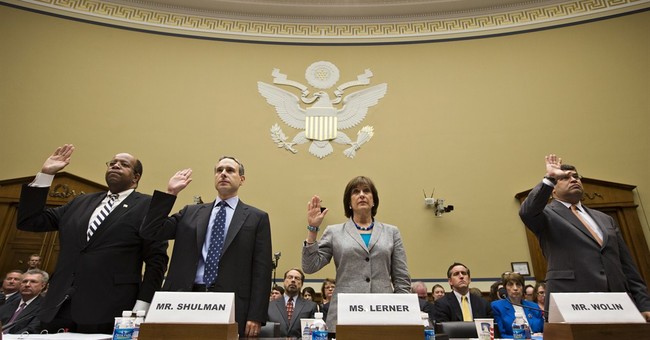 A new wrinkle emerges in the IRS scandal:

Republicans investigating the IRS targeting scandal said Wednesday that the agency continued to conduct secret surveillance on tea party groups even after approving them for tax-exempt status. Acting Commissioner Danny Werfel said he shut down the monitoring program after he found out about it, and said he has halted all audits of tax-exempt organizations based on political activity as he tries to get a handle on the embattled agency. Mr. Werfel, who was tapped four months ago to clean up the Internal Revenue Service after the targeting came to light, also told Congress he is troubled by emails sent by Lois G. Lerner, the woman at the center of the targeting scandal, that raise questions about her behavior. He said he has asked internal investigators to follow up on those emails...Mr. Werfel quibbled with calling the continued “surveillance” and said he didn’t see any evidence that groups on the list for scrutiny was improperly influenced by any IRS employees. But he said the program was troubling enough that he shut it down two weeks ago.


Wait.They just shut this practice down two weeks ago? So even as the public controversy over IRS targeting raged throughout the spring and summer, the agency was still secretly monitoring those fortunate Tea Party-aligned groups who actually received tax exemption approval. It sounds as if Werfel was blindsided by the existence of the monitoring program, forcing him to put a stop to it as he "tries to get a handle" on what the his organization has been up to. The committee report states that IRS higher-ups were "acutely aware" of President Obama's desire to crack down on conservative groups' funding in advance of the 2010 midterm elections. These latest revelations come on the heels of new questions pertaining to the exceedingly checkered relationship between IRS official Lois Lerner and the truth. Fox News had the report, which Carol touched on last week:


Embattled IRS official Lois Lerner appeared to be deeply involved in scrutinizing the applications of Tea Party groups for tax-exempt status, according to newly released emails that further challenge the claim the targeting was the work of rogue Ohio-based employees. One curious February 2011 email from Lerner said, "Tea Party Matter very dangerous" -- before going on to warn that the "matter" could be used to go to court to test campaign spending limits. ... The same email warned that "Cincy" -- presumably a reference to the Cincinnati IRS office -- should "probably NOT have these cases." That and other emails show Lerner and other Washington, D.C., officials playing a big role in dealing with Tea Party cases...Another February 2011 email from IRS official Holly Paz said "no decisions are going out of Cincy" until the D.C. office goes through the process. Lerner wrote back giving further guidance.


When the scandal broke in May, IRS brass -- Lerner included -- attempted to blame two "rogue" agents in Cincinnati for the misconduct. Lerner even claimed she'd been unaware of the targeting patterns until she read about them in the press. (Sound familiar?) These emails prove that she knew about them, and was in fact intimately involved in them, as far back as 2011. In other words, she lied. Again. The tranche of emails also point to Lerner's political leanings:


On July 10, 2012 then Lerner-adviser Sharon Light emailed Ms. Lerner a National Public Radio story on how outside money was making it hard for Democrats to hold their Senate majority. The Democratic Senatorial Campaign Committee had complained to the Federal Election Commission that conservative groups like Crossroads GPS and Americans for Prosperity should be treated as political committees, rather than 501(c)(4)s, which are tax-exempt social welfare groups that do not have to disclose their donors. "Perhaps the FEC will save the day," Ms. Lerner wrote back later that morning. That response suggests Ms. Lerner's political leanings, and it also raises questions about Ms. Lerner's intentions in a separate email exchange she had when an FEC investigator inquired about the status of the conservative group the American Future Fund. The FEC and IRS don't have the authority to share that information under section 6103 of the Internal Revenue Code. But the bigger question is why did they want to? After the FEC inquiry, the American Future Fund also got a questionnaire from the IRS.


According to a former colleague, Lerner's officious nature and pro-government proclivities have been hallmarks of her career as a federal bureaucrat over a span of decades. Democrats have claimed that the IRS targeting wasn't politically motivated, noting that some liberal groups faced scrutiny as well. The public doesn't believe the first assertion. The second is deeply misleading. Indeed, of the groups subjected to IRS abuse, more than 80 percent were right-leaning. One hundred percent of the 'targeted' lefty groups were eventually approved, whereas a majority of the conservative organizations were rejected or delayed indefinitely. Tea Party-type groups were also subjected to roughly triple the number of questions, and the IRS continued to secretly monitor the conservative groups who were lucky enough to receive a green light. Senior administration officials within the Treasury Department became aware of the Inspector General's investigation into alleged IRS abuses months before the 2012 election. The White House has insisted that it did not order, and was not aware of, the targeting. Americans are skeptical of this claim, perhaps because the administration has changed its story about when it did finally find out at least five times.