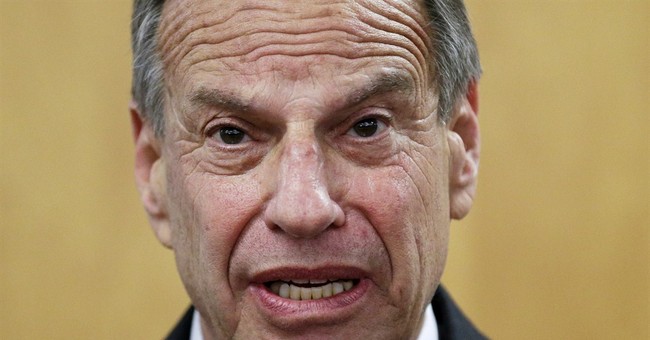 Well, he's been out of "rehab" and in mediation talks for some time, so we knew something was coming.  Is a resignation from America's most infamous great-granny-grabber imminent?  According to San Diego's NBC Affiliate, yes it is:

San Diego Mayor Bob Filner has agreed to resign as part of a deal reached this week with city officials, NBC 7 News has learned. Filner, spotted leaving City Hall with packing boxes Wednesday night, will formally vacate the office following a closed session of City Council Friday, according to several sources. City officials announced just before 7 p.m. Wednesday a proposed solution had been reached in the scandal that has consumed the city of San Diego since it first broke July 10.  In the last six weeks, more than a dozen women have come forward with tales of alleged sexual harassment and unwanted sexual advances.  Filner has admitted to disrespecting and at times intimidating women, saying that he needed help. He announced he would enter a treatment program for an undisclosed disorder or illness.

The Los Angeles Times provides a window into the possible deal Filner struck:

At issue in the mediation talks was the possibility of Filner's agreeing to resign in exchange for the City Council agreeing to pay some of his legal fees and potential damages in the sexual harassment lawsuit filed against him by Irene McCormack Jackson, his former director of communications. The end of the mediation came late Wednesday afternoon after three days of closed-door negotiations between Filner, his three attorneys, City Atty. Jan Goldsmith and two City Council members. Mediation was overseen by retired federal Judge J. Lawrence Irving, who donated his time. The council will vote on the deal in closed session Friday.

So the guy might be exiting stage left not out of shame over betraying the public trust and abusing numerous women, but for undisguised financial considerations.  Stay classy, Bob.  The putative deal would at least spare taxpayers the cost and rigmarole of a lengthy recall drive, which kicked off last week.  After Filner's sixteenth accuser came forward, Nancy Pelosi and the Democratic National Committee at long last summoned the moral courage to demand that he step down. After two more women accused the 20-year Congressman of sexual harassment -- bringing the total to 18 mistreated women -- Virginia's Democratic gubernatorial nominee Terry McAuliffe (who is, ahem, a close ally of the Clintons) called on Filner to resign.  McAuliffe only did so after his Republican opponent applied some pressure over the issue.  What remains unclear is when Democratic Party leadership first learned of Filner's pattern of abuse.  At least three alleged victims say they warned the San Diego Democratic establishment about him years ago, and a long-time party strategist casually mentioned on CNN that Filner earned a bad reputation among Beltway Democrats over his two decades in Congress.  Yet the national and local party continued to endorse and fund his re-election bids.  How many gropings does it take to throw a habitual disrespecter of women out on his ear?  At least 18, plus a media firestorm, it would seem.  One final note from the local NBC station: Lost in the appalling accounts of Filner making unwelcome advances on everyone from senior citizens to rape victims is the minor detail that he is also under investigation for the more pedestrian infraction of...engaging in illegal pay-to-play politics:

Filner has admitted to disrespecting and at times intimidating women, saying that he needed help. He announced he would enter a treatment program for an undisclosed disorder or illness. Under investigation for alleged “pay to play” schemes with developers, Filner disappeared from public view for three weeks and surfaced Monday in time for a mediation session with city officials.

Perverted and corrupt. (Allegedly!) What a charmer.  Parting thought:

How many accusers would it take for women to be able to file a class action lawsuit against Bob Filner?