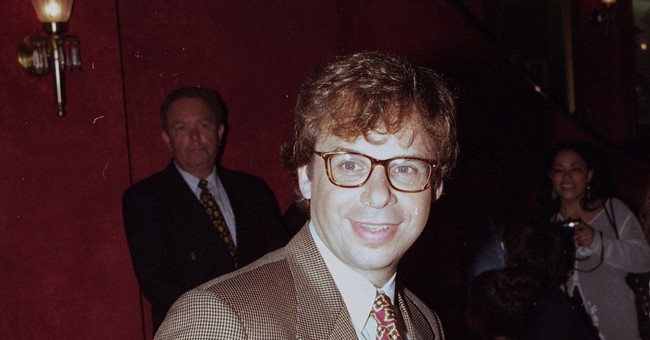 On Thursday, police say actor Rick Moranis was sucker-punched in the head while he walked down a serene Manhattan street in broad daylight. Maranis, 67, is best known for his roles in Ghostbusters, Ghostbusters II, Spaceballs, and Honey, I Shrunk the Kids.

According to the New York City Police Department, Moranis was accosted while he walked down Central Park West near W. 70 street in the Upper West Side neighborhood, an area known for its high-priced real estate and luxurious, safe setting.

NYPD Crime Stoppers released the video of the alleged incident, which shows a masked man in an "I Love NY" shirt appearing to attack someone, then walking calmly along his way.

Moranis's attack drew attention and support from fans across the internet. The Canadian actor, known for playing diminutive, nerdy characters in many beloved comedies of the 1980s and 1990s, almost completely retired from show business abruptly after his wife died of cancer in 1991. For 23 years from 1997-2020, he took only a handful of roles as a voice actor. He is now set to star in the upcoming sequel to the Honey, I Shrunk the Kids series of films, reprising his role.

At the time of his sudden leave from a flourishing career in Hollywood, Moranis explained that as a newly single parent, raising his two children would be his priority from that point on.

Fans offered words of encouragement and jestful desires for vengeance against his attacker, expressing their adoration for his much-beloved characters like Louis Tully in Ghostbusters.

Rick Moranis is literally the most harmless person on earth and he gets brutally punched in the head by some thug in New York City. Thanks for keeping the streets safe for criminals, De Blasio.

Rick Moranis is a king and this guy needs the book thrown at him. https://t.co/SJBxcaXTwm

so help me if i ever saw someone lay a hand on Rick Moranis. https://t.co/9nhsDnSmKy

The internet coming together to find the guy who punched Rick Moranis. pic.twitter.com/sTEmZWOFvu

What the actual eff. Do NOT ever harm Rick Moranis! https://t.co/PgkaJT68dL

Moranis is said to have suffered minor injuries to his neck, head, and back as a direct result of the attack. The NYPD has not yet apprehended a suspect but has offered a $2,500 reward through Crime Stoppers.