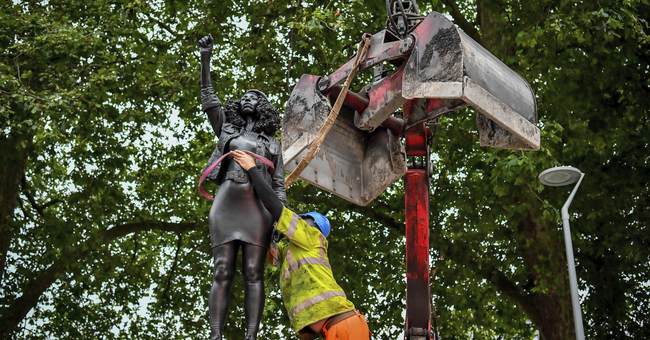 The City Council in Bristol, England chose to uphold the values of their citizens and the rule of law this week when they removed an illegal, unsanctioned protest statue. The statue, created in the image of Black Lives Matter activist Jen Reid, was placed without approval on a pedestal that had previously been vandalized by statue-toppling rioters.

The Bristol statue of 17th century philanthropist Edward Colston was erected in 1895, a memorial to his financial contributions to charities and schools in Bristol during his life. Like many wealthy Europeans during that point in history, Colston was involved in the Atlantic slave trade, a legacy that soured his once philanthropic reputation. That part of Colston's history became widely publicized and disparaged beginning in the 1990s and calls for the removal of his statue began shortly thereafter.

Rather than wait for the Bristol City Council to hear from the citizens of their city, however, and make a choice about what to do with the 125-year-old statue, vandals and rioters took matters into their own hands. Operating under the guise of achieving racial justice in the name of George Floyd, they toppled the Colston statue and chucked it into the Bristol Harbor in early June. They also painted graffiti with myriad accusations of racism and bigotry on the statue base.

But unlike the statue destroyers that have come to be embraced by elected leaders in the United States, the mob set against destroying monuments in Bristol went one step further. They created their own replacement statue and hoisted it onto the pedestal involuntarily vacated by Colston last month.

On Wednesday, protesters snuck back to the previous site of Edward Colston's statue in Bristol and installed their own replacement: a statue created by London artist Marc Quinn of Black Lives Matter activist Jen Reid with her fist raised in the air. Protesters and other advocates of statue destruction and various other forms of "racial justice" celebrated the sneaky, extra-legal move on the part of the protesters.

But the Bristol City Council saw it a bit differently. They saw the illegal placement of a politically charged statue in the place where one that had been vandalized and removed as a no-go for their community. The statue of Colston, still beloved by many in Bristol and admirers of history and art throughout the world, was funded and approved by the public more than a century ago.

I guess that didn’t go as planned...

The Bristol statue of BLM protester Jen Reid has been removed by the council after 24 hours https://t.co/ImNNRJP35z

Bristol Mayor Marvin Rees agreed with the decision, saying that while Reid's activism was notable, no permission was given for the public placement of her likeness.

The decision of the Bristol City Council and the support of the mayor seems almost antithetical to the rhetoric currently being delivered by Democratic leaders in the United States. House Speaker Nancy Pelosi flippantly responded to the vandalization and destruction of a Christopher Columbus statue in her home city of Baltimore when a reporter asked if a commission or the City Council should have been involved.

"People will do what they do," Pelosi said, ignoring the blatant acts of vandalism and destruction of property involved in the removal of the statue. Pelosi and other prominent Democrat members of Congress are known for repeatedly saying "no one is above the law" when referencing President Trump's tax records and forming partisan attacks against conservatives. However, when leftist protesters deface statues and burn cop cars, that refrain is seldom heard from the left.

Condoning crimes such as trespassing, vandalization, and destruction of federal and private property has become commonplace among leftist American lawmakers looking to placate activists in recent days. President Trump has stood firm in his vow to punish lawbreakers, with varying support from members of the Republican Party.

Black Lives Matter activists bemoaned the removal of the statue of Reid just one day after it was illegally placed, before they got a chance to travel to the rural English community to see it. The council said the statue "will be held at our museum for the artist to collect or donate to our collection."