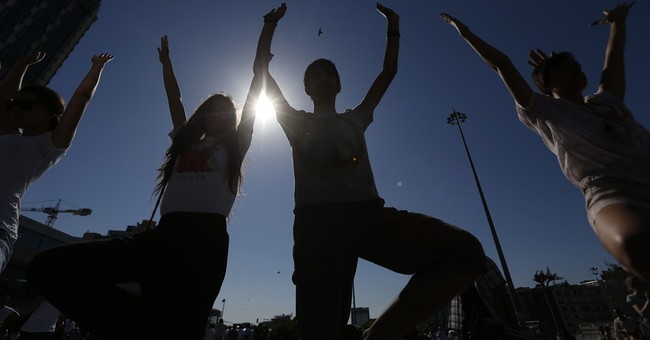 What are some of the academically rigorous and challenging classes students can take at one of our oldest and most prestigious Ivy League institutions? Well, if you’ve matriculated at Brown University this fall, you can apparently enroll in a nude yoga class as early as next month (via Huff Po):

Brown University is about to play host to a week-long celebration of nudity.

The "Nudity in the Upspace" week goes from Sept. 30 to Oct. 5 on the Ivy league campus in Providence, R.I. The organizers write on the Facebook page the week intends to confront stigmas about the naked body and open a space space for discussions on it, with "All bodies welcome!"

So what will go on at nudity week?

On Tuesday, Oct. 1, there will be a nude yoga class that promises to "stretch your body perhaps in ways that it hasn’t been stretched before." Organizers will provide mats, but ask attendees to bring a towel.

There will be nude cabaret, nude open mic night, nude body painting, personal testimonies about nudity and a panel on how issues like race and class intersect with nudity and body image.

In fairness, Brown University is a private institution. So shouldn’t school administrators be allowed to offer any “academic” class they deem intellectually stimulating and worthwhile? Plus, if you’re a student on campus personally offended by nudity, you don’t have to participate. (I can’t imagine any of these events are compulsory, right?) At the same time, one would think most students are probably already familiar with this kind of holistic approach to learning; after all, this isn’t exactly the first time Brown University (or other Ivies) have offered events like this. Back to the article:

“It’s been incredible to learn that being naked is just fun!" Pacheco-Fores told the Daily Herald in September 2012. "Penises, vaginas, boobs, butts -- body parts that used to make me feel awkward and uncomfortable before now I just see as another part of another beautiful body."

Brown's nudity event is somewhat rare among collegiate campuses. Brown already has a Sex Week in March, which is not unlike similar events at other Ivy League schools like Harvard University, the University of Pennsylvania and Yale University -- the originator of the college Sex Week.

Whatever floats your boat, I suppose. But religious families looking at colleges might want to reconsider where they send their kids to school. The Ivy League, it seems to me, might not be the best place for them.