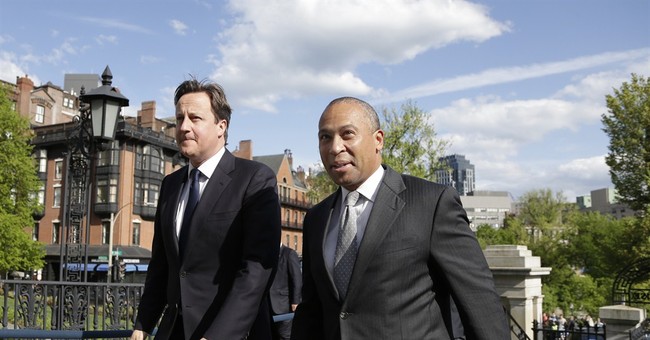 Massachusetts is one of the most frustratingly blue states in America. In 2012, for example, Bay State voters ousted a moderate, Republican Senator with sky high approval ratings and bipartisan credentials -- and replaced him with a bleeding heart progressive with far-left views. Even worse, there are no Republican Congressmen or Senators currently serving in Washington. And both the state legislature and executive are controlled by Democrats.

Gov. Deval Patrick says he will support a requirement that photo identification be placed on Electronic Benefit Transfer Cards used by welfare recipients, but is asking lawmakers to amend the proposal before he signs it.

The amendment would require state officials to conduct a review after three years of the effectiveness of photo identification on the cards.

Patrick also said Thursday he would request $2.5 million to implement the requirement, which was attached to a $125 million spending bill to cover outstanding costs for the fiscal year that ended June 30.

Supporters of requiring photo IDs on EBT cards say it will help cut down on fraud and abuse.

Incredible! And apparently no one has yet labeled Governor Patrick a “racist” or “bigot” for coming out in favor of such a “draconian” proposal. In all seriousness, though, this is an unexpected and important first step in cutting back waste, fraud and abuse in Massachusetts. At the national level, welfare recipients have been known to spend their “earnings” on strippers, alcohol, and yes, pornography. With little accountability and oversight, the program continues to frustrate and enrage taxpayers. And yet as far as commonsense proposals go, this is something both parties can and should support. Certainly, Governor Patrick deserves credit for publicly endorsing this requirement.

By the way, Massachusetts is just one of many states where citizens do not have to identify themselves at the voting booth. For their part, liberals often argue that voter I.D. laws are inherently discriminatory -- a modern day “poll tax” of sorts which Republicans invariably support to disenfranchise millions of Americans. Not true. But if that is the case, how is showing a photo I.D. when one receives welfare benefits any different from when one casts a vote? Wouldn’t the former be equally as discriminatory as the latter if liberals are correct? Governor Patrick said two years ago he wouldn’t support any legislation or sign any bill into law “that makes it harder to vote.” He can’t have it both ways. Either voter/EBT I.D. laws minimize fraud and abuse -- or they don’t. And his decision to publicly endorse one measure -- and not the other -- is hypocritical.