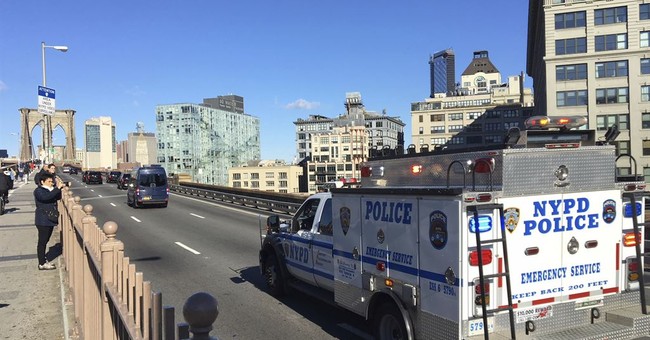 Three NYPD officers were attacked during a "Stop the Violence" march on the Brooklyn Bridge on Wednesday. Chief of Department Terry Monahan, who was marching with pro-police clergy, was among the injured. Monahan had recently taken a knee in "solidarity" with protesters at another protest. On Wednesday he was hit with canes, bats and debris, according to ABC7 News. Thirty-eight people were arrested in the mayhem.

This is not peaceful protest, this will not be tolerated. pic.twitter.com/cYuDX8G7ku

These are the injuries our officers sustained. pic.twitter.com/KI9wQKywHH

Violence against police has been commonplace the past month. Two officers were just ambushed and killed in Texas last week.

Since the shocking Minneapolis police killing of George Floyd, in which officer Derek Chauvin pressed his knee against Floyd's neck for several minutes, even after his body became lifeless, the Black Lives Matter movement and other activists have called for the defunding of police. Mayor Bill de Blasio recently signed off on a $1 billion budget cut for the NYPD. He also agreed to release hundreds of inmates from Rikers Island to prevent the spread of the coronavirus. Many of those freed prisoners have gone on to commit hundreds of more crimes.

Defunding or even abolishing the police, as some activists have insisted, is condemned by many more Americans as counterproductive and dangerous. The only time we should even consider slashing the budget of our police, says defense attorney Ted Williams, is "when there's no more crime."

For a more productive response, look to the work being done by Sen. Tim Scott (R-SC), the only black Republican senator in Congress. His recently unveiled JUSTICE Act which provide more training for officers, as well as demand more transparency for police departments. Democrats didn't even agree to a debate on it.