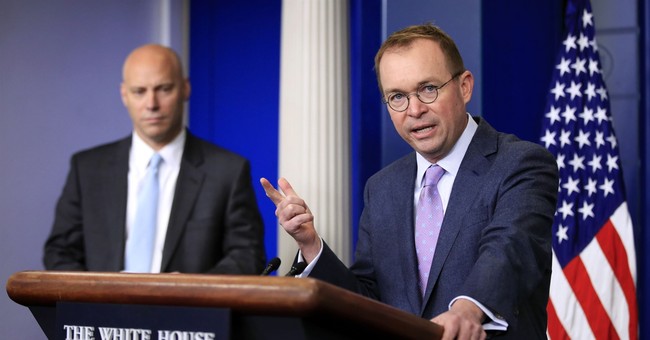 The 2020 G7 summit will be held at the Trump National Doral Miami golf resort in Miami, Florida in June, acting White House Chief of Staff Mick Mulvaney announced on Thursday. The administration arrived at the decision after meeting with Trump about their list of finalists.

“The focus of the event will be global growth and challenges to the global economy,” Mulvaney explained.

That will include reopening energy markets, rolling back regulations, and ending trade barriers.

Yet, the press was stuck on Doral. Several reporters asked about the appropriateness of Trump hosting the G7 at one of his own properties. As Fox News reporter Kevin Corke noted, even the appearance of impropriety here is "wince inducing."

Mulvaney acknowledged that the president "knows" he's going to get a lot of negative pushback for the decision, but that it won't change his mind.

Others questioned whether it will profit the president.

.@EamonJavers asks White House chief of staff Mulvaney how this is not "just an enormous conflict of interest" and how will Trump criticize the Bidens for self-dealing after this move.

Mulvaney says Trump's brand is already "strong enough as it is" and there won't be any profit. pic.twitter.com/3MH8motsPZ

It was the president who mentioned Doral at one of their meetings, Mulvaney shared, and his staff were intrigued.

"You know what?" Mulvaney recalled they said at the time. "That’s not the craziest idea we ever heard. We’ll take a look at it."

It will be "dramatically cheaper" for the White House to hold the summit at Doral as opposed to their other finalists, he added.

Still, the press shared some doubts and wondered whether there was "precedent" for the White House's decision. Mulvaney said no there wasn't, but that Doral was the "best place" for the occasion.