Army to DC Residents: You May See Tanks on the Street Tonight 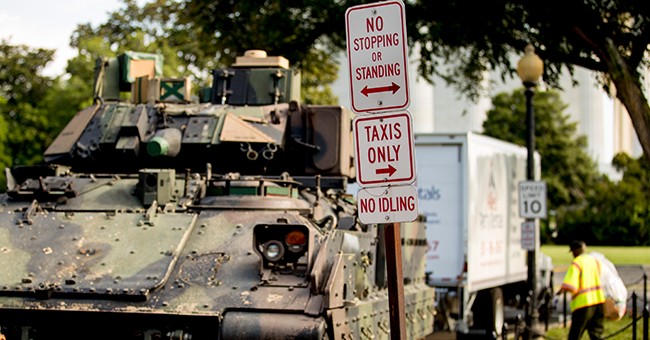 The Fourth of July celebrations officially start tomorrow, and for the first time in recent memory, a sitting president will be directly participating in the festivities. President Trump plans to take full advantage of the occasion, with a keynote speech in front of the Lincoln Memorial. He's also authorized military tanks to be on display in the nation's capital. The U.S. Army alerted citizens that they may catch a glimpse of one of those vehicles in their neighborhoods tonight. But, it's no cause for alarm, they insist.

The military tanks will be on full display in the nation's capital on Thursday, as well as bombers, military jets, and other demonstrations of American force. It's not completely clear how the patriotic spectacle is going to be financed, but a Washington Post reports suggests that $2.5 million of it will come out of the National Park Services fund.

Democrats are questioning the festivities and are accusing the president of turning America's birthday into his own political rally. Former HUD Secretary Julián Castro (D-TX), who's currently running for Trump's job, called it a "waste of money" that would be better served going toward D.C.'s homeless population.

Local lawmakers agreed and added that the tanks were a bit excessive.

NEW: “I am dismayed and alarmed that President Trump is attempting to hijack our nation’s 4th of July festivities to further divide our people with a grandiose display of military power.” - @CMdgrosso #4thofJuly pic.twitter.com/awZIEzbVZI

Trump is ignoring the criticism and looking forward to addressing what is expected to be a massive audience.

Our July 4th Salute to America at the Lincoln Memorial is looking to be really big. It will be the show of a lifetime!