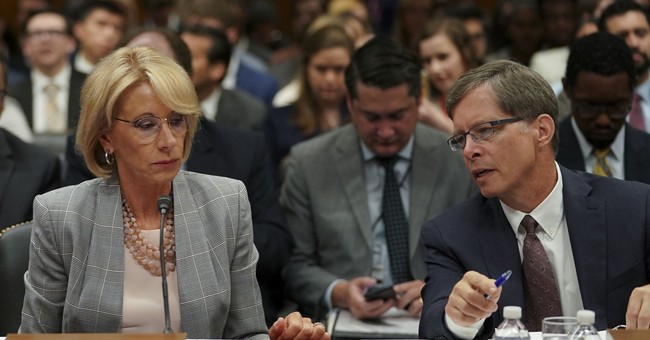 A provision in the Elementary and Secondary Education Act mandates that equitable services providers cannot be affiliated with religious organizations. But, since the Supreme Court ruled in favor of Trinity Lutheran in 2017's Trinity Lutheran of Columbia, Inc. v. Comer, the Department of Education decided to end that policy.

Secretary of Education Betsy DeVos proudly made the announcement at the Council for American Private Education (CAPE) State Directors Annual Meeting on Monday.

"The Trinity Lutheran decision reaffirmed the long-understood intent of the First Amendment to not restrict the free exercise of religion,” DeVos said. “Those seeking to provide high-quality educational services to students and teachers should not be discriminated against simply based on the religious character of their organization.”

Today we reaffirmed this Admin’s commitment to protecting the #FirstAmendment & notified Congress we will no longer enforce the unconstitutional provisions in the ESEA barring religious orgs from serving as contract providers for equitable services. https://t.co/je4M25XGV7

Trinity vs. Comer centered on how a Missouri program denied a grant to Trinity Lutheran Church for playground improvements. The Supreme Court eventually ruled in favor of the religious school, arguing that Trinity had a right to the state funding via the Free Exercise Clause of the First Amendment.

“The Free Exercise Clause ‘protect[s] religious observers against unequal treatment’ and subjects to the strictest scrutiny laws that target the religious for ‘special disabilities” based on their ‘religious status,’" Chief Justice John Roberts reminded the court at the time.

First Liberty Institute praised the Trump administration for their decision.

“Once again the Trump administration has made it clear that religiously affiliated businesses and organizations cannot be excluded from equal participation in government programs simply because they are religious," President and CEO of First Liberty Institute Kelly Shackelford said in a statement Tuesday. "The Department of Education’s guidance applies U.S. Supreme Court precedent and explains that government hostility toward religion is unconstitutional. First Liberty Institute applauds the administration and stands ready to defend people of all faiths and their right to live according to their beliefs, including in those in public service.”