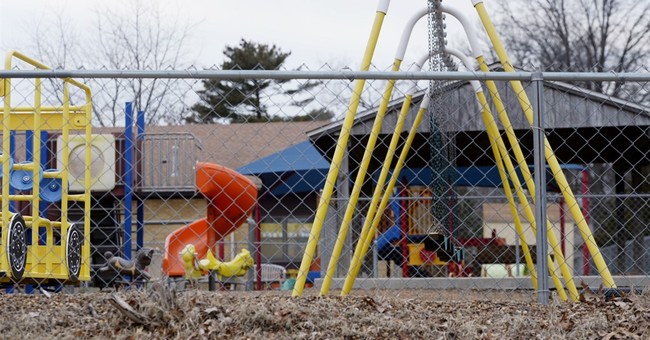 The case began in 2012 when Trinity Lutheran Church applied for a Missouri Department of Natural Resources state grant meant to help public and private schools, nonprofit daycare centers, and other nonprofit entities buy rubber playground surfaces made from recycled tires.

The grant application was denied because the Department had a provision in place that "no money shall ever be taken from the treasury, directly or indirectly, in aid of any church, sect, or denomination of religion." The Supreme Court ruled today that this state policy violates the rights of Trinity Lutheran under the Free Exercise Clause of the First Amendment.

Chief Justice Roberts explains in his opinion that “the Free Exercise Clause ‘protect[s] religious observers against unequal treatment’ and subjects to the strictest scrutiny laws that target the religious for ‘special disabilities” based on their ‘religious status.’”

“Applying that basic principle,” he writes, “this Court has repeatedly confirmed that denying a generally available benefit solely on account of religious identity imposes a penalty on the free exercise of religion that can be justified only by a state interest ‘of the highest order.’”

Roberts acknowledges that the consequence of the state’s decision is “in all likelihood, a few extra scraped knees,” but concludes “the exclusion of Trinity Lutheran from a public benefit for which it is otherwise qualified, solely because it is a church, is odious to our Constitution all the same, and cannot stand.”

Roberts specified, however, in a footnote, that “this case involves express discrimination based on religious identity with respect to playground resurfacing. We do not address religious uses of funding or other forms of discrimination.”

Justice Neil Gorsuch, joining Roberts’ opinion in part, wrote that “Missouri’s law bars Trinity Lutheran from participating in a public benefits program only because it is a church. I agree this violates the First Amendment and I am pleased to join nearly all of the Court’s opinion.”

Justices Sotomayor argued in her dissent that the case “is about nothing less than the relationship between religious institutions and the civil government—that is, between church and state.”

“The Court today profoundly changes that relationship by holding, for the first time, that the Constitution requires the government to provide public funds directly to a church,” she argued. “Its decision slights both our precedents and our history, and its reasoning weakens this country’s longstanding commitment to a separation of church and state beneficial to both.”

“The Church has a religious mission,” she concluded, “one that it pursues through the Learning Center. The playground surface cannot be confined to secular use any more than lumber used to frame the Church’s walls, glass stained and used to form its windows, or nails used to build its altar.

The ruling sets a precedent against strict interpretations of the Blaine amendment in other states which may aid a wider participation of churches in state programs.

Judicial Crisis Network’s Carrie Severino spoke with Townhall in April about the significance of this case. She explained that the amendment was originally an attempt by Speaker of the House James G. Blaine in 1875 to prevent aid to religious institutions that failed in Congress, but state legislatures passed versions of it and 37 states currently have similar provisions in their constitutions.

Severino called today’s decision "a strong decision in defense of religious freedom, reminding states that they cannot exclude groups or individuals from public benefits simply because of their religion.”

“While it is concerning that two justices on the Court are unwilling to embrace this commonsense application of the First Amendment, I am heartened to see the Court as a whole standing behind our first freedom," she concluded.

Prof. Michael Moreland, Professor of Law and Religion at Villanova University called the decision “a straightforward application of a non-discrimination principle regarding public funding.”

“The Chief Justice’s opinion states that religious institutions cannot be singled out for disfavored treatment for public benefits simply because they are religious. It is also significant that this understanding of the First Amendment was shared by seven members of the Court. Only two justices in dissent held out for a strict separationist no-funding rule against religious institutions,” he pointed out.

“The Supreme Court’s decision today affirms the commonsense principle that government isn’t being neutral when it treats religious organizations worse than everyone else,” said Alliance Defending Freedom Senior Counsel David Cortman, who argued before the Supreme Court on behalf of Trinity Lutheran Church in April. “Equal treatment of a religious organization in a program that provides only secular benefits, like a partial reimbursement grant for playground surfacing, isn’t a government endorsement of religion. As the Supreme Court rightly found, unequal treatment that singles out a preschool for exclusion from such a program simply because a church runs the school is clearly unconstitutional.”

Dr. Grazie Pozo Christie, Policy Advisor with The Catholic Association, called the decision "a win for people of faith who join together to do good through their ministries and civic associations." She added, "today the Court indicated that excluding Christian schools like Trinity Lutheran from government grants using anti-Catholic Blaine amendments is discriminatory, and unworthy of our great country."

Regardless of the religious freedom implications of this ruling these children who participated in demonstrations on behalf of Trinity Lutheran will likely be pleased by the decision.