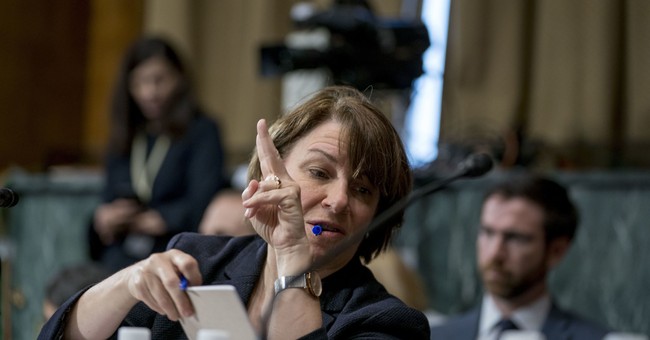 Sen. Amy Klobuchar (D-MN) reportedly has a temper. Several of her former staffers have dished to the press all about their old boss's "demeaning" treatment of them. Some even recalled how Klobuchar threw a binder that accidentally hit one of her staffers.

At a CNN town hall on Monday, someone confronted her about the rumors, especially after the senator recently threw her hat in the ring for the 2020 presidential election.

“Am I a tough boss sometimes? Yes. Have I pushed people too hard? Yes,” Sen. Amy Klobuchar says about her leadership style. “But I have kept expectations for myself that are very high. I’ve asked my staff to meet those same expectations." #KlobucharTownHall pic.twitter.com/zBQ0rbvcq7

“Am I a tough boss sometimes?" Klobuchar asked. "Yes. Have I pushed people too hard? Yes. But I have kept expectations for myself that are very high. I’ve asked my staff to meet those same expectations, and that — the big point for me is I want the country to meet high expectations because we don’t have that going now."

Some amusingly noted that it seemed as though the senator was on the brink of another temper tantrum.

Watch her on the brink of snapping as she tries to defend why she snaps. #KlobucharTownHall pic.twitter.com/bnPBn3cTYN

Klobuchar's behavior was so pervasive on Capitol Hill that it was the inspiration for a joke on "Veep" a couple of years ago. Executive producer David Mandel admitted to Slate last week that after hearing the outrageous rumor about how Klobuchar asked a staffer to shave her legs, he wrote it into the show for the main character Selina Meyer.